Climate change: How did we get here? 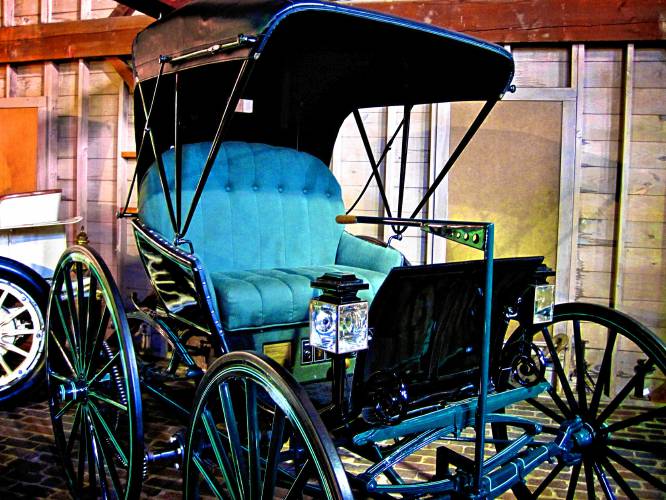 An 1893 Duryea motor wagon built in Springfield, one of the first gasoline-powered automobiles. Gasoline and diesel vehicles are a major source of increased carbon dioxide in the earth’s atmosphere. Via Tsuji /Creative Commons

Climate change is very much in the news, with the tumultuous politics in Washington, dramatic reports of melting ice caps and sea level rise, and growing concern about “extreme” weather events. As confirming data arrive daily, society is grappling with the complex challenges of this Earth-altering reality. With all the climate change issues coming at us, it’s worth looking at how this dramatic change in the Earth’s atmosphere came about.

Since the start of the British Industrial Revolution, in 1760, carbon dioxide (CO2) in the atmosphere has increased 43 percent, from 280 parts per million (ppm) to 400ppm. This is exceeding what plants, through photosynthesis, and the oceans can absorb. CO2 at these levels results in the Earth’s carbon cycle being out of balance. CO2 absorbs the sun’s heat and re-emits it back into the atmosphere: the more CO2 in the atmosphere, the more heat is re-radiated. The result is the “greenhouse effect” and a warmer climate. For a planet that has naturally balanced carbon input and output over millennia with lower CO2 levels, this is a problem. A look at our own Valley shows how this has happened.

At the heart of this story is the use of fossil fuels to produce energy to do work. Most of the fossil fuels we use today were created during the Carboniferous period that ended about 286 million years ago, and the Cretaceous period, ending 70 million years ago. Oil deposits were formed when massive amounts of microscopic marine plant and animals died and fell to the ocean floor. These deposits were covered with sediments, and over the course of millions of years, pressure and heat chemically reduced them to a largely carbon-based substance, oil. Coal is the land-based version of this process where the plants in forested swamps fell to the swamp floor and were covered by sediments. The pressure and heat from geological forces chemically transformed the ancient plants to coal. For millions of years, massive amounts of carbon were stored as coal and oil below these sedimentary layers. This is why fossil fuels are non-renewable: When they’re gone, they’re gone.

We’re now in the Holocene Epoch, which began 11,700 years ago, at the end of the last ice age. The Holocene is considered a “sweet spot” in the development and expansion of human societies due to a relatively long period of climate stability. During this time the Connecticut River Valley has dramatically changed, setting the stage for the creation of the Valley we live in today.

With the retreat of the glaciers, over a period of thousands of years, tundra turned to forests, rich soils developed, water supplies were bountiful and wildlife populations thrived. The Connecticut River evolved into a 420-mile-long ecological and transportation thoroughfare. Native American hunter-gatherers migrated into the region more than 13,000 years ago, adapting to the new landscape..

In 1614, the Dutch began exploring the Connecticut River and establishing trading posts along its shores. The English from eastern Massachusetts were not far behind, establishing the settlements of Hartford in 1635 and Springfield in 1636. The settlement by the English of the resource-rich Connecticut River Valley was underway. Although it could not be foreseen by these early settlers, they were creating the foundations for the Industrial Revolution in the Valley and the role it would play both in creating prosperity and releasing carbon stored underground by burning fossil fuels.

By the mid-1800s the Industrial Revolution was flourishing in the Valley. The transformation of the United States from a decentralized rural agricultural economy to a more centralized urban industrial economy was underway. Mills and factories dotted the shores of the Connecticut and its tributaries to take advantage of water power and firewood from surrounding forests. The switch to coal was made possible by the establishment of coal-fueled railroad distribution systems. Edwin Drake drilled the first successful oil well, in Pennsylvania, in 1859. In 1870, John D. Rockefeller consolidated the distribution of oil products with the founding of the Standard Oil Company. In 1893, in Springfield, Charles and Frank Duryea built the first successful gasoline-powered automobile and introduced the practice of mass production to the fledgling automobile manufacturing industry.

The good news is that, through inventiveness and sometimes skullduggery of the Industrial Revolution, we have immeasurably benefited from the outcomes, with the results incorporated in our daily routines. But in the process, we have become dependent on fossil fuels and disrupted the Earth’s carbon cycle by releasing large amounts of CO2 into the atmosphere.

There’s reason for optimism. Although it may not be obvious today, our grandchildren may look back on this current era as the time when society focused on creating a Renewable Resource Revolution. Despite resistance from entrenched interests, we’re already seeing great progress in the solar, wind, electric, storage battery and other arenas. Entrepreneurs are seeking alternatives to fossil fuels, finding solutions and opportunities much like their Industrial Revolution predecessors. Although we’re unlikely to achieve pre-Industrial Revolution atmospheric CO2 levels, we can achieve levels to sustain a livable planet. We have no other choice.

Tom Litwin is a conservation biologist and former Director of the Clark Science Center at Smith College. He is recently retired from the Jackson Laboratory in Bar Harbor, Maine and Farmington, Connecticut, where he served as the vice president for education, and continues as a visiting scholar. His previous Earth Matters column, about ice in the Arctic and New England, appeared in the Gazette on June 2. Find more on Litwin’s Arctic and Bering Sea Thin Ice research.

One response to “Climate change: How did we get here?”