Cracking the mystery of how birds’ eggs are blue 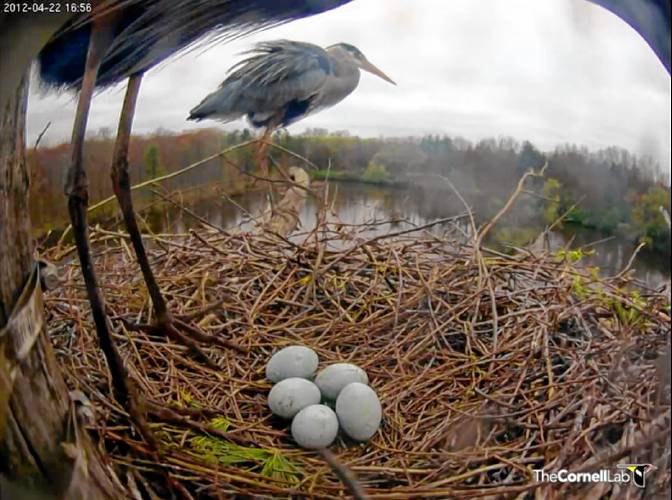 Last November I wrote an article for this column about the color blue in nature: how rare it is, and how difficult it is for nature to even produce it. To my delight, it garnered a lot of interest and curiosity, and even a letter to the editor with a story about why robins’ eggs are blue. I thought this a dazzling — and timely! — example of blue in nature to write about in springtime. 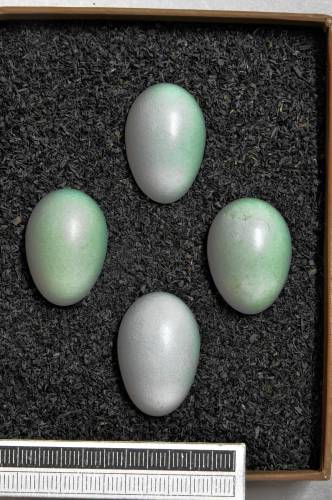 Yes, robins’ eggs are blue, but so are the eggs of many other local birds. Most of the thrushes in this area — the wood thrush, hermit thrush and veery — have blue eggs, as do Eastern bluebirds, European starlings, great blue herons and gray catbirds (although within all of these there can be a great deal of variation).

Still others are blue with brown speckles: scarlet tanager, red-winged blackbird, and house finch eggs, to name just a few. But why?

To understand why so many birds have blue eggs, we need to examine both the source of the color, and possible evolutionary advantages to having blue eggs.

First, the source of the blue in birds’ eggs is the pigment biliverdin, a word that derives from the Latin meaning “green bile.” In the final stages of egg development within the bird’s body, the gelatinous and membrane-coated egg enters the shell gland (uterus), wherein the calcium carbonate shell forms and pigments are deposited throughout it.

Biliverdin is one of just two pigments that are responsible for all birdegg coloration; the other is protoporphyrin, which contributes to brownish-red hues (such as brown speckles). Biliverdin and protoporphyrin combine (or don’t, in the case of all brown, or all white, or all blue eggs), in the shell gland to produce the bird’s signature egg coloration and pattern (if any).

If you’ve never heard of biliverdin, as I hadn’t, perhaps you know bilirubin, the pigment of concern in jaundiced newborn humans. Bilirubin (derived from the Latin meaning “red bile”) is a yellowish compound that is produced during the normal breakdown of red blood cells. Processed by the liver, bilirubin is eventually excreted out of the body.

Because the breakdown of bilirubin is a function that newborns’ bodies don’t do well yet, it is a relatively common occurrence for newborns to have jaundice, or yellow coloration in their skin and eyes. Most cases of jaundice are easily treated with phototherapy, using either sunlight or artificial light from bilirubin lamps.

And here’s where we get back to blue: It is specifically the blue part of the light spectrum (wavelengths of around 450 nanometers) that breaks down bilirubin enough to be excreted, thereby lowering potentially harmful levels of the compound. 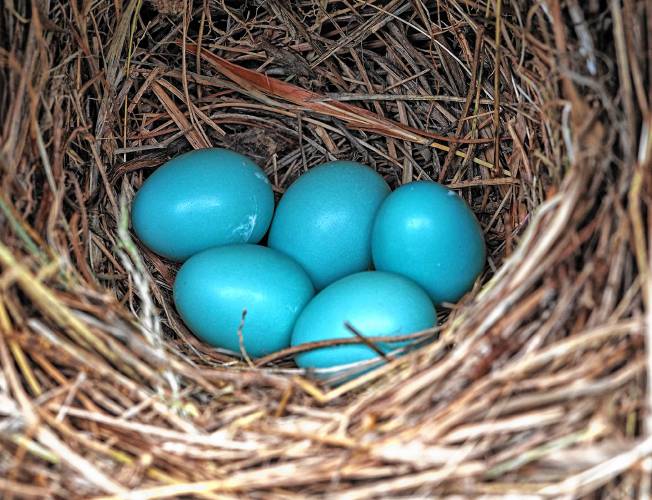 Another instance of biliverdin and bilirubin made visible occurs in the bruising of our skin. When bruises heal, the body breaks down spilled blood cells and their hemoglobin. The iron in hemoglobin is scavenged and reused, usually to form new red blood cells. The rest of the hemoglobin is decomposed into biliverdin — you can see this as your bruise turns bluish green — then converted to bilirubin, which makes your bruise look yellowish. Then, you guessed it, the bilirubin is processed by the liver and excreted out of the body.

Now back to birds’ eggs. What biological purpose, or evolutionary advantage, might egg coloration serve? 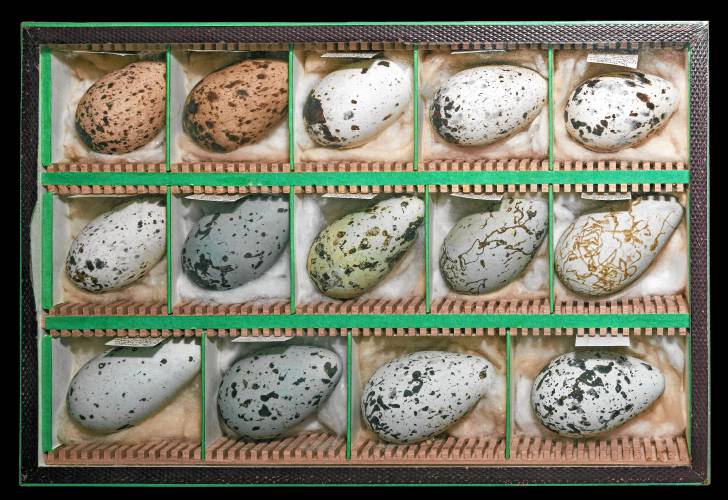 Eggs of the common murre, also known as the common guillemot. DidierDescouens via Wikimedia Commons

Well, brown speckled eggs have a clear purpose: camouflage. Most ground-nesting birds lay eggs that camouflage with the ground so that when the parents need to leave the nest, their eggs are less visible and therefore less susceptible to predation. White eggs seem to be laid primarily by cavity nesters, for whom eggs are always hidden from view, thereby providing no advantage to having pigmented eggs. Yet some open-nesting birds lay white eggs, and some non-ground nesters lay brown speckled eggs, so more is probably going on here.

When it comes to blue, a theory that seems to have a lot of traction is sunblock. The color blue strikes a balance between being dark enough to protect eggs from damaging UV rays, while also being light enough so as to not overheat the eggs, since darker colors absorb more light and therefore, heat. When the parent is off the nest in search of sustenance, blueness might help protect the exposed eggs from the sun’s light.

Eggs of cavity nesters, in constant shade, would not need this protection, perhaps helping to explain why these eggs have no pigmentation. But ground nest eggs would be quite exposed to the sun when the parents left, so why aren’t more of those eggs blue? 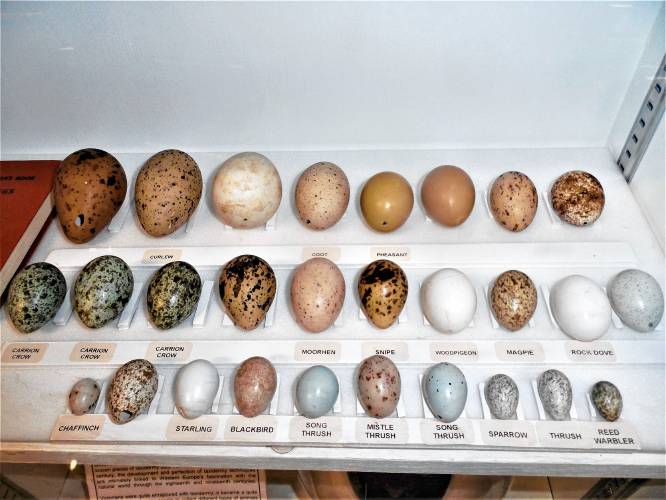 Eggs of various birds in the collection at Trinity College, Dublin, Ireland. Note the light blue eggs of the song thrush in the bottom row and mottled green eggs of the carrion crow in the middle row. Sheila 1988 via Wikimedia Commons

We don’t yet know the answers to these questions. In fact, we don’t know for sure why birds’ eggs are the colors they are. Nevertheless, let’s marvel and wonder at birds’ eggs this spring, and be thankful for blue and all the other colors in nature.

Katie Koerten is an environmental educator at the Hitchcock Center for the Environment.