Creating a new normal in a ‘living’ building 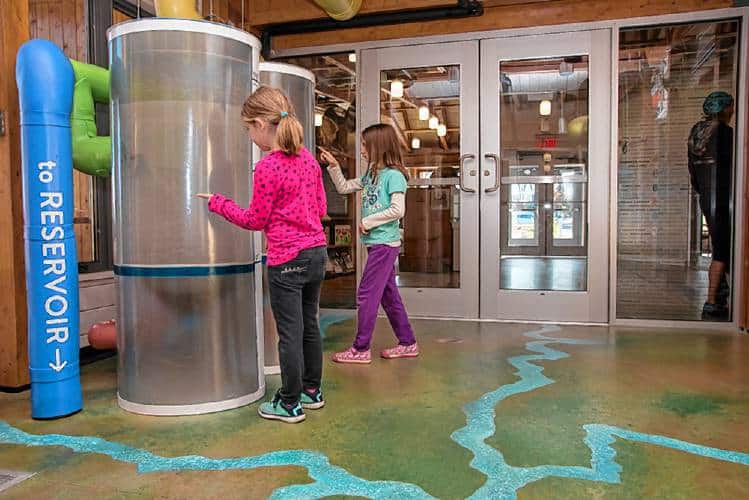 Students learn about the rainwater collection system at the Hitchcock Center for the Environment’s “Living Building.” Jessica Schultz/Hitchcock Center

As an environmental educator at the Hitchcock Center for the Environment, I do most of my work outside. Until our recent move to our new “living” building I didn’t consider that our nature center itself could help me teach about the environment as well.

The Hitchcock Center for the Environment relocated in August 2016 from a charming old former carriage house to a brand-new building constructed at the highest level of sustainable design available. When I wondered how my programs would change at this new site, my focus was on our new outdoor space. What were the trails like? Where would our special places be? What animals would we be able to see, and what plants could I teach about? It didn’t come naturally to think of our building as something I would spend time teaching children about.

Sure, I had been part of the design meetings and contributed my ideas; I understood that we would be generating all of our electricity with solar panels and that instead of using town water or a well, we would be collecting all of our water from rain on the roof. I knew that we would source whatever materials we could as locally as possible, and that toxic substances such as PVC and formaldehyde were off limits.

I believed in my heart that by making these choices those of us at the Hitchcock Center would be leading by example, and truly practicing what we preach. Nevertheless, that all seemed more or less irrelevant to MY programs — I work mostly with elementary-school-age students, and we would mainly be outside together.

But once the public walked through our doors in September, it was clear that my programs were going to be different here. Just by existing, our building asks people to consider the impact of their everyday energy and water use. One of the first things kids notice is the toilets. Our composting toilets use about three ounces of water with every flush, as opposed to the 1¼ gallons or more used by a conventional toilet. The water mixes with soap to create a foam that keeps the toilet bowl clean. (The foam is a novel and endlessly entertaining feature for most kids.) Waste gets composted in basement bins, decomposing as nature intended. When I show kids what three ounces looks like compared to even one gallon of water, their mouths drop open.

The toilets are just one way we educate the public about the preciousness of water. Walking through the halls, you can’t help but notice our first-flush tanks. Located in a passageway that has a mural of the Connecticut River watershed painted on the floor, these huge tanks contain the first 1/16 inch of water that flows off our roof each time it rains. This water never gets used because it contains the most debris from the roof, rather, it eventually flows down the hillside, reentering the water table. After that first 1/16 inch has been collected, the water that follows passes into our reservoir for filtration and consumption.

Spending time in this passageway, called the Ecotone, kids like to find where their house would be in the Connecticut River watershed that’s depicted here and stand on it.

Recently my homeschoolers and I built our own Connecticut River watershed outside in the dirt. We dug recognizable features like the tributaries in our towns, the Easthampton Oxbow and Long Island Sound, where the Connecticut empties into the ocean. We’d done this dozens of times at the old Hitchcock Center, but we had a new awareness of water this time around. At the old site, we had the ability to turn on the hose and let water flow continually down the “river.” The kids created their watershed, building bridges and miniature dwellings, and water flowed and flowed out of the hose.

But at the new center, we can use only the water we capture in rain barrels, and even that we have to conserve for multiple purposes, such as watering the gardens. I was worried that the activity wouldn’t be as much fun with less water. Yet the kids’ eagerness was undiminished as they collected just a few buckets of water from the rain barrel and carried them together to our watershed. When they were satisfied with their creation, they poured the water down and made our riverbed alive with a running river, chasing the water as it flowed past their landmarks. The kids didn’t even notice the difference between the old way and this new, water-saving way — they accepted the bucket system without disappointment. They loved it. Probably without realizing it, they were much closer to where their water comes from, and to the fact that our supply in the rain barrels was finite and precious.

Our dream of creating a new normal for the people who use our building is coming true. For our program participants, composting toilets, solar panels and rainwater collection are no longer new and radical; it’s just what makes sense for our planet. It has been almost 10 months since we moved. I have seen our building make people of all ages pause and reflect on the impacts of our everyday choices, and it gives me hope.

Katie Koerten is an educator at the Hitchcock Center for the Environment.