Does the robin really ‘come to us’ in spring? 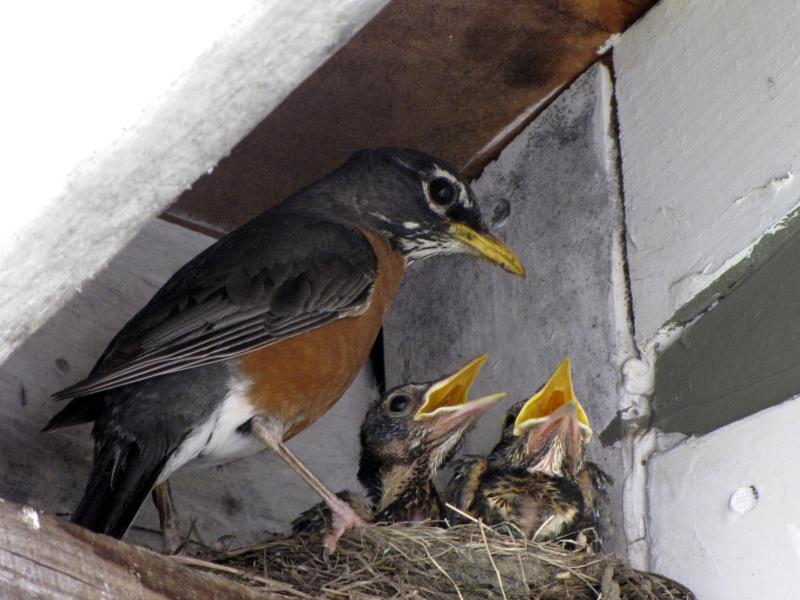 PHOTO BY REBECCA REID A robin with two nestlings.

When does spring begin? There are many answers. Changing day-length offers convenient dates for calendar makers: Days have been lengthening since the solstice in December, and they get longer most rapidly at the equinox in March. Some people split the difference and have spring start at Groundhog Day, roughly midway between solstice and equinox. Plants provide many markers of the new season of growth as well.

From the earliest skunk cabbage blooming through snow to the flow of harvestable sap in the maples to the blooming of each person’s favorite wildflower, many look to the botanical world for signs of spring.

Still others date spring’s start on a bird calendar, beginning perhaps with the black-capped chickadees’ whistling, in naturalist Ernest Thompson Seton’s rendering, Spring soon, spring’s coming,“ starting in December, all the way to the last Eastern wood-pewee arriving from the tropics around the start of June. Among all these, though, probably the best known symbol of the new season is the first American robin in March or April. Amherst’s Emily Dickinson noted a robin interrupting the morning when “March is scarcely on“ and 19th-century Massachusetts poet Lucy Larcom addressed a newly arrived American robin in April, with these words:

Now you have come to us, summer’s in sight.

But does the robin really “come to use_SDRq in March or April? Many American robins winter here in New England. For example, observers on the annual Northampton Christmas Bird Count in December observe, on average, well over a thousand robins per year.

These overwintering robins feed primarily on fruit and gather at night in roosts of dozens to thousands of birds. The number of winter robins seems to have increased over the past century; in the mid-1900s the same Northampton Christmas Bird count averaged a handful to dozens of robins per year rather than the more recent hundreds to thousands. Farther south, robins have long wintered in groups sometimes estimated in the millions, and up to the early 20th century such groups were sometimes harvested for the market.

The phenomenon of northern winter robins is not new. In the 1929 third volume of the classic “Birds of Massachusetts and Other New England States,e_SDRq Edward Howe Forbush, Massachusetts’ state ornithologist, makes fun of newspapers that each year print stories about the “firste_SDRq robin. Many other late 19th- and early 20th-century books on the birds of this region mention winter robins, although the authors of these books reported different experiences regarding how common these birds were.

If American robins have long been known to winter in New England, why do poets and others celebrate the “first” robin as a sign of spring? Ralph Hoffmann provided an answer in his 1904 “Guide to the Birds of New England and Eastern New York,e_SDRq in which he says, “Robins often winter in large flocks; they rarely come into the villages, but live in thick groves or swamps of cedar, on the berries of which they feed.e_SDRq These winter robins may not be apparent to people who do not look for birds in the winter woods or examine closely flocks of birds feeding on ornamental fruit trees.

When the snow melts, lawns open up, and when the ground thaws, earthworms and insect larvae become available. At this time, American robins, some coming a short distance from nearby woods and others coming from much farther south, display the more visible and very familiar worm-hunting behavior that many people associate with this species. These are the robins so often reported as signs of the new season, the “first” robins. Do you and I know better? Maybe, but these are indeed the first robins of the yard, the first to hunt on the ground, the first to behave as many people believe an American robin should behave — the first, in Lucy Larcom’s words, to tell us that “summer’s in sight.e_SDRq So, although the bird is not the first in the region this year, we can still enjoy the changing behavior of the American robin as a symbol of spring.