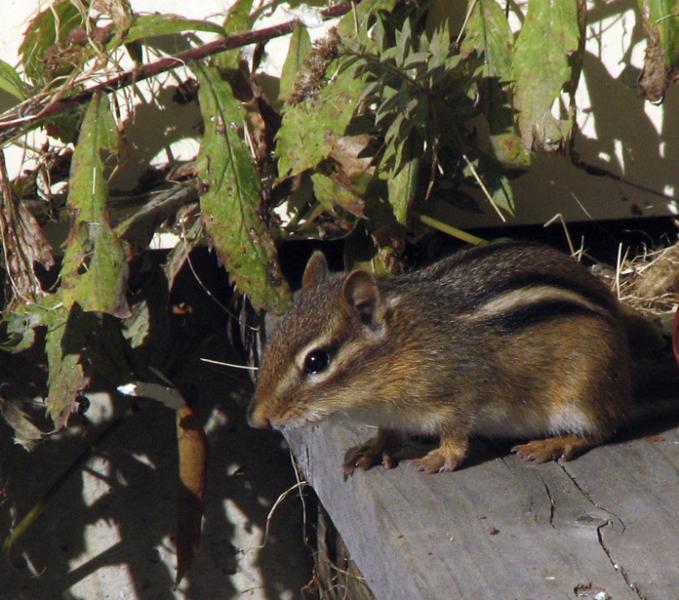 PHOTO COURTESY OF REBECCA REID An Eastern chipmunk: After the author’s parents stopped having outdoor cats, the population of these small mammals in their neighborhood increased dramatically.

I am a cat lover. I have lived with cats for 34 of my 43 years. I try not to think about how many hair balls and litter box clumps I have cleaned up. We moved one of our current cats halfway across the continent, twice, even though she requires daily medication and has repeatedly urinated on furniture. Our cats sleep with us and with our kids.

But we never let them go outside. We keep them inside partly for their own sake, to keep them safe from traffic, dogs and other dangers. But we also do it to protect our local wildlife from our cats.

The U.S. Fish and Wildlife Service recently published an estimate that cats kill at least 365 million birds per year. This was based on studies of the prey that cats bring home, multiplied by the national cat population. It now appears to be a tragic underestimate. A new study by researchers at the University of Georgia attached cameras to house cats to track their outdoor behavior, and found that they brought home less than 25 percent of the animals that they killed, leaving almost half to rot and eating the rest.

There’s more: scholars at the Smithsonian Institution’s Migratory Bird Center recently showed that 40 percent of gray catbirds (ironically) were killed by cats within one week of leaving the nest. And the Lindsay Wildlife Museum, a rehabilitation center in California, found that more than 1,000 birds in a nine-month period — one-quarter of all the birds it received for treatment — were victims of cats; and these were only the survivors that reached rehab.

Birds are not the only wildlife that cats hunt. Cats specialize in killing mammals, and while few of us may object to their catching rats or mice, they often attack innocuous or beneficial mammals like shrews, rabbits and voles. The aforementioned wildlife rehabilitators found that 12 percent of mammals and 11 percent of reptiles brought in were cat victims. In the Georgia study of camera-equipped cats, more than 40 percent of their prey were frogs, snakes and lizards, and 25 percent were mammals. A collaborative study between faculty at the College of William & Mary and the University of Richmond found (among other things) that a single Virginia cat had consumed 27 native species including eight birds, nine reptiles, two amphibians and eight mammals.

Of course, we humans are a key factor as cats’ sponsors and protectors. We give them food and shelter and medical care, and control their comings and goings. We can try to protect wildlife from our cats, or we can make matters worse. For instance, the federal government’s efforts to protect the endangered Key Largo wood rat have been stymied by residents of an adjacent neighborhood. These neighbors spend nearly as much tending the area’s colony of feral cats as the government has budgeted for the wood rat conservation program.

Many cat lovers rationalize their cats’ predation by calling it “natural.”

Unfortunately, domestic cats don’t operate according to “natural” rules. Wild predators starve when their prey supply is depleted. This maintains a balance, allowing the prey population to recover after starvation makes the predators scarce. But domestic cats never starve; they are not killing for food. Indeed, wildlife biologists have found that one sign of a cat kill is that little of the prey has been eaten, often only the head. So no matter how rare the prey become, the cats remain abundant, going home for Friskies or Science Diet between kills, and the prey populations just keep declining with no recovery.

Another study, this one from the University of California at Santa Cruz, demonstrates the risks posed by outdoor life not just to wildlife but to cats themselves. Researchers found that bird diversity was higher where coyotes were present. In habitat without coyotes, certain bird species—especially those that nest on the ground—were driven locally extinct. With coyotes around, owners are more careful to keep cats inside, cats of less wary owners are killed, and more bird species survive.

We adopted one of our cats — the one that has moved twice with us — from a shelter. The terms on the adoption contract included a promise to keep her indoors. This is a smart shelter.

When I was growing up, Eastern chipmunks were an uncommon sight around my parents’ house. After our second cat, my parents stopped owning outdoor cats. The chipmunk population rebounded dramatically; they are now the most common mammal in the neighborhood.

Some experiments are worth repeating.

Joshua Rose is a naturalist who lives in Amherst next to the Amethyst Brook Conservation Area. He is a Hitchcock Center member and a board member of the Hampshire Bird Club; he regularly leads programs for local nature-oriented groups. Before moving to Massachusetts he was program director of the World Birding Center in south Texas. He also is a contributing editor of BugGuide.