I’m offended. I hereby register my formal and public complaint regarding using “drain the swamp,” to refer to removing excess, unusable or undesirable from politics in general and Washington D.C. in particular. While the latter may be a worthy activity — now more than ever, for the good of the swamp and clean air and water for every other living creature — in our physical, natural world, please don’t drain that swamp! Your life might depend on it! Here’s why. 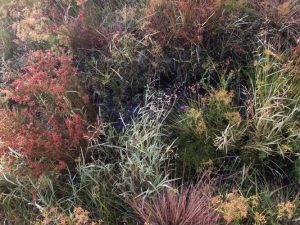 Diverse native wetland plants are already returning on their own to this retired cranberry farm and soon-to-be wetland at Foothills Preserve in Plymouth, MA. Supplied photo/Christine Hatch

What’s in a name? Documented as early as 1903, the metaphor equating wholesale draining of a swamp to exterminate potentially malaria-carrying mosquitoes with the promise to remove undesirable elements from government is recently re-popularized. Yet it continues to spread the misconception that swamps (and insects for that matter) are inherently undesirable. “Swamp” itself doesn’t help, since this vague term is defined as an area of low-lying, uncultivated ground where water collects; with synonyms including marsh, bog, quagmire, mire, morass, fen, quag and sump. Recently, the more precise term “wetland” is used to describe wet places on our landscape, but these lands remain contentious.

Beneficial Use. Humans have often viewed their role in nature to “tame” or “dominate” it. Development of agrarian societies led to ownership, assertions of land rights, and regulations. In the U.S. today, the federal government regulates lands and waters. Wetlands are difficult to regulate precisely because they are neither: too wet most of the time to be “land,” and mostly not suitable for cultivation; and too muddy, vegetated and intermittently submerged to be navigable waterways.

What do we value? The definition of “swamp” includes “uncultivated ground,” implying that worth can only be assessed on the basis of agricultural production. In recent history, humans have valued land because we could produce something from it. Thus, we’ve long sought to transform all lands to fit that narrow definition. Engineers drained wet, marginal farmlands quickly and efficiently, building networks of ditches and drains that moved water off “to keep wetlands from flooding.” This approach worked well enough during relatively dry, predictable weather, but was a significant gamble — and ultimately a fallacy during wet weather. When high-intensity or large-magnitude storms come, low-lying areas are meant to flood. They capture and pool a large volume of floodwater, allow it to slowly percolate into their organic-rich soils, filtering out excess sediment, nutrients and contaminants. Even more slowly, flood waters are released back to rivers and streams. But when drains and ditch networks short-circuit these natural catch-basins, the opposite occurs. An intense storm will produce an even more intense flood wave and doubly fast — an effect that compounds and multiplies, concentrating flows with each input. Which do we value more: arable lands or flood protection and clean water? A swamp can save you from a flood. 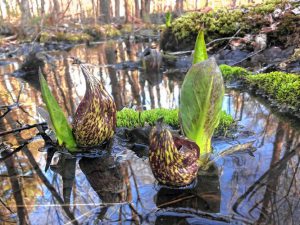 A swamp can also save you from climate change. Water pooled in the wetland makes it hard to walk there, but will save structures at higher elevations from floodwaters. Excess CO2 in the atmosphere is changing our climate and threatening life as we know it. Humble wetlands are part of the solution: As plants fall into perpetually pooled water, they decompose anaerobically (without oxygen), so all of the carbon contained within the plants from carbon dioxide they ingested over their lifetime gets stored away and compressed into the ground like a time capsule — and a carbon sink! These waters, perpetually sitting on the land surface, interact with the air and the ground, breaking down chemical compounds into nutrients, filtering the air, filtering the water, and quietly storing the rest in fertile, black, anoxic (low- or no-oxygen), organic muck deep in the ground. This process takes time — a century or more for these functions to develop — so it’s well worth holding on to as many of these lands as we can.

Next spring, at first thaw, you will first smell earth. Look down deep in the wettest of the bottom lands and watch the miracle of life burst forth. One of spring’s first plants is skunk cabbage. Purple leaf flames curl out of the ground like twisted claws, variegated with stripes and blotches of green. The stout, pointed flowers, buffered by a blanket of water, seem to burst out of nowhere. These living sculptures appear as one, maybe three pointy curling pyramids, pushing up the first life out of winter. They grow taller, and asparagus-like, until, within a couple of weeks, they’ve deployed a broad, rounded leafy canopy over the perpetually wet ground. Before any other green in the woods besides the evergreens, the lush understory of skunk cabbage maps out the wetlands that are the foundation of life in forests and meadows every spring.

Yes, wetlands are muddy, and yes, they foster mosquitoes and countless other insects. But they are the very base of terrestrial and aquatic food chains, the foundation upon which so much soil fertility and biodiversity depends. If you value fish and birds, protection from floods, clean air and clean water — give a wetland another look, and thank those forgotten deep, dark hollows for all they do for you.

Dr. Christine Hatch is Research-Extension Liaison for the Center for Agriculture, Food and the Environment, and Extension Associate Professor of Water Resources and Climate Change in the Department of Geosciences at University of Massachusetts Amherst. She is currently working on a project to restore an old cranberry farm back to a freshwater wetland in Plymouth, Mass.