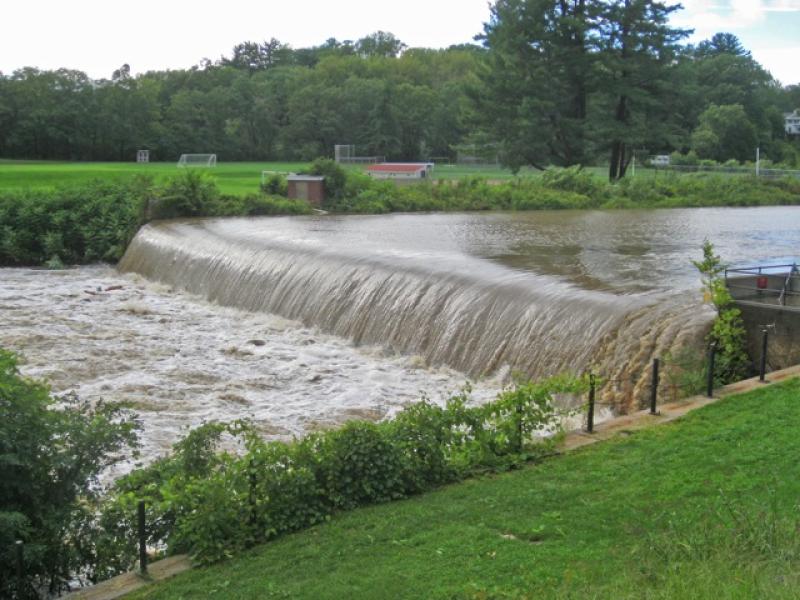 Swollen with rain from Hurricane Irene in 2011, the Mill River pours over the Paradise Pond dam at Smith College. The new interpretive trail starts here. PHOTO BY JOHN SINTON

Northampton is a walkable city, with shops, theater and a plethora of wonderful restaurants. What’s a bit less obvious to those who stroll Main Street is that an equally wonderful river runs through the town.

The Mill River courses through 18 miles from its headwaters in Goshen to its confluence with the mighty Connecticut River via Hurlburt’s Pond, west of the Oxbow. Many walking trails traverse the riverbanks at Mass Audubon’s Arcadia Wildlife Sanctuary in Easthampton, and in neighborhoods west of Smith College.

But a new trail, right in downtown Northampton, eloquently traces the 350-year history of this waterway since Europeans first arrived. It has been meticulously researched and laid out by historical geographer John Sinton of the Mill River Greenway Initiative and several talented Smith College students, along with help from the college’s faculty and staff at Forbes Library in Northampton and Historic Northampton.

The trail begins at the Smith College Boathouse on College Lane in the middle of campus and continues for an easy 1¼ miles to Conz Street. It features nine stops along the way, at which you can view and learn about old mill sites, Native American activities along the river, devastating floods and our best efforts to control them, meadows used for livestock fodder in the 17th and 18th centuries and much more.

The Mill River is a surprisingly powerful little river that has the capacity to become rowdy when heavy rains fall. The river drops steeply from an elevation of 1,440 feet at its headwaters, carving a deep channel through the Hilltowns of Goshen, Conway and Williamsburg. At Leeds, the topography gradually flattens out, allowing the river to slow its pace and deposit its sediments.

The high-energy Mill River has sometimes erupted into massive deluges. Historical records list 11 floods in the 18th century, 13 in the 19th century, and 11 in the early 20th century. The granddaddy of floods occurred one otherwise placid early May morning in 1874, when a poorly constructed earthen dam in Williamsburg suddenly gave way, releasing 16 million gallons of water in a torrent that killed 139 people, rendered over 700 others homeless and washed away four towns: Williamsburg, Skinnerville, Haydenville and Leeds. Seeing the Mill River as home and a useful resource for industry, residents have doggedly rebuilt following each disaster.

Back-to-back floods in 1936 and 1938 (the latter following on the Great Hurricane) inundated downtown Northampton and led the Army Corps of Engineers to divert the river away from the city center. An enormous dike on West Street now redirects the river west to the Oxbow, where it eventually flows into the Manhan River and joins the Connecticut; a nearly mile-long dike near Pomeroy Terrace also keeps the river at bay.

This re-routing has orphaned a portion of the original Mill River floodplain. In places below Pulaski Park, you can see enormous sycamore trees, remnants of the floodplain forest, now standing high and dry. A slow but steady effort is under way to restore, bring to light and celebrate the historic Mill River corridor through interpretive trails.

When it’s behaving itself, the Mill River has provided abundant, controlled hydropower that fueled the development of factories that produced everything from silk stockings to silverware; this manufacturing boom brought prosperity to Northampton. The mills give this river, and at least five others scattered across Massachusetts, their names.

However, some of those industries, as well as the practice of dumping and burning garbage by the riverside, generated horrendous water pollution. Even into the mid-20th century, plumes of smoke from incinerated trash could be seen and smelled from Smith College, and the burnt tailings, dyes and industrial chemicals were summarily discarded into the river. Such practices were finally regulated or ceased when the Clean Water Act was put into force in 1972. Since then, the river has gradually recovered, and the latest water quality sampling in June 2013 by the Connecticut River Watershed Council declared the river safe for boating and swimming. Bacteria and pollutant levels can still spike during floods but, overall, the health of the river is a testament to its resilience.

So pick up a self-guided river-walk brochure at the Greater Northampton Chamber of Commerce, take a walk beyond the shops and explore this downtown gem for yourself!

Elizabeth Farnsworth reveres rivers, even dry or flashy ones, and is the co-author, with John and Wendy Sinton, of “The Connecticut River Boating Guide: Source to Sea,” published by the Connecticut River Watershed Council. More information is available on the Mill River Greenway Initiative and the new Historic Mill River Walk.

One response to “Downtown Northampton’s 350 years of river history”