Ducking for the elusive, but fierce goose hawk 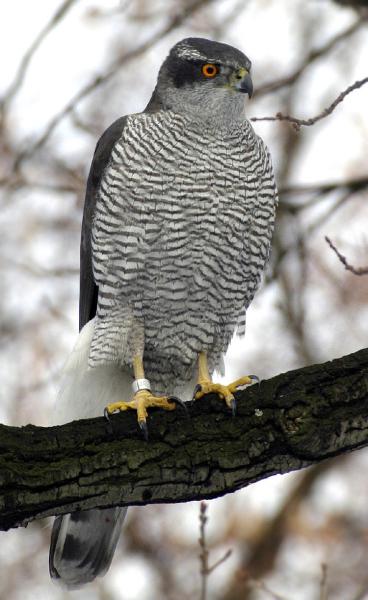 The wilds of western Massachusetts are not very dangerous.

Many threats — mosquitoes and ticks, poison ivy and nettles — are relatively familiar to most people who walk the woods. Poisonous snakes are rare here, and an attack by a large mammal would be extremely unusual.

There are birds, such as any member of the heron family, that I would be very careful about handling but that pose no threat in the wild. One local bird species, though, makes me nervous.

If, as you walk through the spring or summer woods, you hear a harsh insistent “kek, Kek, KEK, KEK, KEK, KEK . . . ,” I suggest that you drop to the ground, look around, and back carefully away. A northern goshawk defending a nest is nothing to take lightly.

A goshawk (the name originally means goose hawk, and is sometimes shortened to “gos”) is powerful and highly maneuverable. Its short wings, which reduce the chances of hitting trees, and its proportionately long tail, which acts as a rudder, enable fast flight with rapid turns as the bird hunts through the forest. A female, the larger sex, typically weighs well over two pounds, and can weigh as much as three pounds.

Goshawk prey include a wide variety of birds and some small mammals, with rabbits, hares and grouse up to twice the weight of the hawk being commonly taken.

Poet Robert Burns described movement “swift as the gos drives on the wheeling hare.” How fast is that? Goshawks diving on prey have been timed by radar at about 60 miles per hour, and high-speed photography has recorded a goshawk’s talons hitting prey at about 50 miles per hour. A goshawk near its nest has a short fuse regarding any animal, including a human, that it perceives as a potential predator on its eggs or nestlings.

With a combination of a sharp defensive temper, turn-on-a-dime maneuverability, and a couple of pounds of predator behind sharp talons moving at highway speed, it’s not surprising that goshawks have drawn blood from humans who have approached their nests. Fortunately, an angry goshawk usually calls before diving on an intruder. That call is a warning indeed.

Some years ago, while walking through the woods, I heard it and looked up to see a big bird bearing rapidly down on me. I hit the deck and lay flat, as the goshawk repeatedly buzzed me. I didn’t stay to look for the nest, but grabbed a stick and waved it over my head to discourage close approach of the upset bird as I carefully retraced my steps, keeping the hawk in view until I was beyond her defensive zone.

Many people have never seen a goshawk, and I am sometimes asked how to find one.

Goshawks are scarce at best, with population densities rarely reaching as much as one nesting pair per three square miles in optimal habitat in the western United States. Populations even more sparse in the East. Combine that low population density with a bird that is usually quiet and usually in forested habitat, and goshawks are seldom seen. Unfortunately, too, sightings are often brief, and identification can be a challenge, especially with the much more common Cooper’s hawk (and other raptors) looking confusingly like a goshawk.

An adult goshawk is strikingly gray, colored unlike any other local hawk except the male northern harrier, which is differently shaped. It can usually be readily identified — if you can see it well. Unfortunately, a glimpse of a hawk in flight often doesn’t allow one to note all relevant details. Careful attention to multiple details such as the shape of the pale line over the eye, whether dark streaking extends to beneath the base of the tail, the pattern of tail banding, and the shape of the end of the tail can help reduce uncertainty.

Consulting good field guides (especially guides to hawk identification) can help. Don’t be discouraged; many an expert has been unable to identify some hawks with certainty based on field sightings.

There is no sure way to find a goshawk in the wild. Spending many hours on a mountaintop watching the southbound hawk migration in October and November eventually results in goshawk sightings, but only a handful are seen from any one location in a given year.

Mountaintops in the spring provide vantage points to scan for courtship flights in which pairs of goshawks fly together above the forest canopy.

People who know of goshawk nests generally do not share the locations out of concern both for the safety of observers and for the safety of the young birds, which are sometimes taken by the nestful by people collecting them illegally for falconry.

Of course, if you wander through the woods over the next couple of months you might be lucky enough to stray near a nest, hear “kek, Kek, KEK, KEK, KEK, KEK . . . ,” see a large gray bird with fiery eyes bearing down on you — and live to tell the tale.