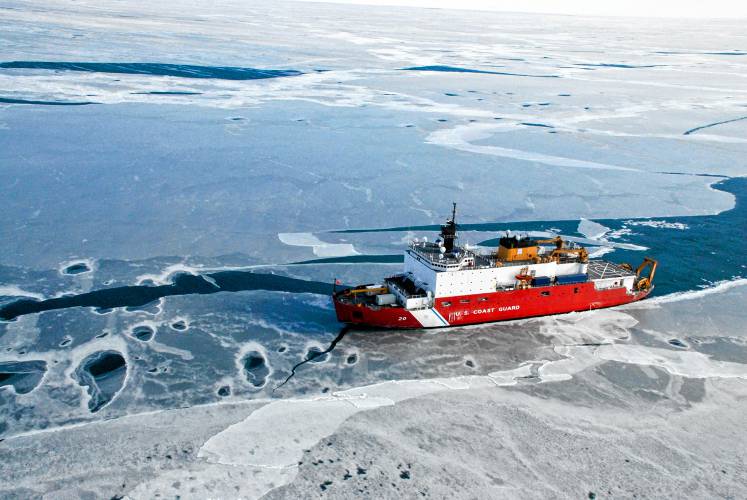 Editor’s note: This is the first of a two-part series. Part 2 will be published on December 15.

Ten years ago, I was part of a team of international scientists lined up along the railing of the 420-foot U.S. Coast Guard icebreaker Healy as we prepared to leave the Dutch Harbor wharf. We had made our way to this Aleutian Island fishing port the afternoon before, and this morning was the start of a busy day. We made many trips back and forth from dock to ship, moving instruments and gear into the extensive shipboard lab spaces before heading out to sea.

Settled in our cabins by later afternoon, the scientific teams navigated up unfamiliar companionways from below-deck cabins to the upper deck — the Healy was about to leave port. It’s no simple matter moving a ship this size away from a massive dock. A burly ocean-going tugboat nudged the Healy’s stern away from the dock in synchrony with the Healy’s bow thrusters to gently glide the ship into open water. With the Healy cleared from land and under power, a month-long scientific expedition into the Bering Sea was underway. The goal of the National Science Foundation-funded voyage was to better understand the Bering Sea ecosystem and the critical role that sea ice played in the health of the Bering Sea.

There was an air of urgency to the mission as projections of climate change and melting sea ice came into focus. Now, in the 10th anniversary year of the voyage and the International Polar Year, we see these concerns as prophetic and confirmed by the release of the September report by the UN’s International Panel on Climate Change.

The Arctic, including the Bering Sea, is warming twice as fast as the rest of the planet: In winter 2018, temperatures spiked and ice melted at record levels. In February, when ice coverage would normally have been at a maximum, the National Snow and Ice Data Center reported ice coverage was at historic lows, particularly in the Bering Sea — where sea ice coverage is 60 percent below the 1981-2010 average. The Alaska Weather Service reported that in the Bering Sea a Minnesota-size area of sea ice disappeared at the end of February. The 2008 Healy scientists collected sea ice data in locations that would have no ice or greatly diminished ice in March 2018.

The Healy spent the night navigating north toward St. Lawrence Island at the Bering Strait’s entrance. By noon the next day we were off the Pribilof Islands and in “brash ice,” carpet-size pieces barely visible through the horizontally blowing snow. With the wind blowing at 42 mph and temperature at 16F, we were happy to watch our progress from the comfort of the bridge. Brash ice gradually gave way to “floe ice,” pieces the size of half a basketball court. There was still plenty of open water around these larger pieces, so we were not yet “ice breaking,” but rather pushing the floes out of the way of the Healy’s path. This took some getting used to — with each contact there would be a jolt, thud and tremor through the ship and a loud scrapping noise as the floes slid along the side of the ship. I had complete faith in this tested, veteran ship and crew, but with particularly big jolts, I could not help the thought, “Is this a good idea?”

By later afternoon we were “in the ice” with little open water. Although the sky was overcast with no sun visible, people were putting on sunglasses. With solid, snow-covered ice as far as the eye could see, and no discernible break on the horizon where the ice ended and sky began, it was very bright. The albedo effect was in full force as most of the light hitting this vast, white, snow-covered surface was reflected back into the atmosphere, rather than being absorbed by, and warming, the darker ocean below.

The Healy was now icebreaking, capable of breaking ice 4½ feet thick with just its forward motion. This worked until we encountered an area of ridges, where sheets of ice piled up on each other creating much thicker ice. We quickly came to understand the “back and ram” maneuver. When encountering ice up to 8 feet thick, which stopped forward motion, the ship backed up a distance, then powered forward, building up speed. The ship literally rammed the obstructing ice, riding up over it with the weight of the ship crushing downward and pushing forward — lightning bolt-shaped cracks darted out from the blow of the Healy’s bow. Then the ship backed up and did it all again. In one back and ram event I made my way below deck to a storage room whose walls adjoined the icebreaking bow. I’ll never forget the all-consuming cacophony of crashing, booming, gnashing and scraping sounds that jarred my senses.

Icebreaking continued throughout the night. A mesmerizing cone of light off the bow created by two powerful lights sharply delineated the Healy’s path from the vast darkness of the frozen ocean surrounding us. Calling it a day, I returned to my cabin and took comfort in a warm sleeping bag. Tomorrow we would be on station just south of St. Lawrence Island where the research sampling would begin in earnest. I drifted off to sleep with the sound of ice banging, rattling and scraping along the Healy’s hull.

Tom Litwin is a conservation biologist and former Director of the Clark Science Center at Smith College. He is recently retired from the Jackson Laboratory in Bar Harbor, Maine and Farmington, CT, where he served as the Vice President for Education, and continues as a Visiting Scholar. More on Tom’s Arctic and Bering Sea Thin Ice research can be found at pbs.org.