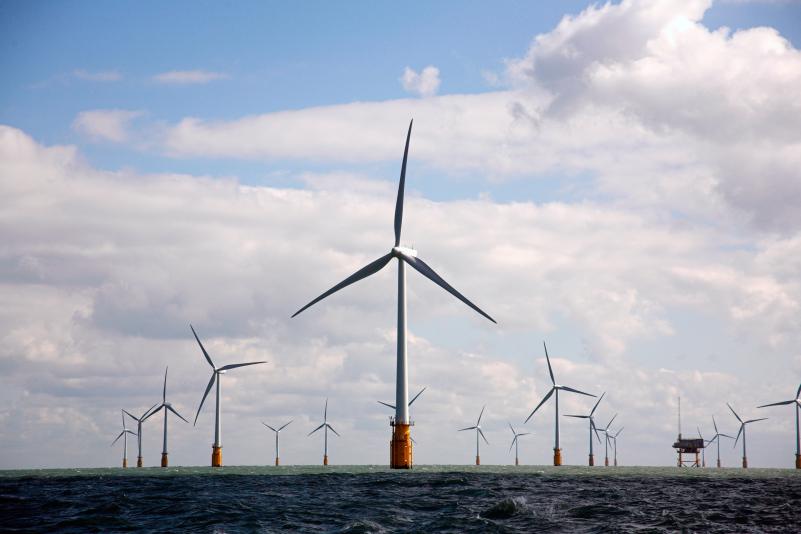 Vattenfall, via Creative Commons.” “Wind turbines at the Thanet wind farm off the coast of England, producing energy for about 200,000 households. A study of Massachusetts’ renewable energy capacity says that we could produce more than half our energy needs from offshore wind facilities.

As this goes to press, the world awaits the results of yet another climate change conference. Hopes are high that we’ll see some movement toward reducing greenhouse gas emissions rather than the usual stalemate. But climate change is already upon us.

The critical question now is whether we can prevent global catastrophe. To reach that goal, climate scientists and advocates are coalescing around two principles: first, that most of the known fossil-fuel reserves in the world should stay in the ground, and second, that the world must stop using all fossil fuels by 2050 — if not sooner — if we are to have any chance of keeping the Earth from warming more than two degrees Celsius (3.6 degrees Fahrenheit).

I’ve been encouraged recently by studies suggesting that achieving a fossil-fuel-free world within that time frame is possible using existing technologies; we don’t have to wait for some dramatic breakthrough. What we do need is leadership and commitment, and this is where Massachusetts could be one of those leaders by showing how to get the job done.

In 2009, Mark Jacobson, a Stanford University engineering professor, and his colleagues published a global analysis that demonstrated the feasibility of a worldwide shift to renewable, zero-emission energy sources. The study focused on wind, water and solar for producing electricity to heat and cool buildings, run machinery and power transport in all its forms. Wind included both land-based and offshore wind turbines; water included hydroelectric facilities, electricity produced through wave and tidal action, and geothermal hot water and steam for both heating and electrical generation; and solar included rooftop photovoltaic (PV) systems, large-scale PV “farms” and concentrated solar power using focused sunlight to heat fluids for electricity generation.

Following up on this global study, Jacobson cofounded an organization called The Solutions Project, which has performed a similar analysis for each state in this country, outlining a path to a fossil-fuel-free United States. For some, this might seem strictly hypothetical, but given the leadership Massachusetts has shown up to now, there is no reason to doubt that we can eliminate fossil fuels from the state’s energy economy.

Like the rest of New England, Massachusetts has no significant oil or gas deposits, nor are we graced with geothermal resources. But we do have ample sunlight, wind and water on which to base a new zero-emission economy. The Solutions Project breaks down our state’s strategy as follows: wind — 55 percent from offshore facilities, 13 percent from onshore wind farms; solar — 23 percent from commercial PV plants, and 7 percent from residential and commercial/government rooftop PV. The remaining 2 percent would come from wave devices, tidal turbines and low-impact hydroelectric generators.

This scenario envisions a transition from a fossil-fuel-driven economy to one centered on electricity from these renewable sources. It also includes major improvements in energy efficiency for our buildings, vehicles and machinery.

The Solutions Project estimates that this transition will result in a 40 percent reduction in energy demand. The group also projects that more than 100,000 permanent jobs will be created with this change-over. Financially, Massachusetts would stand to see substantial savings from reduced health costs that come with cleaner air and water, and lower energy costs compared to fossil fuels.

Getting there won’t be easy, but not because of technological barriers.

For more than a century, we have built an economy deeply dependent on oil, gas and coal, and those industries that have profited most from that economy are the most reluctant to change.

For example, many of the state’s electric utilities are against raising the cap on net metering for industrial solar installations. (Net metering allows solar power producers to get credit for electricity that their panels send out to the grid. The caps at issue are for large-scale producers, not homeowners. The legislative session ended without resolving this key issue.)

That limit is a significant constraint on further growth of solar generation in Massachusetts. These companies need a new business model that allows them to embrace rather than resist alternatives to fossil fuels, leading the way instead of standing in the way.

Speaking at the University of Massachusetts, Amherst commencement in 2014, Governor Deval Patrick embraced the idea of a transition away from fossil fuels. “The time has come” he said, “to set a new standard that ensures that, at every point in time, at every moment, we are getting the cleanest energy possible. It means energy efficiency first. It means zero-emission electricity next — solar, wind, and hydro…. We should set (this standard) for our state that puts us on a path to reduce our emissions by fully 80 percent by mid-century. It’s not the ideal today, but it will get us there tomorrow. It’s how we move from good to better to best. What’s the best? The best is a future free of fossil fuels.”

We now have a new administration on Beacon Hill, and Gov. Charlie Baker may have different priorities from his predecessor, but the need for climate action and for our Commonwealth’s well-being will prevail in the end. The vision of what’s possible is clear. Now what we need is the political will to achieve it.

Michael Dover is a retired environmental scientist and a former board member at the Hitchcock Center for the Environment. To read more about Mark Jacobson’s work, visit http://tinyurl.com/earthmatters-4 (Scientific American, 2009) and http://tinyurl.com/earthmatters-5 (National Geographic, 2015. To see the Solutions Project’s state-by-state projections of a fossil-fuel-free future, visit http://thesolutionsproject.org/.