Far from the sea, gulls in our midst 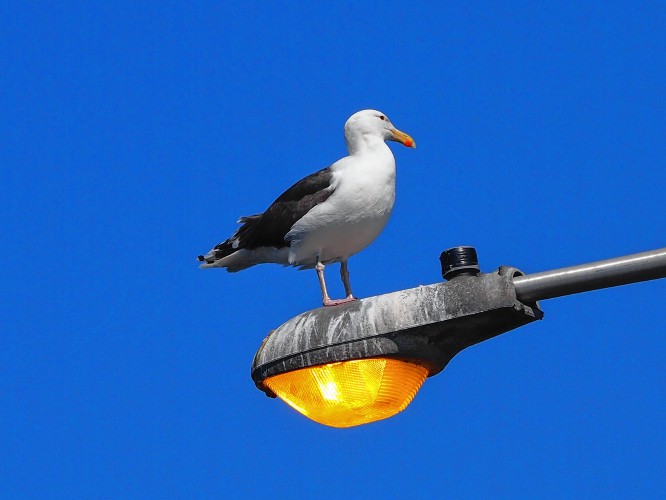 A great black-backed gull perched on street light is a common sight on bridges crossing the Connecticut River.

By mid-winter many of the smaller, more colorful birds have gone south for the season, and now is a good time to pay attention to gulls.

With their black, white and gray plumage, these engaging birds are a match to the winter landscape. As ecological generalists, gleaning gulls can make a living on our leavings as they pick over the corn left in farm fields, fries in fast-food parking lots and discarded bits of food in and around rivers.

No gulls breed here in western Massachusetts. A few non-breeding individuals are here year-round, but it is in the winter that we see the greatest variety, when more northerly breeding gulls disperse to wherever they find food. Some gulls spend most of their lives on or near the ocean, earning the name disliked by birdwatchers: “seagulls.”

Others, though, spend little or no time near salt water. A gull that summers on prairies and winters on parking lots may never glimpse any of the seven seas in its decade or more of life.

Some people find it difficult to identify the various species of gulls. Many gull species diverged from each other relatively recently in geologic time and thus have not evolved much in appearance. Gull species occasionally interbreed with each other. These situations result in birds that can be difficult even for experts to identify.

Fortunately, the three species of gulls that occur commonly in the Connecticut River Valley are relatively easy to tell apart with a little experience. When they stand next to each other, distinctions in size and shape are apparent among the large and bulky great black-backed gull, the relatively small ring-billed gull and the intermediate-sized herring gull.

Observing feather pattern within each species allows us to know the age of a gull. Ring-billed gulls take a bit over two years to gain their adult appearance, and the two larger species take somewhat more than three years. The youngest birds of all three species have a lot of brown mottling. The adult birds are largely white and with gray backs (or black for the aptly named great black-backed gull), with black wingtips interrupted by white spots. With a good field guide and careful practice you can assign most individuals to an age category.

Once these gulls reach adulthood the only changes in appearance are the annual acquisition of dark mottling around the head in winter, obvious on a herring gull or ring-billed gull, but very slight on a great black-backed gull. This mottling can give a herring gull the appearance of one of the hooded species of gull, such as the laughing gull that is common on the Massachusetts coast in the summer, but which are seldom found here in western Massachusetts.

Birdwatchers keep an eye out for less common gulls here, including two northern species seen in small numbers each winter and distinguished by their white wing-tips — the delicate Iceland gull (a bit smaller and slenderer than the herring gull) and the big glaucous gull (similar in size to the great black-backed gull). Over a dozen species of gulls have been seen in western Massachusetts over the years, but most of them are uncommon or quite rare here.

Although our gulls are generalist foragers, the species have slightly different habitat preferences. A gull grabbing leftovers at a fast-food restaurant is likely to be a ring-billed gull, whereas the larger and dominant great black-backed gull is more likely to be found picking over prime items at a landfill.

As with any wild animal, gulls reward observers who pay close attention to their behavior. If you watch their feeding, flight and fights (or, at other times of year in other locations, their breeding) you will be in good company. Crossing the East River on the Brooklyn Ferry in winter, poet Walt Whitman “Watched the Twelfth-month sea-gulls . . . floating with motionless wings.” Nobel Prize-winning biologist Niko Tinbergen helped to found the science of ethology (the study of animal behavior in an ecological and evolutionary context) with his classic observations of gull behavior. Tinbergen summarized his gull studies in his very accessible book, “The Herring Gull’s World,” and his children’s book, “Kleew: The Story of a Gull.”

So, to enjoy birds there’s no need to wait for the colorful and tuneful warblers, orioles and tanagers of May. Gulls provide opportunities to sharpen identification skills, enjoy graceful flight and admire the resourcefulness of animals adapted to civilization.