By KATIE KOERTEN For the Gazette

Every now and then I experience something that gives me so much hope for what humans can do to address climate change, pollution and environmental degradation. One such thing was a textile exhibit at the Hitchcock Center for the Environment last fall called “Fibershed: From Farm to Fashion Within Fifty Miles.”

In the words of a Fibershed community centered in Nashville, Tennessee, the term refers to a “network of farmers, designers, mills, makers and shops working to strengthen the local textile economy.” The Fibershed movement seeks to demonstrate ways to reduce and eventually reverse the climate impacts of textile and clothing manufacture, distribution, usage and disposal.

The exhibit at the Hitchcock Center combined art with education, mapping out a solution for bioregional fiber and clothing production. When I first walked into the room last November and beheld the 20 or so woolen garments, shoes and accessories on the walls and tables, my heart sang out, “Yes!” though I wasn’t even sure why, at first.

As I read the placards on the walls and learned more about the process, that feeling of inspiration surged.

All around the room were unique and beautiful garments — jackets, dresses, wraps, pants, scarves, hats and boots — created out of the same woolen fabric. Though a few of the pieces had a bit of color, thanks to plant-based dyes or upcycled wool from elsewhere, most everything was made from undyed wool in shades of gray. I was looking at a celebration of wool, crafted by gifted artisans in the Pioneer Valley. 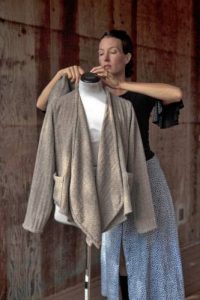 The pieces themselves were cool enough on their own, but what was really inspiring about this exhibit was the story behind it. The entire process, from sheep to garment, happened within a 50-mile radius. The sheep and their farmers live in Montague. The sheeps’ wool was spun into yarn in Putney. The yarn was woven into flat fabric in Shelburne Falls. The artisans who designed and made the pieces live and work in or near the Pioneer Valley.

Why does this matter? Well, imagine how much smaller the carbon footprint is for these clothes than say, your average cardigan from Old Navy. Imagine keeping the money you spend on clothing in your local economy rather than giving it to multinational corporations. Imagine it being perfectly possible to meet every person who had a part in the making of your garment, from farmer to spinner to weaver to stitcher! Just imagine how much healthier our textile production systems could be for the planet if this was the norm for our clothing.  The Fibershed project imagines all this and more. Originating in northern California with farmer, weaver and author Rebecca Burgess, Fibershed “envision[s] the emergence of an international system of regional textile communities that enliven connection and ownership of ‘soil-to-soil’ textile processes.”

It began back in 2009, when it dawned on Burgess that despite being a fiber artist and natural dyer, her closet was full of fossil carbon-derived clothing. She wanted to begin to “walk her talk” and use her skills as a fiber artist to clothe herself in more sustainable fibers. So she challenged herself to build a prototype wardrobe using only garments sourced from the area in which she lived, and wear them exclusively for one year. 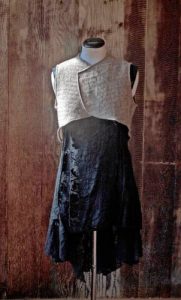 This cocoon is a graduated vest designed to keep the core warm, made from 100% Fibershed wool and cotton thread. Travis Widrick Photography

This 12-month experiment eventually grew into what Fibershed is today: a nonprofit that educates and connects farmers with spinning and weaving mills to localize clothing production.The natural fibers manufactured by the Fibershed network can easily be recycled or composted at the end of their lifespans. So not only does the project aspire to keep clothing production local, it aims to complete the carbon cycle from soil to soil. Much of today’s clothing industry produces petroleum-based fibers, such as acrylic, nylon and polyester, which end up in landfills and don’t readily break down.

In 2017, a staggering 11.2 million tons of textiles ended up in landfills in the U.S., according to the EPA. Fibershed imagines a renewable system in which a garment can be composted at the end of its wearable life, thereby nourishing the soil that will nourish plants and animals that can then produce new, sustainable fibers.

The fiber artists responsible for the exhibit in western Massachusetts received a microgrant from Fibershed California. With this funding, the local Fibershed group embarked on what the artists describe as a two-part mission: first, to navigate new territory to map the process and potential for bioregional cloth production; and second, to inspire, educate and generate interest for locally sourced sustainable materials.

I acknowledge that it will probably not be attainable for me and many others to have closets consisting entirely of bioregionally produced clothing. However, the Fibershed concept opens a window into the possibility of more sustainable local and regional production, use and recycling of textiles. Ambitious and imaginative projects like this one remind me of what is possible when we strive to make the healthiest choices for the planet.

Katie Koerten is an environmental educator at the Hitchcock Center for the Environment. Read more about the Fibershed project. For more information about Fibershed in western Massachusetts, email WesternMassFibershed@gmail.com.