Following the footsteps of great naturalists in Northampton

I spent an absorbing three hours in some woods, fields and wetlands at Hospital Hill (now called Village Hill) in Northampton earlier this year. Take it from an old codger — if you’re ever offered the chance to accompany three skilled professional naturalists on a species hunt, jump at it! You’ll see whole worlds in clumps of weeds and grand surprises along the trails. 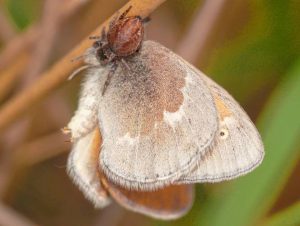 On our walk, we spotted a Jumping spider eating a common ringlet moth. Charley Eiseman

The occasion: Hitchcock Center for the Environment’s annual Biothon, during which teams of nature enthusiasts search the natural world for as many species as they can find. The cause: To raise funds for the Center, and this year we raised money in memory of the late Elizabeth Farnsworth, whose spirit will always accompany our walks. The leaders: Laurie Sanders, naturalist extraordinaire and a legend in the Valley (and beyond) for her conservation work, who had the task of listing plant species; and Charley Eiseman and Julia Blyth, husband and wife team with outstanding chops as biologists who uncover the hidden worlds of invertebrates, record new species at an astonishing rate, and write books on the tracks and signs that insects leave behind. They listed the animal species.

The slope is too steep for permanent human use, so it’s been left alone for a hundred years or so. How do we know? Laurie took photos of some of the largest black birches we’ve seen in this watershed and a red oak some two feet in diameter at breast height, or about 4½ feet from the ground. June wildflowers were out, so we had a lesson in distinguishing jack-in-the-pulpit from wake-robin. Laurie also noted how non-native wintercreeper — also called climbing euonymus — was becoming ubiquitous in our woodlands, crowding out native groundcovers and vines. Invasives are never far from mind whenever we assay woodlands.

An acre or so of wetlands lies at the base of the slope, dominated by our native common cattail, with a little narrow-leaved cattail and some areas covered in reed canary grass, which now has both native and non-native components in its genetic line. The invasive reed Phragmites occupies an isolated patch, and the wetland is ringed with invasive multiflora rose. At this point, Charley and Julia began an extended series of “aahs” and “oohs” on the wonders of the invertebrate world, broken by silences when Charley took photographs. And what astonishing photographs! Images of leaves with the zigzag tunneling of leafminer larvae, even a shot of a leafminer cocoon.

As we moved slowly through the mucky wetlands, Charley continued his photography, taking images of a long-legged fly with gorgeous rainbow eyes, and a tiny jumping spider eating a newly-caught common ringlet butterfly three times its size. We finished the wetland insect part of our trip with a colorful black-and-gold robber fly, one that ambushes its insect prey.

Finally, we wanted to check along the Mill River. Aside from finding new plants and animals to add to our list, Laurie wanted to show us an Amur corktree, a relatively new invasive that she’s recently found in several sites in Northampton. This tree was introduced into New York City in the mid-1800s as a tree for parks, but has since been spread by birds and is now considered invasive in eastern Massachusetts and much of New York State. We did find the fully mature, healthy female corktree that Laurie had seen earlier, and hope it will be cut down soon. 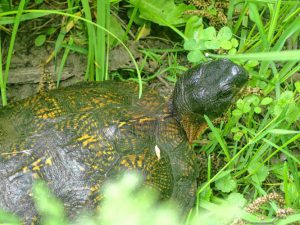 We also discovered this wood turtle along the Mill River. Julia Blythe

The morning trip ended on an incredible high — Julia sighted a female wood turtle, a species of special concern in our state and the first official discovery to our knowledge in the Mill River watershed. We were whooping with joy at the sight of this medium-sized turtle about 8 inches in length, with a grayish shell and yellow and orange patches on the black skin. We left it scuffling around in the leaf litter by the bank of the river.

That afternoon, Laurie, Julia and Charley led another group of amateur botanists from the New England Botanical Club on a hunt on the other side of the river from Smith College upstream. The final counts for the whole day from Laurie, Charley, and Julia? Laurie tallied roughly 200 plants plus birds, snails and signs from mammals making a final total of more than 350 species. Charley and Julia calculated 110 animal species, half of which were leafminers and gallmakers (their current focus of study). Two new leafminers will be formally named in an upcoming scientific paper.

So, if you plan to follow behind a proper naturalist, prepare to move slowly, stop frequently, take lots of photos, and chat often either to yourself or anyone available. Most of all, prepare yourself to be astonished and thankful to be in the world so deeply engaged with it.

John Sinton is Adjunct Professor of Landscape Architecture and Regional Planning at the University of Massachusetts, Amherst. He is a co-moderator of the citizens’ group the Mill River Greenway Initiative and an honorary board member of the Connecticut River Conservancy. His book “Devil’s Den to Lickingwater: The Mill River Through Landscape and History” will be released in mid-October by Levellers Press. For great insect photos by Charley Eiseman, visit tinyurl.com/earthmatters-42.