Forest history of the Pioneer Valley

A great, thick-waisted rock maple, maybe 150 years old, marks the corner of our property, healthy and with plenty of room inside for squirrels and other creatures. I think of it as ageless, even though it’s only twice as old as I am. Our maple, in fact, is a metronome that marks the tempo of change in the forests of the Pioneer Valley. We live not in the temperate, multi-millennial redwood forests of the West Coast, but in the Eastern Woodlands, which fire, hurricanes, high winds, insects and disease transform every few hundred years. Our forests are a mix of trees that can live anywhere from thirty to several hundred years.

What did these forests look like before the arrival of the Europeans in the early 17th century? Were they a true wilderness where no one had set foot before? What kinds of trees composed its mixture of species? For answers, we turn to the extraordinary work of archeologists, ecologists and the forest historians, many at the Harvard Forest in Petersham.

The first two questions have an easy answer. Indigenous people had occupied this valley for longer than 12,000 years before Europeans arrived and had witnessed major environmental transformations as the climate warmed after the last glaciation ended about 20,000 years ago. Simply put, our Pioneer Valley landscape has not lacked for humans these past dozen millennia.

The first people arrived in a landscape of tundra dominated by sedges with scattered birch, mountain avens and alder growing on the permafrost. Huge mammals — “megafauna” in zoological parlance — such as mastodons and mammoths roamed the region. About 13,000 years ago, spruce and jack pine replaced the tundra, followed by hemlock and white pine. Then oak became the dominant species about 8,000 years ago, and beech appeared about 3,000 years after that, at the same time as the megafauna became extinct. Over the last 7,000 years, the composition of our forests has shifted from time to time, but 90 percent of our tree species have been with us all along.

The Native Americans, with whom the Europeans made contact in the late 16th and early 17th centuries in the Northeast were Algonquian-speaking people who had come to New England and Canada 1,000 or more years ago. The forest landscape still defines much of their lives today, and here is how one Abenaki elder from the Champlain region described the origin of his people:

“For those of us from Missisquoi and other Western Abenaki places, we were made near Bitawbagok, Lake Champlain by Tabaldak, the Creator on Aki, the earth. We were created out of the wood of a tree that still thrives here. We have always been here, kin to the ancient forests.”

By cultivating favored species and/or removing others, Native people throughout North America have manipulated their landscapes for thousands of years to encourage the growth of useful plants, nut trees and habitat for game animals. After the three plant sisters — corn, squash and beans — arrived in New England from their Central American origins 800 years ago, Natives used fire to clear agricultural fields to plant corn-hills, some of which remained in cultivation for centuries. They also used fire to clear the understory of many forest areas, encouraging nut trees both for themselves and for game animals. 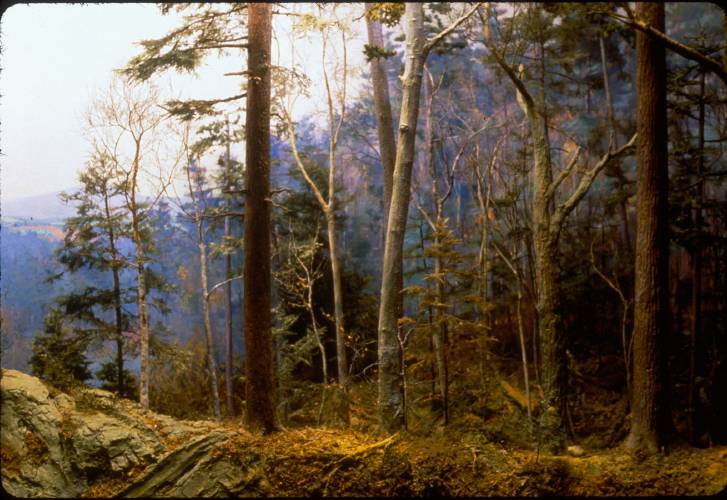 A mixed forest prior to European settlement, as envisioned in a diorama at Harvard Forest’s Fisher Museum in Petersham. Photo courtesy of Harvard Forest

From ongoing research, we can piece together an image of pre-colonial forests, which would have consisted of a mix of younger trees on flat and fertile alluvial floodplains and older forests on the uplands, some as old as 300 years. In 1600, oaks and pines were the most prevalent species, followed by maples, hemlock, beech, chestnut, hickory and several species of birch. Less frequent tree species included ash, cherry, poplar, basswood, elm and spruce.

Animals such as turtles and other reptiles, amphibians and insects would have been more numerous than they were following colonization. According to reports from some astonished 17th-century settlers, birds, fish, even ants swarmed in the millions during the height of summer. A full array of mammals provided clothing and meat. For clothing and sinew, there were otter, fisher, muskrat, beaver, fox and wolf. Much of the meat came from the big three: deer, bear and moose. And then there were the smaller game: rabbit, squirrel, raccoon, beaver, muskrat, otter, porcupine and woodchuck along with birds such as turkey, passenger pigeon and waterfowl. For fish, they had brook trout, perch, suckers, catfish, pickerel, sturgeon, lamprey, eel, shad, herring and salmon. The woodlands also provided plants for food and drink: Solomon’s seal, sumac, blueberries, raspberries, serviceberries, blackberries, strawberries and elderberries. Especially important to the Native diet were acorns, ground nuts, chestnuts, hickories and butternuts.

Algonquians lived through seasons of want in late winter and seasons of plenty in fall; they suffered through drought and flood while navigating environmental transformations through warm and cold eras. They created stable communities over several millennia and left present generations a series of lessons on the management of our woodlands, lessons from which we can still learn. The Europeans, who arrived in the second third of the 17th century, had other forest management plans in mind, however, and in my next column, we will witness the first of the great forest transformations that happened after their arrival.

John Sinton is Adjunct Professor of Landscape Architecture and Regional Planning at the University of Massachusetts, Amherst. He is a co-moderator of the citizens’ group the Mill River Greenway Initiative and an honorary board member of the Connecticut River Conservancy. His book “Devil’s Den to Lickingwater: The Mill River Through Landscape and History” was published last fall by Levellers Press. The second column in this series will appear in late spring or early summer.

One response to “Forest history of the Pioneer Valley”