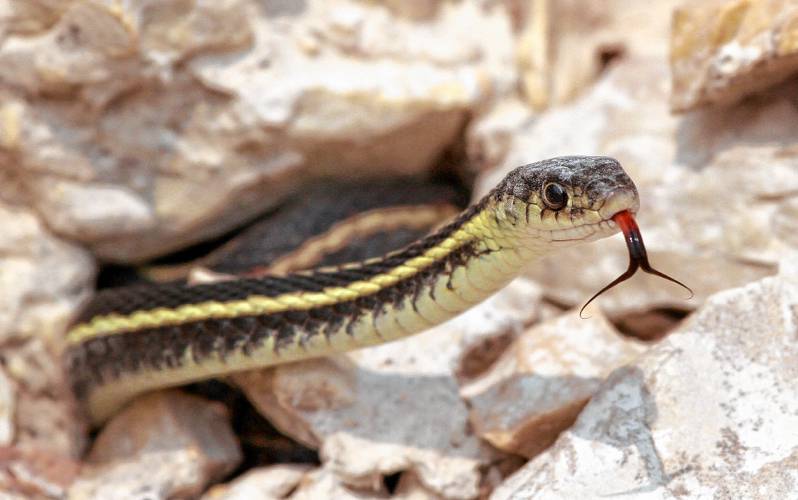 In nature there are many signs that spring is approaching. Beautiful sights (such as blossoming wildflowers) and sounds (like the increasing variety of bird songs) fill us with happy anticipation of the warmer weather and longer days to come.

But nature’s signs of spring aren’t limited to the traditionally beautiful. The creeping, crawling and slithering creatures of the forests and fields are also responding to the warmer temperatures and longer days. Common garter snakes (Thamnophis sirtalis) will soon be emerging en masse from their winter refuges in a remarkable annual spring event.

In March and April, just outside the entrances to certain underground cavities, you can find anywhere from dozens to thousands of green- and yellow-striped garter snakes sharing a small patch of ground. In their first activity since entering into hibernation (often called “brumation” in reptiles), the snakes gather together for a competitive and chaotic mating frenzy. 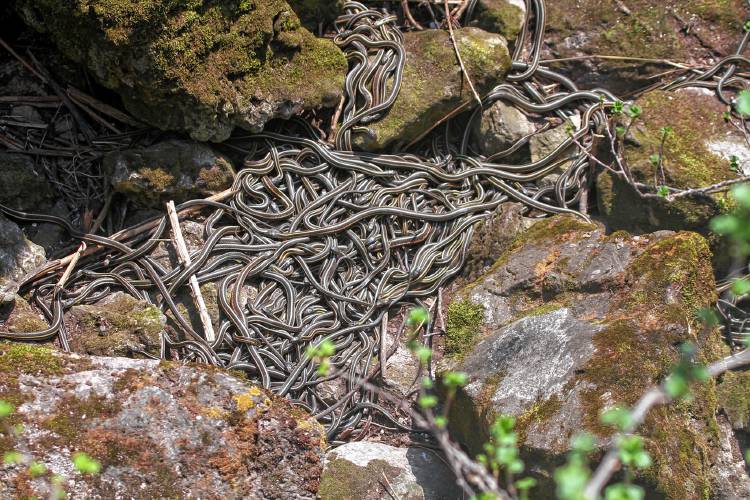 The common garter snake is probably the snake most often seen in Massachusetts (it was even made our state reptile in 2007), but it’s almost always a lone individual that we encounter. Like most other snakes, garters have no social behavior apart from mating. Adults and juveniles alike generally spread out to avoid competing for prey. The dense concentrations that occur for a few weeks in the spring are a result of the urge to mate, combined with their winter survival strategy.

Therefore, all of the snakes’ bodily functions, including respiration, heartbeat and metabolism, slow down as the temperature drops. This means a greatly reduced need for energy, which is perfect for a long winter without any food.

The first step in surviving winter for these reptiles is to stop eating a couple of weeks before becoming inactive. Unlike a black bear in its winter den, whose body can burn stored fat to maintain a safe body temperature during its deep sleep, a garter snake’s cold-blooded body cannot keep to a minimum safe temperature if it gets too cold. Cold temperature? Cold snake. Freezing temperature? Frozen, and soon-to-be dead, snake.

So the next step in their winter survival is to make their way to an overwintering site, a “hibernaculum.” A good hibernaculum is one in which the temperature inside stays above freezing. Farther south in the U. S. this can mean just curling up in a rotting log or wood pile, but in the northern U. S. and Canada this often means finding a safe place underground, below the frost line. This female garter snake is entwined in a “mating ball,” being sought by numerous other male snakes. Chris Friesen, via Creative Commons

Since every garter snake in a given population needs one, the number of suitable hibernacula in that population’s range will affect how many snakes show up come winter. When there aren’t a lot of good places to den up, a lot of snakes often converge on the same site. Piled on top of one another in their winter home, they are sluggish but alert, and are able to move deeper underground should the weather get even colder. A good hibernation site will be used year after year by the same snakes, but a particularly cold winter can result in a die-off at a site that was safe in previous years.

When spring finally rolls around and the survivors of winter begin to warm up, the urge to mate kicks in. Male garter snakes leave the den first, ready to slither into action as soon as a female emerges. As soon as she does, she is quickly mobbed by every male that detects her distinct sex-specific pheromone. At sites like the famous Narcisse Snake Dens in Manitoba, Canada, you can see up to 10,000 red-sided garters (T. sirtalis parietalis) outside a den, sharing a space the size of a living room, with up to 100 males writhing around one female.

This frenzy of activity is all the more remarkable considering that they haven’t eaten in months. Just as amazing is the way some males gain an edge over their many rivals. In a process known as kleptothermy (literally “stealing heat”), some males will produce the female pheromone, fooling other males into gathering around them, which allows the “impostor” to gain extra body heat and a boost in activity. This alternative tactic has been shown to lead to more mating success for these males.

While not always a spectacle like the thousands of snakes at the Narcisse Snake Dens, this amazing event will be happening all around us soon. There’s a garter snake hibernaculum near the former Hitchcock Center for the Environment building on Larch Hill in Amherst, and in years past I thrilled to see the handful of garters soaking up the sun next to one another, right on schedule. I’ll be visiting again for sure. To me, those scaly survivors are the perfect sign of spring.

Patrick O’Roark is an environmental educator at the Hitchcock Center for the Environment.