Getting to know the Hitchcock Center for the Environment’s neighbors 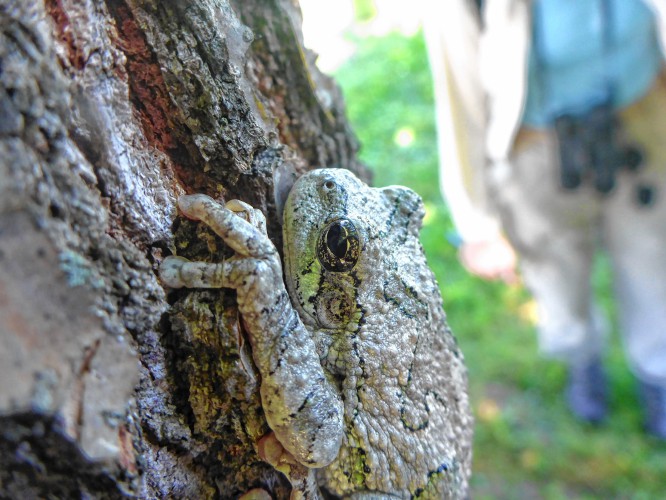 A highlight of the walk to identify species in the area surrounding the new Hitchcock Center for the Environment was finding this gray tree frog. JOSHUA ROSE

When we move to a new house, we want to know who are neighbors are. On Oct. 1, the Hitchcock Center held the grand opening for its new home at Hampshire College in Amherst. But Hitchcock naturalist Ted Watt couldn’t wait to start exploring the new site. So, back on June 18, 3½ months before the grand opening, Ted invited other nature lovers to join him for a “bioblitz” of Hitchcock’s home-to-be.

A bioblitz is an attempt to detect and identify as many species as possible in a defined area in a given period of time. Although a complete survey of Hitchcock’s new location will be a long-term project, every journey needs a first step; so Ted and seven volunteers spent a few hours of a sunny June day getting the species list off to a good start.

We started walking around what was then a construction site to a path into the woods. Once there, our pace slowed as we studied the many plant species. We found the usual exotic pests: multiflora rose, Oriental bittersweet, morrow honeysuckle, autumn olive, and others, promising long hours of weed control in the future.

But many native species were growing happily nearby: green ash, gray birch, tupelo, and American hornbeam intermingled with the common forest canopy of oaks, maples and pines.

Hitchcock naturalists can anticipate the exploding seedpods and hummingbird-magnet flowers of jewelweed, the hooded green bloom of Jack-in-the-pulpit and field horsetail — a “living fossil” whose relatives have existed on Earth for more than 300 million years.

Six species of ferns and five species of sedges also numbered among the 109 plant species documented that day.

We photographed most insects and spiders for later identification after we got home. Elderberry flowers contained a sawfly larva, a hoverfly and four different species of beetles including a small type of longhorn beetle. We saw a bowl-and-doily weaver spider and two species of jumping spiders, one of which was eating a fly when we photographed it.

A grass-stem-boring fly, Opomyza germinationis, was a first record from Massachusetts, according to the website BugGuide.net. Our list of moths and butterflies included a European cabbage white butterfly, an astrologer moth and a Hobomok skipper.

Although the neighborhood vernal pool was dry, a small water-filled pothole nearby contained at least six different species of diving beetles. Other insects included a meadow spittlebug, an eastern bumblebee, a carrot wasp, a bee-mimicking robber fly and a firefly-mimicking click beetle. And, of course, the inevitable mosquitoes!

As for animals with backbones, birds are usually the most diverse and most easily detected. The songs of rose-breasted grosbeak, warbling vireo and eastern wood-pewee drifted down from the trees, and a couple of cedar waxwings disappeared into a big pine.

Eastern cottontail, red squirrel and eastern chipmunk represented mammals, along with a probable meadow vole and a fox.

The vernal pool was down to damp mud, but we still found two amphibians there: a red-backed salamander and a young wood frog. A green frog and a massive American toad appeared later in the walk. But the highlight of our vertebrate list was a photogenic gray tree frog!

While most of the group was out in the woods, our youngest volunteer, age 10, and his mother stayed closer to the new building, collected samples from a nearby pond, and studied them using a digital microscope. They found the most unexpected of the day’s creatures. The samples were full of tiny crustaceans: shrimplike amphipods; bouncing cladocerans, relatives of the Daphnia familiar to many biology students; tiny, crayfish-like copepods dragging pairs of egg sacs and ostracods with bivalved shells that give them the names clam or seed shrimp.

A flatworm, well known for its regeneration ability, glided along the bottom. Several hydra, tiny freshwater relatives of jellyfish, stretched and contracted in the samples. Among them were brilliant green hydra containing symbiotic algae that photosynthesize inside their bodies, supplementing their diet. It was quite a haul!

All this is just the tip of a massive biodiversity iceberg, done in less than a day. Other bioblitzes frequently devote an entire day or weekend, and repeat in different seasons of successive years. So we’ve clearly just begun. Most residents of the vernal pool will be difficult to detect until the pool refills next spring. We observed no snakes or turtles and only a few amphibians. The birds we noted were all breeding residents; the area’s many migrants and winter residents spend their summer elsewhere.

Many insect species were not yet visible. We probably missed any number of nocturnal species. And we didn’t even start with the mushrooms or other fungi yet. Many more discoveries lie in wait around the new Hitchcock Center. Who wants to help us look?