Giants among us (silkworm moths, that is) 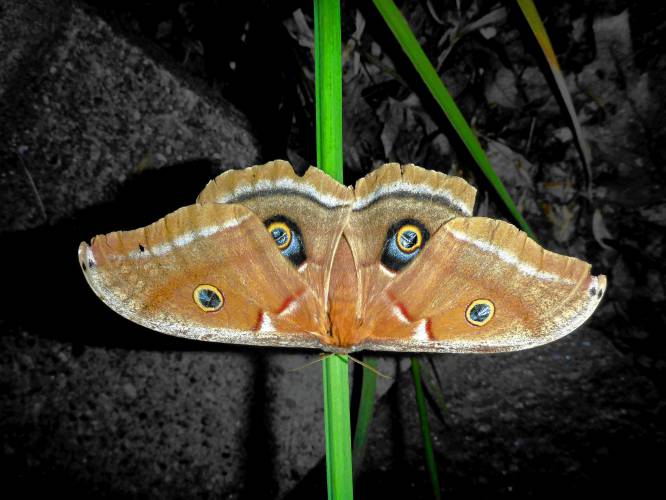 A polyphemus moth reared from eggs at the Hitchcock Center for the Environment. Joshua Rose

Being a naturalist means regularly receiving messages asking “What is this thing?”

I received one on June 1 from a fellow Hampshire Bird Club member. Her husband was doing tree work on a town common, and photographed a huge moth nearby. I recognized it as a polyphemus moth (Antheraea polyphemus), a member of the family Saturniidae, the giant silkworm moths.

Some of the largest moths in the world are saturniids, including the Hercules moth of New Guinea and Australia, with a wingspan reaching 11 inches. (For fans of monster flicks: I’m sure Godzilla’s rival Mothra belongs to this family.) Roughly 75 different saturniid species live in the U.S., including some of our best-known and most popular moths and caterpillars. This includes the luna moth, the great green beauty with long tails on its hindwings; the hickory horned devil, the huge and frightening-looking caterpillar of the regal moth and the Io moth, whose caterpillars are covered with stinging spines, and whose adult bears wing-spots that mimic the eyes of an owl. 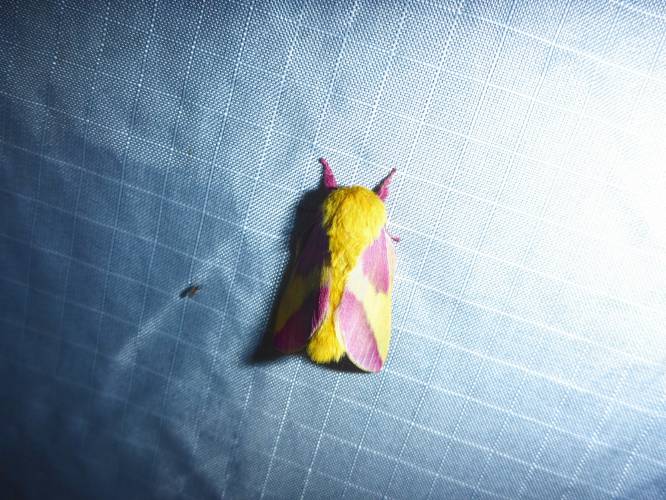 The rosy maple moth is a smaller species distinguished by the adult’s lovely pink and yellow coloration.

The adults of giant silkworm moths mostly fly in the late spring and early summer. They fly for only a few weeks, mating and laying eggs, then dying. The eggs hatch after a couple of weeks, and the caterpillars spend the summer binge-eating, growing as fast and fat as possible. Then the caterpillars spin cocoons and pupate through the winter, emerging as adult moths the following May or June.

The cocoon is indeed made of silk, not as high-quality as the true silkworms (family Bombycidae), but some communities in Asia do harvest it from wild cocoons or non-commercially rear species like the Atlas moth.

The adults’ flight season is short for a surprising reason: They never eat. They survive for their entire pupation and adulthood on fat stored up by the caterpillar. In this way they parallel mayflies (very short-lived but beautiful insects that emerge in spring), but the slender-bodied mayfly’s larva can only store up enough fat to survive for a couple of days, whereas the giant silkworm moths — lunas can grow to more than 22 grams, and Atlases can exceed 25 grams — have round, fat bodies which sustain some adults for over a week. 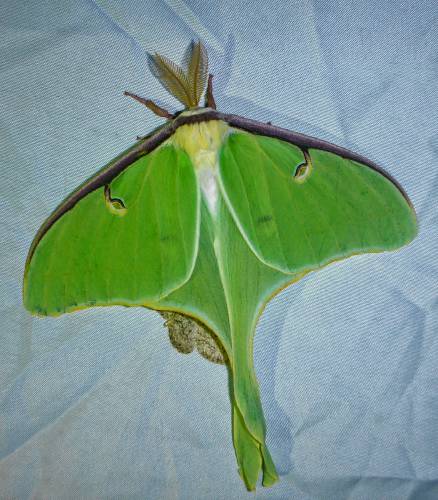 Saturniids are sadly rarer than they once were. Some of their decline is due to habitat loss and pesticides, but one extra factor hit the saturniids especially hard. Around 1906, the parasitic fly Compsilura concinnata was hastily introduced to the U.S. in an attempt to control gypsy moths.

Unfortunately, it was not sufficiently tested to make sure they’d only kill gypsy moths. The saturniid caterpillars’ large sizes and lengthy larval stage makes them an especially tempting target; such attacks are their main source of mortality. Many naturalists, concerned about the giant silkworms’ steep decline, now gather eggs from wild moths, hatch and rear the caterpillars in captivity, keep them as safe as possible from Compsilura and other natural enemies, and then release the adults to bolsters wild populations.

When my friend sent me the polyphemus photo, and mentioned that her husband was concerned that the moth might get injured, I went to relocate it to a safer location. I scooped it up in a box with a few nearby leaves. It fluttered as my wife and I looked at it, and I was worrying that it would damage its already worn-looking wings, so I put it in a dark closet to calm down. It was vulnerable to birds and other predators during daylight, so I kept it inside all day, and released it by our front door after dark. 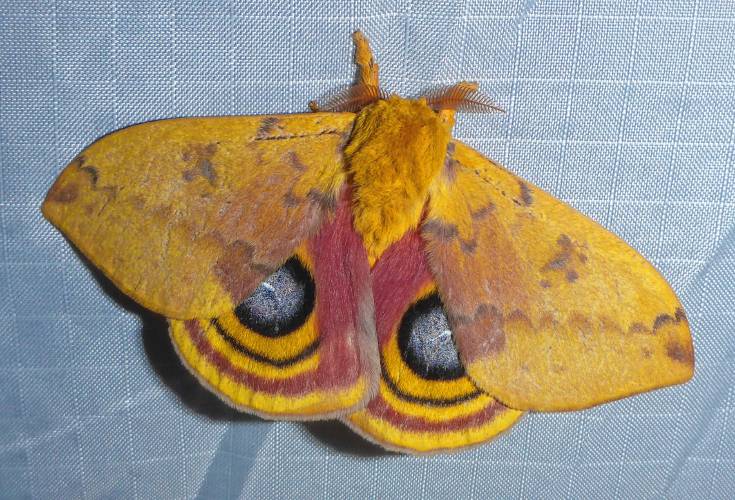 The next morning I found the moth’s disembodied wings by our front door. Apparently it was already too old to fly away, having already burned off most of its fat reserves, so it remained by our house all night, and was probably nabbed by our local eastern phoebes around sunrise.

But the story didn’t end there! The day before, I took the moth out of the closet to show my children, and discovered that she had laid eggs on the leaves! I contacted Hitchcock Center naturalists Jessica Schultz and Ted Watt, who expressed interest in adopting the eggs and rearing the caterpillars. I dropped off the eggs a few days later, and put Watt and Schultz in touch with a friend who was experienced at rearing silkworms and could tell them what to do. Just 11 days later, the caterpillars hatched, spent the summer pigging out on oak leaves, and started disappearing into cocoons before the end of July. Apparently some may have jumped the gun and already emerged as adult moths; maybe the Center’s lobby was a bit too warm for the cocoons and fooled them into thinking it was already spring. But that message back in June led to a whole summer of caterpillars, cocoons and moths in the Hitchcock Center. So next May, be on the lookout for these massive moths, and perhaps you’ll wind up raising your own brood of giant silkworms!