Global is local: How the climate is changing in the Northeast 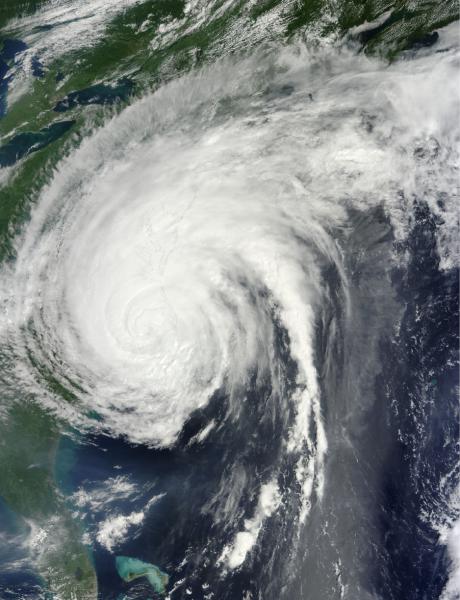 NASA Hurricane Irene over the East Coast in 2011 caused damaging floods in Massachusetts and Vermont. The Northeast can expect more frequent extreme precipitation events as a result of global warming.

Climate change is a huge issue for the entire planet and it touches all parts of our lives. We can see it right here in our region. The good news is that citizens and institutions are responding.

From 1970 to 2000, change accelerated: Temperatures rose about three times as fast as the century’s average. (Globally, 2014 was the warmest year on record; in fact, most of the last 14 years have set new temperature records.)

If we don’t reduce greenhouse gas emissions such as carbon dioxide, our winters could warm by as much as 8 to 12 degrees on average and our summers by 6 to 14 degrees. Climate scientists expect that Northeast cities like Boston could see 30 to 60 summer days per year that exceed 90 degrees by mid-century, with as many as 24 days breaking 100 degrees annually by century’s end — temperature extremes that North Carolina now sees every year.

These temperature changes have major effects on rain and snowfall in New England.

Another study found that the Northeast had a 71 percent increase in the number of extreme events between 1958 and 2010, the highest in the country. But projections for this century also show a greater likelihood of summer and fall droughts and as much as a 25 percent loss in the winter snow season.

Absorbing numbers like these can be difficult, so let’s look at what these projections mean in terms of our lives and livelihoods.

The increases in extremely hot summer days will especially affect infants, the elderly, outdoor workers and people who can’t afford air conditioning. Adverse health effects will come from heat stress and air pollution, which is exacerbated by heat.

Heat stress isn’t limited to humans, either: Livestock and crops can suffer as well. Insects, including those that carry disease and others that damage plants, often accelerate their growth and reproduction in response to higher temperatures, increasing risks to human and animal health, crop production and the health of our forests. Milder winters combined with longer warm seasons and more frequent floods point to higher numbers of mosquitoes, ticks and other organisms that can transmit diseases such as West Nile virus and Lyme disease.

In the long term, higher temperatures are likely to make our area unsuitable for some of the crops and tree species New England farmers depend on. For example, cranberries may no longer grow on Cape Cod or elsewhere in Massachusetts. Also, our state may see an end to maple syrup production.

Many of the fruit varieties currently grown locally may no longer be viable, though some longer-season crops may take their place. We could see a significant change in the character of our cultivated landscape as a result of climate change.

On one hand, the frequency and duration of droughts are expected to rise; on the other hand, we can expect to see more frequent occurrences of heavy precipitation. Combined with sea level rise, which is already happening, coastal areas can expect to see more frequent, damaging floods. Inland, as happened with Hurricane Irene in 2011, severe flooding may also become more common as rivers and streams are inundated by heavy rainfall.

All of these forecasts are based on published, peer-reviewed assessments of conditions in the Northeast. But the effects they discuss are the result of worldwide emissions of greenhouse gases, not just those originating here.

Nonetheless, this region can show the way, demonstrating that reducing emissions is doable. Massachusetts, for example, has reduced carbon emissions from power plants by almost half, largely by converting from coal to natural gas. This is a temporary solution at best, but potentially helpful.

Meanwhile, Massachusetts is a leader among the states in promoting and building renewable energy systems. Although curbing emissions at the state or regional level can’t prevent the impacts I’ve described, it can help move the United States and other nations toward achievable reductions around the world.

Advocacy groups and citizens play important roles in keeping this process moving. Here, groups like the Better Future Project, 350 Massachusetts and Climate Action NOW Massachusetts are pressing for the state’s pension fund to divest fossil-fuel corporations from its investment portfolio. If this succeeds, we would be the first state to take such action.

Others are helping promote bills before the state senate to place a price on carbon emissions. Bay Staters can pride ourselves on our leadership in responding to the climate challenge. There is always more to do, and we have a responsibility to make sure that Massachusetts keeps leading by example.

Michael Dover is a retired environmental scientist and a former member of the board of the Hitchcock Center for the Environment. To learn more about the groups mentioned above, visit www.betterfutureproject.org, www.350ma.org, and www.climateactionnowma.org. For a state-by-state comparison of responses to climate change, see www.earthjustice.org/features/map-coming-clean-state-of-u-s-energy.

This is the first of a three-part series on climate change. The second column, focusing on barriers to accepting the reality of climate change, will appear March 28; the third, about climate action, will be published May 23.