How birds and other organisms can tell us where we are 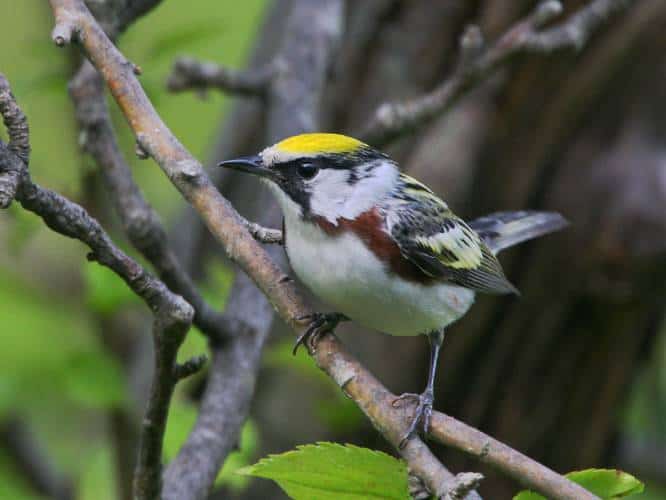 A male chestnut-sided warbler, a bird that breeds in the northeastern U.S. and southeast Canada, is in his breeding colors for only a few months out of the year. John Van de Graaff

The ways birds use the sun, the stars, their own internal clocks, the Earth’s magnetic field, odors, and other cues to navigate are well documented. Birds can also help a human to know his or her location.

Last year while on a walk, I considered what the birds as well as some plants and a mammal could tell me about where I was.

For a start, American robins, yellow warblers, brown-headed cowbirds, cedar waxwings, Eastern towhees and mourning doves were useful. These species normally occur together only in North America where each is common and widespread. Each of these species has rarely wandered to Europe, but seeing multiple individuals of all of these species at the same time and place would be extremely unlikely anywhere but North America.

My observation of an American robin sitting on its nest was further evidence that I was in North America, the breeding range of that bird.

So, I had narrowed my position to roughly a seventh of the world’s land area — but where in North America was I?

The presence of cedar waxwings and mourning doves ruled out the far north of the continent, and an American robin’s nest ruled out southern Florida.

Attention to details of these birds helped. Obvious white spots on the corners of the American robins’ tails indicated that I was not on the West Coast, where robins usually lack these spots or have small ones. None of the robins I saw had the very dark backs that I’d expect to see in Newfoundland, ruling out that part of Canada. The bright coloration of the yellow warblers indicated that I was not in the breeding range of the paler northern populations. Eastern towhees ruled out much of Maine and eastern Canada, and their dark red eyes told me that I was not in the range of the pale-eyed population of the southeastern states.

Wild turkeys — 11 adults and 17 poults — eliminated most of Canada from consideration.

Listening to the tempo of drumbeats helped. A hairy woodpecker’s rapid tattoo did not narrow my range in North America, but the accelerating roll of a pileated woodpecker eliminated most of the Great Plains and Rocky Mountains. The syncopated tapping of a yellow-bellied sapsucker is likely to be heard overlapping with the ranges of the other birds already noted only in a relatively small area of the Appalachians, northeastern United States, and southeastern Canada, although the similar tapping of other sapsuckers can be heard farther west.

The birds of many species singing lustily, the robin’s nest, the turkey poults, an American woodcock chick, and the spectacular full breeding plumage of male scarlet tanagers and chestnut-sided warblers all told me that I was in breeding season, probably May or June. The collection of flowers in bloom further suggested mid- to late June; indeed the common St. John’s-worts I saw in flower were named for their blossoming around St. John’s Day, June 24.

Southern species like northern cardinal and tufted titmouse would have been more informative a century ago, but their recent northward range expansions made them less useful for narrowing my location.

Many other birds — Baltimore oriole, ovenbird, red-eyed vireo, chimney swift, American redstart, gray catbird, blue jay, Eastern kingbird, and more — confirmed that I was in the northeastern U.S. or southeastern Canada, with the mix of birds suggesting a forest edge. The absence of European starling, house sparrow and pigeon from my observations indicated that I was not in an urban or farm habitat

Attention to organisms other than birds narrowed my range even further. Sassafras eliminated much of northern New England. Mountain laurel does not grow into the western Great Lakes region. On a trip to the same area two days before, I had watched a fisher, a mammal that does not range very far south in the eastern United States. Had I been more familiar with plants and their ranges I could have narrowed my location even more.

Based on my observations of birds and of a few other organisms, I could be reasonably confident in saying that I was in an area of the northeastern United States corresponding roughly to about two tenths of one percent of the Earth’s land area, and that I was there in mid- to late June. A map and a calendar could have told me that I was in the Quabbin Park in Ware on June 23, and a device receiving satellite signals could have given me my location to a thousandth of a degree.

Far more satisfying than that technological precision, though, my attention to the life around me contributed to my SPG — Sense of Position on the Globe.