How pigeons found their niche alongside us

A story: Many thousands of years ago a bird species nested on cliff ledges from central Asia, across north Africa, to parts of Europe. This bird fed on grassland seeds, often many miles from the cliffs, and could find its way over long distances between feeding grounds and nests. Its population was probably limited by availability of cliffs within reasonable commuting distance of seed-producing open country.

Then, around 10,000 years ago, humans modified the birds’ habitat. We built houses, towns, forts and barns. We dug up natural grasslands and planted grains. We domesticated various animals and scattered feed to that livestock.

From the birds’ perspective, we built artificial cliff nest sites, created seed-producing grasslands, and gathered, stored and scattered seeds close to the cliffs.

The birds took advantage of the changed conditions. They nested on ledges (e.g., windowsills) on the new cliffs. They fed in the new grain fields and on the stored and scattered grain in farmyards.

People, too, took advantage of the new situation. We could reach out the windows and gather eggs, nestlings or adult birds for food. We realized that we could encourage the birds by building structures with many appropriate ledges. The birds’ population increased, and its range widened as buildings and agriculture spread.

The two species, bird and human, domesticated each other, to the benefit of both. People named the birds — in English, the name is “pigeon.”

This story might not be accurate in every detail. The exact dates, locations and sequence of events are not recorded, but something like what I described above happened. 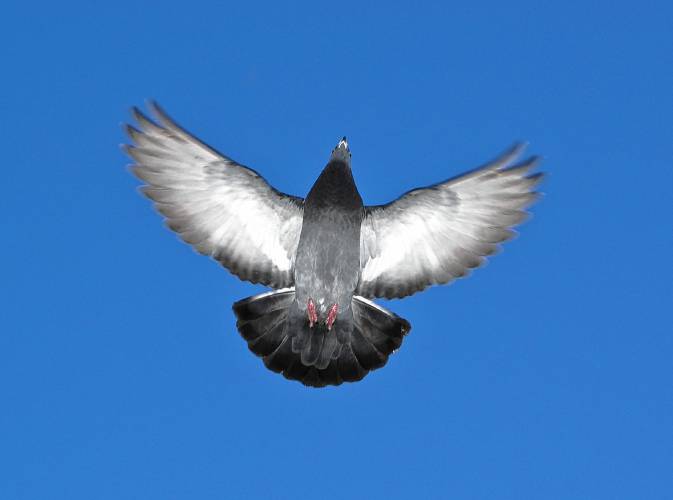 A pigeon in flight, showing the typical medium-gray tail feathers, with a dark band the end, and white edging above the dark band on the outermost feathers. Mark Huett/via Flickr

In more recent centuries, we have better documentation. Pigeons might well be the first domesticated birds, and they have long been kept and bred for food, carrying messages, racing and show. As Europeans immigrated into various non-European continents, they brought pigeons with them.

In North America, domestic pigeons are documented from at least as early as 1606. As pigeons escaped, they established free-living populations, especially where humans provided food and suitable nest sites on buildings, bridges and other structures. Pigeon populations show, in their varied colors, sizes and shapes, that they continue to incorporate escapees of many domestic breeds.

Pigeons in their new continents and habitats demonstrate evolution as it happens. As with many native species that have been here much longer, pigeons in North America have evolved to typically larger body sizes in the north and smaller sizes in the south.

This gradual change in body size over a long distance is thought to benefit temperature regulation of the birds. A larger animal has less surface area per unit of volume and thus loses heat at a lower rate than does a similarly shaped smaller animal with proportionately more surface area.

Pigeons that are all-dark in coloration are more common in cities than elsewhere. Why?

Feathers, once formed, are dead, isolated from blood flow. A recent study by French researchers suggests that dark pigment in feathers sequesters lead that would otherwise harm developing pigeons. If young birds with dark feathers survive at a significantly greater rate in polluted cities, this sequestering could explain the prevalence of dark urban pigeons. Scientists will need data from more pigeon populations to test this hypothesis.

Pigeons are readily available to a birdwatcher learning to pay close attention to feather patterns.

I have long been fascinated by the details of pigeon tails. A typical pigeon tail is mostly medium gray, with a dark, almost black band just before the end, and a thin paler band at the end of the tail feathers; this band is often abraded and difficult to detect. The pattern holds for all 12 tail feathers, except for the outermost vane of the outermost tail feathers, which have white edging above the dark band.

Many birds have white outer tail feathers, but the pigeon’s is unusual in not having the white go all the way to the end, and in having only the outer part of the feather white. This tail pattern is not necessary for identification of a pigeon, and most field guide illustrators omit some details. On birds showing substantial evidence of domestic ancestry the tail, like the rest of the bird, might look very different, from all dark to all white.

In Henry Wadsworth Longfellow’s play “John Endicott,” the character Walter Merry, charged with enforcing Sabbath laws, complains about “the pigeons yonder … now the only Sabbath-breakers left … [who] gather every Sabbath afternoon in noisy congregation on my roof.”

On any day of the week I prefer to consider pigeon congregations as opportunities to admire adaptation to modified environments, to consider our shared history, and to observe closely a fascinating bird.