How seeds survive the winter 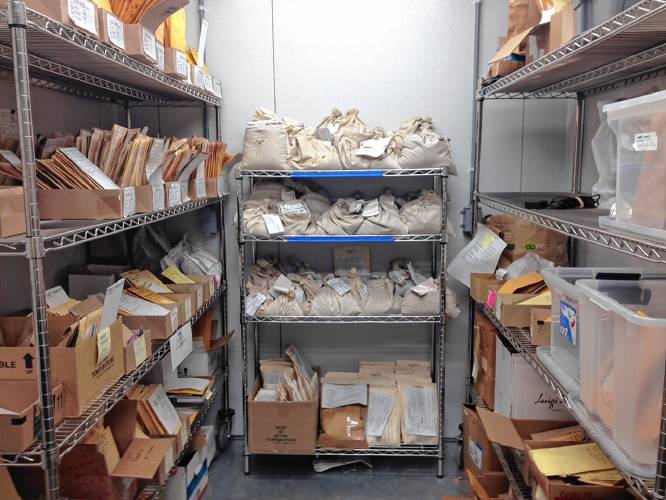 View of the seed storage unit at Nasami Farm in Whately. The seeds in bags (center) will be planted at sites damaged by Hurricane Sandy in 2012. Erika Norden

In an “Earth Matters” column this August, I marveled at the myriad methods by which seeds get around. Imagine you’re a seed that has traveled far and landed in a happy place, rich in soil and free of other competing plants. Now you face a new challenge as the days shorten and the weather gets colder. How will you survive the winter?

Winter poses two primary challenges to seeds: drought and cold. Drought in winter means a lack of liquid water. Most of the precipitation that falls in winter is in the form of snow. Snow is a useful insulator for seeds, but they can’t imbibe the dry form of frozen water, so they must prepare themselves for a long period of privation.

The second test is cold. If you’re a seed that lands on the soil surface, you’ll be faced with freezing temperatures, and the cells of the embryo (the baby plant) that you carry inside you will be vulnerable. When water freezes inside a cell, it encapsulates all the organs inside that cell in ice. Water crystals at freezing level are, surprisingly, less dense than water in its liquid form.

At freezing temperatures those water molecules are held at arm’s length, whereas liquid water molecules all hew to each other tightly. Thus, those ice crystals cause the cellular membranes around them to expand, and potentially to burst. And if water has permeated into the spaces between plant cells inside the seed, the whole seed can explode.

How does a seed deal with these stresses? Hormones rule a plant, much as they do humans. There is a massively important hormone, called abscisic acid (ABA) that governs the protection of cells and many other vital functions. As you’re reading this article, perhaps you’re seeing the trees around your house changing the colors of their leaves and dropping those leaves inconveniently onto your driveway. Abscisic acid is the hormone causing all of this “abscission” (from the Latin, to cut away). As ABA is accumulating at the junctions of leaves, causing them to drop away from their twigs, it is also moving into seeds to provision them with the tools they’ll need to survive both drought and cold.

ABA acts on genes within the seed to increase the production of so-called chaperonin proteins that will protect — or chaperone — the cell membranes against the pressures of freezing and drought. It also slows metabolism of cells within the seed, preparing them for the Big Sleep. Respiration slows down and the embryo enters a state of suspended animation called dormancy.

This dormant state can last for one winter, or many. Some seeds of the narrow-leaved campion (Silene stenophylla, a relative of our common plant, bouncing bet) were excavated from squirrel burrows in 2007, and date to 31,800 years of age. Three of the embryos extracted from those seeds germinated and grew to reproduce on their own.

Mature seeds of the Judean date palm (Phoenix dactylifera) and the sacred lotus (Nelumbo nucifera) have germinated successfully after 1,300 to 2,000 years, respectively, in dormancy. Maybe the terms “the Phoenix rises from the ashes,” or “the sacred” seed convey the amazing qualities of these and other plant species.

Most of our New England seeds can last for several years in a dormant state, only to rise out of the soil when conditions are right. They respond sensitively, via other hormones such as gibberellic acid, to an opening in the forest canopy, which changes the light hitting the seeds and sends them the signal to germinate. Or they’re brought to the soil surface by frost-heaving or a spring rain. Or a curious bird or chipmunk digs them up and nibbles at their tough seed coat, enabling the embryo to break its bounds.

We humans enjoy the miracle of plant germination when we’ve been keeping our crop seeds in moist, cold conditions all winter in our fridges and then plant them outside.

Seed dormancy means a lot to me as a conservation biologist. One important tool in the long-term conservation and restoration of rare plants is the ability to store their seeds in a repository. The amazing longevity of seeds enables us to see far into the future, when we can restore plant populations, add to their genetic diversity, and potentially move seeds into new latitudes when climate warming threatens their current habitats.

Some seeds, though, do not take well to drying, freezing and dormancy, including oaks and some other bigger-seeded plant species. It’s a peculiarity of their own physiology, and the history of where and when they evolved. Those of us who are deeply involved in saving seeds consider these a challenge and are developing ways to store them so they survive.

Seeds harbor the genetic diversity of plant species and can last for a long time. As the habitats of plants are changing due to climate fluctuations, land development, and crises arising from unprecedented major storms and other stressors, plant ecologists and even a citizen-scientist army of gardeners are seeking ways to preserve this diversity in the best ways plants themselves have evolved to do so: in a seed.

Elizabeth Farnsworth is Senior Research Ecologist with New England Wild Flower Society, the largest seed bank in the region, and is curating their collection of seeds from rare plants.