How the English colonists transformed the forests of the Pioneer Valley

In 1600, the 125,000 Native people who lived in New England had reached a dynamic equilibrium with their forested landscape through thousands of years of manipulation and accommodation. (I described this relationship in Part 1 of this series, published in March.) Then their world fell apart.

Fleeing the Civil Wars of England and searching for a land on which to impose their own faith and habits of living, English colonists began pouring into New England in the 17th century and numbered some 100,000 by 1700. They arrived with a set of needs that would change of face of the land. They needed open fields for crops and orchards, meadows on which to graze livestock, and lumber — for building and heating houses, for fences and machines, and for dams on rivers to power mills.

The magnificent forests of the Native’s homelands contained millions of large trees, many from two to two-and-a-half feet in diameter — pine, oak, chestnut, maple, ash, birch and beech two to three hundred years old, each tree containing more than a cord of wood. Native people had already cleared out some of the underbrush so that, as the great 19th-century diarist Sylvester Judd noted, “a deer could be seen at 40 rods [660 feet] on the wooded hills.” The English, following the example of the Natives, used fire to suppress the undergrowth so that “there were some splendid burnings in the woods on the hills and mountains, around this valley, especially at night,” as Judd wrote. 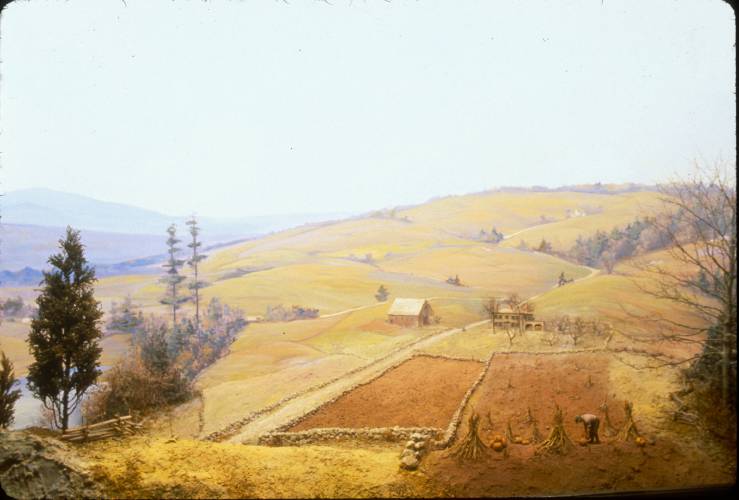 A New England landscape at the height of forest clearing and agriculture (1830-1880), as envisioned in a diorama at Harvard Forest’s Fisher Museum in Petersham. Photo courtesy of Harvard Forest

Over the first half-century of English occupation, the several thousand souls of the Connecticut River Valley had cut so much timber that most towns had to regulate the cutting and export of wood. Oak, chestnut and pine were in highest demand for construction, for fence rails and clapboards and shingles. The English required huge amounts of hardwood for heating and cooking during these cold years of the so-called Little Ice Age — a period of moderate cooling that in North America extended from the early 1600s into the 19th century. Towns would provide fifty to eighty cords of wood for their clergy’s large houses. Judd figured that in the mid-18th century, the hundred households in Hatfield required 3,000 cords per year for their needs.

During their first hundred years, from 1650 to 1750, English colonists cleared most of the woodland around population centers from New Haven to Hartford to Springfield up to Deerfield at the colonial frontier. The next two generations of Valley children moved into the hilltowns on both sides of the Connecticut Valley where they turned the landscape from old-growth forest to farmland and grasslands within 60 years.

Why did this occur in the late 18th century? Two things happened. First, the incessant wars in North America ended after the American Revolution in 1783, leaving the American colonists in possession of almost all Native lands. Young families immediately populated the hillsides. Second, hilltown folks discovered that potash was their basic source of cash in an era when cash was very scarce. Potash — potassium carbonate from the residue of burned wood — had been used since time immemorial for soap, bleaches, glass and fertilizer. With the industrial revolution in textile manufacturing, potash became enormously important to the British, who had already cut over their forests. By the time of the American Revolution, England was importing more than 60% of its potash from the American colonies. 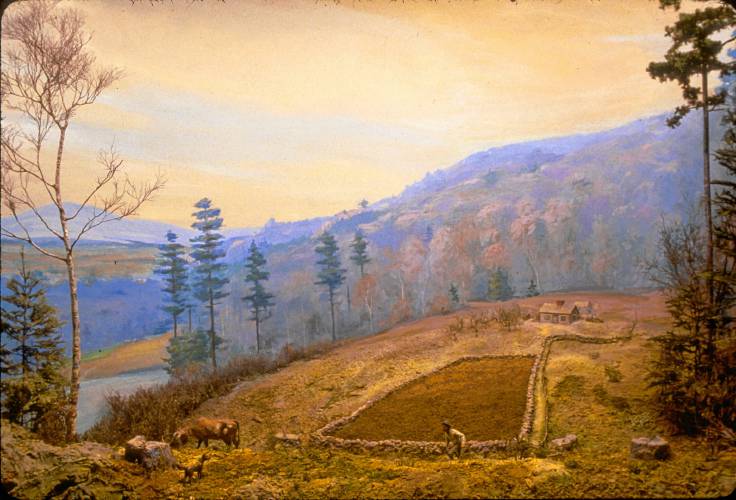 An early subsistence farm in New England (1740-1780), as envisioned in a diorama at Harvard Forest’s Fisher Museum in Petersham. Photo courtesy of Harvard Forest

The demand for home lots and potash caused the great cutting of the woodlands, one that went far beyond the subsistence requirements of farm families. As young settlers cut down the forest, they opened up vast areas not only to grassland but to erosion that washed and gullied the topsoil from hillsides everywhere. With few deep-rooted trees to anchor it or the forest mulch to insulate it, the soil and rock rolled and rushed into rivers, muddying waters and destroying aquatic life.

In the space of barely 150 years, habitat destruction and hunting extirpated wildlife. Most fur-bearers, such as beaver, were gone by 1700, mountain lions and most turkeys by 1800, deer and passenger pigeon by 1850. The remaining wildlife and woodlands were no longer as diverse as before.

Those Europeans who settled in old-growth forest, felling 250-year-old oak, chestnut and maple trees, were surrounded by grasslands by the time they reached old age. They had grown up listening to the songs of warblers and thrushes and ended their days in the midst of the whistles and trills of bobolinks, whip-poor-wills and sparrows. The smell of manure replaced that of sawdust. They had physically transformed their own world and sent westward a horde of youngsters eager to repeat the process for the next several generations in Central New York, Ohio and beyond.

Our story does not end here, of course. Yet more transformations occurred in the late 19th century when the woodlands returned and a global array of plants, animals and diseases invaded the Valley. That story will be the subject of our next installment.

John Sinton is Adjunct Professor of Landscape Architecture and Regional Planning at the University of Massachusetts, Amherst. He is a co-moderator of the citizens’ group the Mill River Greenway Initiative and an honorary board member of the Connecticut River Conservancy. His book “Devil’s Den to Lickingwater: The Mill River Through Landscape and History” was published last fall by Levellers Press. The first column in this series was published in March 2019. Part 3 will appear in the fall.