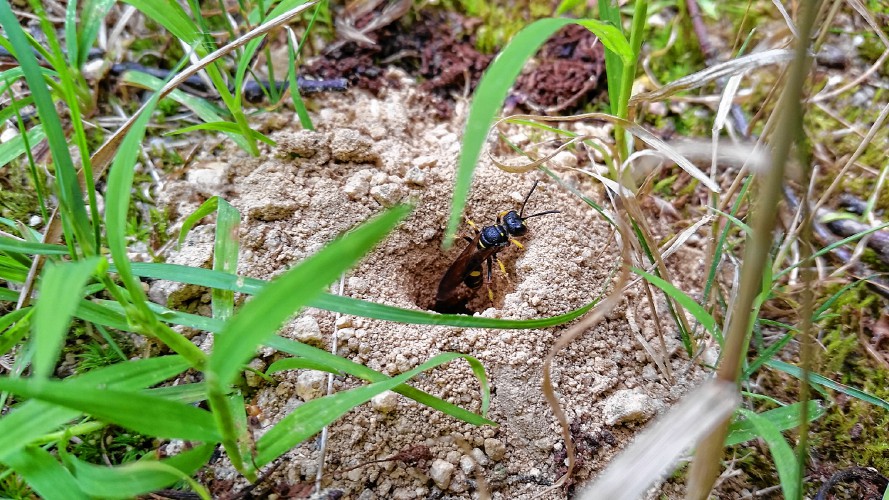 A Cerceris wasp emerging from her nest JESSICA SCHULTZ

By Jessica Schultz For the Gazette

Walking through the forest one summer day on Brushy Mountain in Leverett, I found myself standing on a woods road, looking down on a patch of dirt dotted with perfectly round holes. At first glance, the black holes appeared to be an empty mystery.

But I waited and watched, and was rewarded with a series of micro-observations of a previously unnoticed world of insects that dig, hunt and, incidentally, provide a valuable service to us.

The holes’ creators are solitary, flighty and shy: ground-nesting black and yellow female Cerceris wasps in the family Crabronidae.

They typically build their nests near females of the same species for protection, but unlike social insects they do not work together to meet mutual needs or to defend a common nest.

Nests are often located in compacted soil in woodlands that harbor the wasps’ preferred prey species.

A nest consists of a central tunnel off of which the wasp creates chambers. In each chamber she places a beetle that she has paralyzed with her stinger. Then she lays an egg on it and closes the chamber.

When all cells are thus filled, she closes the tunnel and then dies, leaving the eggs to hatch the following spring.

Larvae emerge from the eggs eat the paralyzed insect prey, and cocoon underground during the winter season. In spring, adult wasps emerge from their pupal cases and dig their way up and out of the tunnel.

Males typically emerge before females in mid-June and remain in the area of the nest, feeding on native flower nectar until the females emerge. Mating occurs fairly soon and the purpose of the male wasp’s life has been accomplished; he dies soon afterward.

Females continue to live for a short time longer to feed, build nests, find food for larvae and lay eggs. 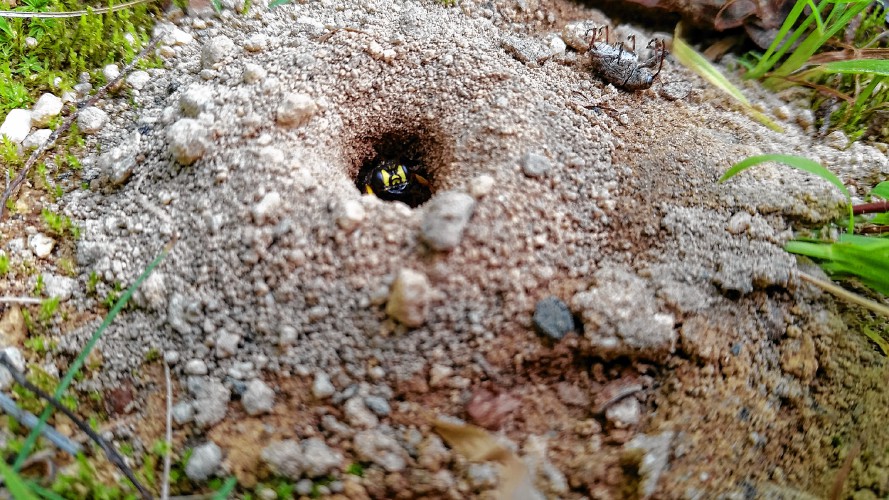 The Cerceris wasp I observed is a beetle hunter. Flying low across the forest floor investigating shadows and hiding places, the wasps hunt prey for their larvae to feed on. As I watched, one female flew to her nest carrying a weevil between her legs.

Her prey was probably a species of acorn weevil (in the genus Curculio), a common beetle, that had emerged after its own one or two years of pupating in the soil. The plump beetle was en route to return below ground, to provide a satisfying meal for a hungry young wasp larva. As I watched, the beetle was deposited, on its back, to the side of the nest while additional excavation was completed.

The Cerceris genus of wasps contains over 850 species, a handful of which live out their lives in western Massachusetts and other parts of New England. Mostly unnoticed by humans, they can serve as useful indicator species for forest health; a diversity of wasp species means that they can prey on a diversity of other insect species that themselves depend on a functioning forest. The wasps are known to feed on at least 100 different species of insects found in their ranges.

By sampling wasp catches, citizen scientists and entomologists can determine the presence of specific indicator species in forest stands.

One related local wasp species, the smoky-winged beetle bandit, Cerceris fummipenis, hunts for insects like the small emerald ash borer (Agrilus planipennis), a buprestid beetle. The borer is a pest of significant concern, first found in western Massachusetts in 2012, which can devastate stands of ash trees.

In a technique known as biosurveillance, scientists can use Cerceris fummipenis to detect the presence of the borer with an accuracy far greater than human-devised detection tools. This gives forest managers the ability to take decisive action in the face of a potential pest infestation.

In 2015, volunteers monitored 141 sites across the state, collecting a total of 648 buprestid beetles. Roughly half of those were Agrilus species, but fortunately none was the emerald ash borer. One of these days, this surveillance tool may help prevent major outbreaks of the borer.

Jessica Schultz is Communication and Capital Project Coordinator at the Hitchcock Center for the Environment. She has a fondness for insects and has been known to eat them occasionally and intentionally.

You can learn more about Cerceris wasp biosurveillance at  and register to become a Wasp Watcher.