How worrisome is the mosquito menace? Not so much here in Massachusetts

By JOSHUA ROSE For the Gazette

Even in these chilly days, it’s worth remembering that warmer days are ahead — and with them come mosquitoes.

Every summer we see more headlines: West Nile Virus, Eastern Equine Encephalitis, Zika and others. Last year was the worst on record for EEE in Massachusetts, killing three people.

Some communities spray pesticide from trucks or airplanes to control mosquitoes. Many homeowners pay private companies to spray their yards. Parents slather their children with DEET. A press release from the Centers for Disease Control proclaims “Mosquito Bites: Everyone is at Risk!”

How afraid should we be? Do we need to exterminate all mosquitoes for our safety? Spoiler alert: Not very, and no. 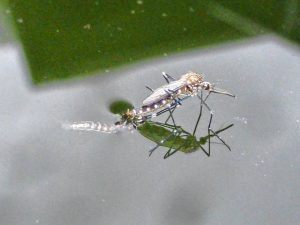 The Asian rock pool mosquito has a great deal in common with the Asian tiger mosquito. Both are nonnative in this country, and both are container breeders, prefer the blood of mammals, and are important vectors of West Nile Virus. This one emerged from its aquatic pupal stage in a greenhouse in Amherst. FOR THE GAZETTE/JOSHUA ROSE

EEE symptoms are terrible when they happen, but they happen far less often than news reporting might lead us to believe. One article claims “The rare but dangerous virus… is deadly in 1 in 3 people.”

Actually, fewer than 5% of people infected with the virus manifest any symptoms; the 1 in 3 statistic applies to those with encephalitis symptoms, not merely the virus infection. Between 2009 and 2018, only three counties in the U.S. had more than two cases per 200,000 people.

And many who appear to have it don’t: In 2019, Massachusetts’ state epidemiologist reported that more than 400 people reporting EEE-like symptoms tested negative for the virus, while only 12 cases of EEE were confirmed.

Similarly, most people who contract West Nile virus never know it. Of people infected, 80% never have any symptoms. Fewer than 1% of cases become serious, and even out of those, 9 of 10 survive. In the past four years, Massachusetts (with nearly 7 million people) has had more than 70 cases of West Nile, but only two deaths.

When we walk outside on a summer evening, it can feel like we’re mosquitoes’ favorite prey, but many species prefer nonhuman blood. Connecticut researchers tested more than 200 specimens of the northern house mosquito and more than 100 unbanded salt-marsh mosquitoes, and found that only two of the latter and one of the former had fed on humans. Out of 23 species of mosquito that they tested, 10 had not bitten humans at all. The species that preferred mammal blood fed mainly on deer.

Massachusetts is home to more than 50 species of mosquito, but most never or rarely bite humans, and most of those don’t carry EEE. The virus is found primarily among songbirds including robins, catbirds and such, and has little impact on their health. Black-tailed mosquitoes, the main vector spreading EEE, strongly prefer the blood of birds; 90% of them never bite anything else. And mammals are “dead-end” hosts for the virus: Mosquitoes cannot spread it from one infected mammal to others. A mosquito can spread EEE only if it bites an infected bird first, and us later. 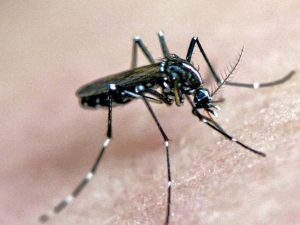 Tiger mosquitoes, which were firsat seen in the U.S. in 1985, feed during the daytime and can transmit West Nile virus, EEE and other diseases. frankieleon/via Flickr

One species that enthusiastically bites humans is the Asian tiger mosquito, first noticed in the U.S. in 1985. Perhaps not coincidentally, West Nile virus — which, unlike EEE, mosquitoes actually can transmit from one mammal to another — was first detected in the U.S. in 1999. While most mosquitoes aren’t active in full daylight, feeding mainly when we’re mostly inside, the tiger bites in the daytime when we’re outdoors. In various parts of the world, the tiger mosquito spreads not only West Nile and EEE, but also other diseases not generally found in the Northeast.

Also, the tiger mosquito is a “container breeder.” In nature, it breeds in small puddles in tree holes or leaves; but in developed areas, it happily uses discarded tires, puddles atop tarps, clogged gutters, neglected bird baths and other artificial water containers that we create.

While other species breed mostly in swamps with few humans around, the tiger feels right at home in our own yards and neighborhoods. If this sounds scary, remember that EEE and West Nile cases are still very rare and fatalities even rarer. And the good news is that you can do something about those breeding places around your home.

Insecticides can help control outbreaks of mosquito-borne viruses, but they have limitations. Aerial spraying is expensive: Massachusetts spent $4.8 million on it last summer, more than half in just two counties.

That doesn’t include the cost of ground-based spraying, or spending by local governments or private individuals. Spraying took place from dawn to dusk, mostly affecting nocturnal mosquitoes, but not so much for the diurnal tiger mosquito. And spraying kills more beneficial and other non-target organisms than the targeted mosquitoes. Spraying large natural areas should be strictly a last resort.

What can you do? After rain, eliminate pockets of water that might breed mosquitoes. Remove litter that holds water, from old tires to soup cans or plastic bags. Get your gutters cleaned. Mosquito larvae can only survive in stagnant water, so put a mini-fountain or similar device in your bird bath to keep the water moving, and maybe even replace your garden pond with a stream.

Protect habitat for mosquito-eating predators such as fish, dragonflies, bats and swallows. And apply insect repellents judiciously — as with all pesticides, more is often not better. Above all, don’t panic at the sight of a mosquito.

Joshua Rose is a naturalist who lives in Amherst. He is a Hitchcock Center member, a board member of the Hampshire Bird Club and a contributing editor of the website bugguide.net. He regularly leads programs for local nature-oriented groups.