Hunting groundwater in a frozen bog

I love the winter landscape. It’s stark, quiet, and reduced to its essence. And fieldwork in winter makes a scientist feel hearty and tough, like an explorer; discovering a known landscape anew.

I recently had a chance to experience this as part of a project to restore a natural wetland at the site of a retired cranberry bog. Our job was to map groundwater seepage by measuring surface temperatures throughout the bog.

This particular field expedition had to be conducted under very specific conditions that are hard to come by, and this was our third year trying. Ideal conditions for this work are the coldest and clearest of winter days, with no wind or precipitation, and no snow on the ground. We found our window in the first week of February, and headed to a retired cranberry farm in Plymouth in search of groundwater.

In winter, groundwater is warmer than the surface water, and the buoyancy of warmer water allows it to float to the surface. 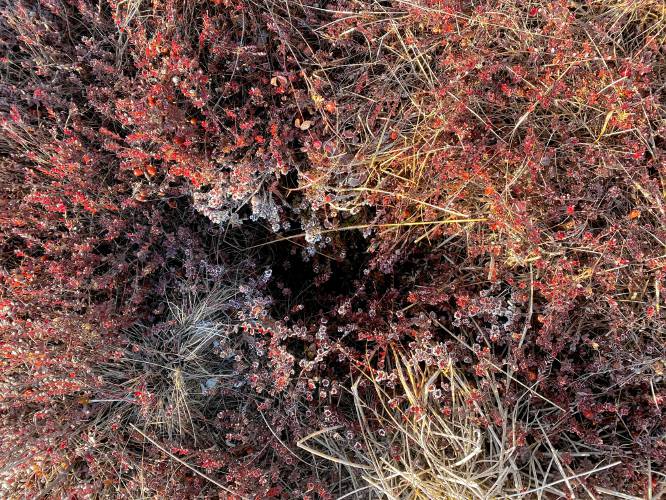 Vapor from warmer groundwater rising out of this hole in a retired cranberry bog in Plymouth, called a macropore, condensed and froze as droplets when it reached the surface. Christine Hatch

Some 10,000 years ago, with the glacial ice gone, depressions in the landscape filled with water. Over time, many also filled with decomposed plant material, known as peat. Some of these peatlands hosted native cranberries (Vaccinium macrocarpon), and where sand blew onto them, the plants were even more successful.

But after over 100 years of harvests, this cranberry farm — like many in Massachusetts — was facing increasing pressures from development, declining prices for berries and difficult terrain for farming, and the owner opted to go out of production in 2015.

Seeing an opportunity to restore the site to a freshwater wetland (without having to wait the centuries required for wetland soils to develop, as the seeds and soils are already present under the farmed surface), visionary leaders from Plymouth, the Massachusetts Division of Ecological Restoration and the Living Observatory partnered to fund the restoration and document the transformation to share the what we learn with future scientists and practitioners.

The first ingredient in a wetland is water, and here we expect that about half of it comes from the ground. By mapping where the water comes out, we can guide restoration actions on the ground to trap it, slow it down, and pond it on the surface to nurture wetland plants.

Groundwater pushes up through holes or cracks in the peat below that form where long plant stems once were, or where the underside of the peat layer is steeply curved. Since cranberry farming ended (and even before), the wetland has slowly begun to return on its own.

Unexpected holes appear in the once-farmed surface, filled with water. Temperature studies and analysis of water isotopes have confirmed that the source of these spring waters is groundwater. But the surface of the bog is difficult and slow to traverse, so mapping these locations by hand and happenstance is inefficient at best.

Instead, we took to the sky. An unmanned aerial sensor (a drone) outfitted with a thermal infrared camera can capture the “skin” temperature of the landscape below. But would the resolution be sufficient to spot spring pockets only 20 cm (less than 8 inches) wide and set deeply into the ground?

Groundwater temperatures average about 10C (50F) at this location, and we chose a day when air temperature was -5C (23F), but would we pick up the difference? Would the surface become iced over and obscure the springs? 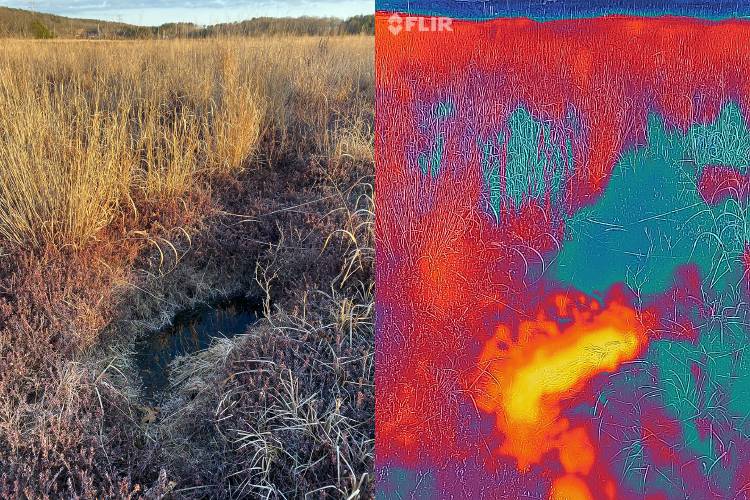 A photo of an area of a retired cranberry bog in Plymouth is seen next to a thermal infrared image of the same area, demonstrating warmer water in the pool. Christine Hatch

A team of students from a UMass unmanned aerial systems class had placed and surveyed targets the day before to improve the accuracy of the composite photo when the images got stitched together. Before dawn on flight day, UMassAir pilot Ryan Wicks started the protocols by the light of a brilliant full moon, and soon, the drone was airborne and headed for the far corner of the bog to begin mapping.

As it traversed the site, I peeked over his shoulder, and was thrilled to see bright blobs dotting the controller screen, some in places I knew springs existed, and others in new places!

While the drone zigzagged above, capturing springs from the air, I wandered around on foot (both to stave off the cold and to explore). With a handheld thermal camera, I photographed a few known springs, and marveled at the familiar unfamiliar landscape.

And then I saw it: a tiny hole, reaching deep into the ground, rimmed by delicate ice crystals: the water’s breath! Vapor from the warmer groundwater rising out of this hole, called a macropore, had condensed and frozen onto cranberry leaves when it reached the surface, leaving behind fleeting sculptural evidence of its presence.

This thermal groundwater map will make visible that which is invisible to our eyes, and will help guide how we’ll transform the land surface into an approximation of what it was like before people came along: a place where nutrients are transformed, carbon is stored, floods are pacified and the food web begins. These new technologies can be applied to research and restoration in Plymouth and beyond in order to preserve wetland landscapes for future generations.

Christine Hatch, Ph.D., is research-extension liaison for the Center for Agriculture, Food and the Environment, and extension associate professor of Water Resources and Climate Change in the Department of Geosciences at the University of Massachusetts Amherst. In her research, she uses temperature to track the movement of water in hydrogeologic systems.