Hurricane Irene: It wasn’t the wind, it was the water

“What are you going to do about the wall of water coming down the river?” The call still rings in the ears of Deerfield Select Board Chair Carolyn Ness. The sun was already shining, the storm had passed, people were out in kayaks — and yet a 30-foot-high wall of water, the accumulation of rain from all of the upstream watersheds, was on its way downriver. 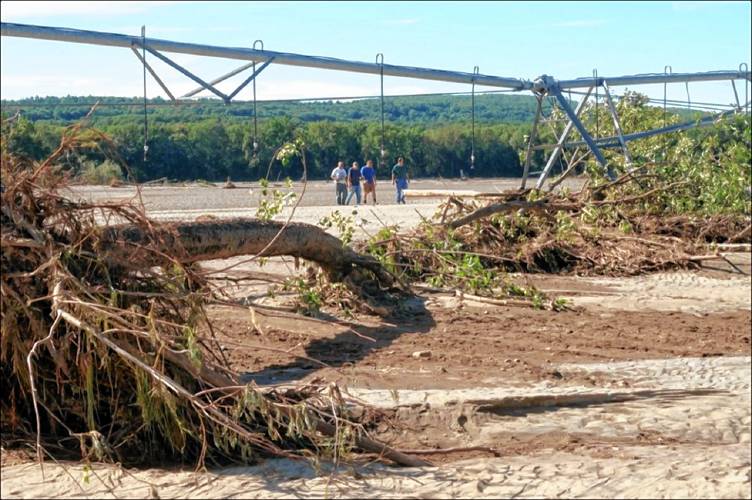 Many New Englanders, especially Vermonters, remember where they were on Aug. 28, 2011 when Hurricane Irene hit. Many lost everything that day. Some are still too traumatized to talk about it. “Tropical Storm” Irene’s official designation doesn’t do justice to what occurred in watersheds along the mid-Atlantic coast, Connecticut River Valley and tributaries: a catastrophic flood.

I flew in to Massachusetts only a day after the storm, wondering if the house I was purchasing would still be there or habitable (it was). Irene also determined my research future: Why had this storm been so damaging? Where were damages the worst? How could we prevent this kind of destruction in the future? Did climate change have anything to do with it?

Every time there’s a major hurricane, someone asks if this is proof of climate change. The answer is an unsatisfying yes and no. Imagine we have exactly 20 storms each year, and one is hurricane strength. Over decades, climate change has warmed the sea surface, which increases vorticity, or spin strength, of storms over the ocean. Climate change also warms the air, and warmer air holds more water. Together, these two factors increase the intensity of our 20 storms. While any one intense storm is not indicative of climate change, an increasing number of intense storms over time is. In a warmer world where all storms produce more rain, we may now have three hurricane-strength storms out of 20.

Adding more water more quickly to the land surface means rivers swell with storm flow faster than before, and are more prone to flooding. This impact is further exacerbated by land use. Impervious surfaces such as rooftops and pavement do not allow water to soak in, and instead convey it off as quickly as possible into our rivers. As our population continues to grow and we build more housing and roads, we can build our infrastructure with places for water to pool (like rain gardens and roadside swales), slow down and spread out, augmenting the land’s buffering capacity to mitigate these impacts. 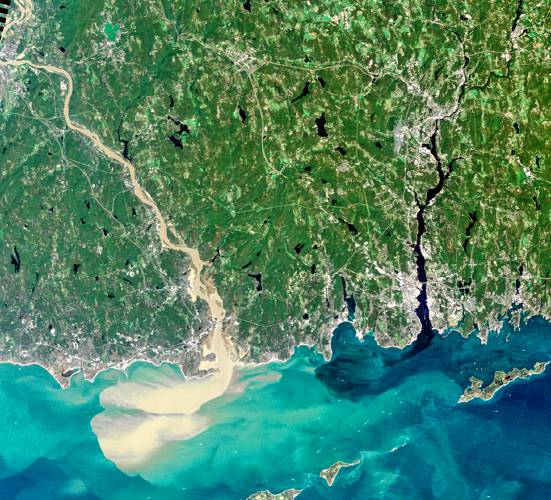 Extreme erosion generated by powerful floodwaters of Hurricane Irene throughout southern Vermont and western Massachusetts was carried into Long Island Sound by the Connecticut River. Photo by NASA Landsat satellite days after the storm. NASA Landsat

In Massachusetts, we have lots of rivers, and those rivers cross lots of roads. Each crossing was designed to accommodate a certain volume of water passing under it, by using about 100 years of streamflow records as a predictor. But there are shortcomings to this approach: Our records are too short, streamflows are changing (rainfall patterns are increasing in both intensity and total quantity in the Northeast), and so many of our outdated bridges and culverts are undersized and vulnerable to large flows. Although it’s difficult for towns to upgrade crossings to handle larger flows, they can make a careful inventory of vulnerable structures and plan well ahead of time so that they can apply for state funds, or for federal funds in the event of a failure.

Why was Irene so damaging? One reason was that many who had been preparing for it a week in advance were told to expect high winds, not flooding. Irene was simply a really big storm, capable of reshaping entire valley floors. While true, this is still a somewhat unsatisfying answer: In Massachusetts and Vermont storm totals were 8 to 10 inches of rain in a few places — large, but not so huge as to produce this level of destruction. Irene mobilized huge amounts of sediment, as anyone in the White River watershed in Vermont or in South Deerfield can attest (all of the topsoil was ripped from one farm, and up to two meters of sand and a substantial crop of melon-sized boulders were left in its place). Erosion was clearly visible from space as a sediment plume entering Long Island Sound days after the storm. Was Irene a harbinger of what our future climate looks like? Perhaps not, as most estimates put the likelihood of an Irene-sized event at a third to a tenth of one percent in any one place. But it’s likely that a storm of this magnitude will occur somewhere in New England every year.

Is it possible that some prior condition “primed the system”?

August 2011 was an unusually wet month in Massachusetts: We had several 4 to 6-inch rainstorms in the weeks preceding Irene. Soils were completely saturated and groundwater levels in wells were also higher than in the previous 10 years or so. Before Irene, there was almost no more ability of the ground to absorb water, and no place to store it even if it could. So almost all of Irene’s intense rains poured straight off the hillsides and into the rivers. Hard infrastructure such as walls and riprap along river banks prevented flood water from accessing plant-rich floodplains with abundant absorbent organic soil. 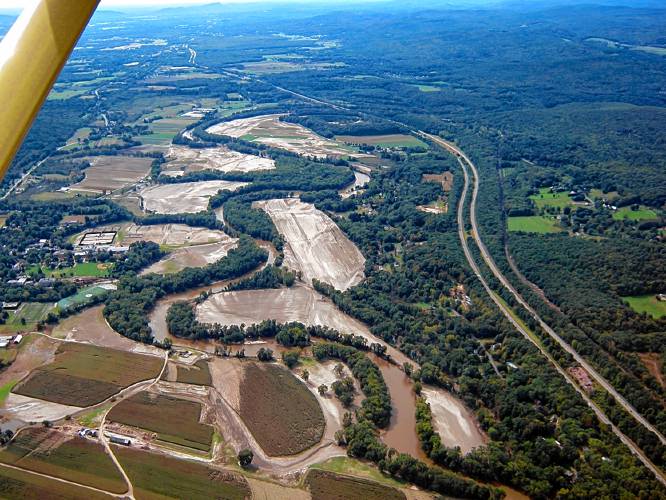 Armed with powerful floodwaters accumulated in the upper watershed, Hurricane Irene tore away much of the topsoil and deposited up to two meters of sediment on South Deerfield farms on its floodplain before entering the Connecticut River. Route 91 can be seen on the right, and Route 5 & 10, and Deerfield Academy, where sports fields were also flooded, are on the left. Massachusetts Geological Survey/Chris Condit and John Fellows

Irene’s flood wave (30 feet high by the time it reached the South Deerfield floodplain) had massive erosive power that carved away river beds and banks, and even roads and homes along the way, as it re-formed channels into new shapes, especially in smaller, steeper watersheds.

Most flood-preparedness information is based on large population centers and inundation (imagine a tranquil bathtub filling), but not this kind of powerful erosion (think high-pressure fire hose coupled with sandblaster filled with large rocks). So many places, even some on relatively high ground considered safe, were very vulnerable.

Vermont has recognized the dangers posed by erosion during floods, and is working to move people and infrastructure farther from the rivers.

If we give our rivers more room to be rivers (moving, changing and evolving through time), allowing them to connect to their floodplains (with vibrant riparian and wetland habitat, as well as flood-wave buffering), we will gain both flood-resilient communities and healthier river ecosystems at the same time.

Christine Hatch is research-extension liaison for the Center for Agriculture, Food and the Environment, and extension associate professor of water resources and climate change in the Department of Geosciences at the University of Massachusetts, Amherst. She is a leader of the RiverSmart Communities project, supporting ecologically restorative flood prevention and remediation in New England.