Invading the meadowlands of the Connecticut Valley

While researching the natural history of our Valley on a spring day some years ago, I happened to be complaining about that noxious invasive, Japanese knotweed, to my dear late friend Elizabeth Farnsworth, who told me that I could not write about invasive plants without writing about natives as well. This led to an argument about what the first invasives were after Colonial settlement and whether one could imagine a purely native vegetative state (pun intended).

In her research, Farnsworth posited a pre-Colonial landscape of 66 percent forested land while 34 percent of the land was divided into seven other habitats — chiefly shrub wetlands, bogs, beaver meadows and wet meadows. I then tried to piece together an image of the most valuable habitat in the eyes of the invading English Colonists, who prized the wet meadows above all because they provided fodder for livestock, the most valuable of colonial possessions.

Meadowlands, which were regularly flooded during springtime, were equally valuable to native people who used reeds, rushes and sweetgrass (Hierochloe) for basketry, mats and building materials. Plants such as blue flag (Iris versicolor), cattail (Typha latifolia), and pickerel weed (Pontederia cordata) were part of their diet. All the major native villages of the Pioneer Valley were near meadows — Agawam (Springfield), Woronoco (Westfield), Nonotuck (Northampton and Hadley), Capawonk (Hatfield) and Pocumtuck (Deerfield). Their corn hills were on slightly higher land adjacent to meadowland. 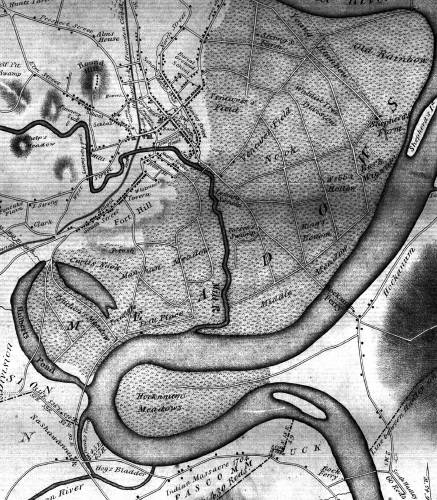 A map of Northampton from 1831, courtesy of the Forbes Library.

William Pynchon, founder of Springfield, came from Springfield, Essex County, England, northeast of London — a region noted for its meadowland, which contains a rich mix of some three dozen European plant species high in nutrition for livestock such as red fescue, knapweed and ox-eye daisy. For Pynchon, the meadowlands of the Pioneer Valley must have been a fair sight indeed.

We can visualize the intimate relationship between the town of Northampton and its meadowlands from an 1831 map of Northampton. Many 17th-century names still apply to the 21st-century landscape. You can find Old and Young Rainbow on the north with Venturer’s Field and Bark Wigwam adjacent to them. Then, moving south are King’s Bottom and Middle Meadow with Manhan Meadow to the southwest, bordered by Fish Place and Pynchon’s Meadow. On the south end are Hockanum Meadows (part of Hadley until 1840) and Hog’s Bladder.

By guesswork and from the amazing trove of facts and insights left to us by Sylvester Judd, that most intrepid of 19th-century diarists and journalists, Farnsworth and I pieced together a picture of the transformation of the meadows. The earliest English settlers in eastern Massachusetts had already discovered that native American grasses, reeds and rushes were far inferior to English meadow grasses for forage and hay. Judd mentions several species of native plants such as thatch grass (Andropogon), sedges (Carex), mannagrass (Glyceria), and various well-loved New England flowers such as Joe Pye weed, asters, cardinal flower and bulrush. However, these plants were so lacking in nutrition that farmers in the mid-17th century were unable to keep their livestock in good condition, so they often resorted to slaughtering some of them in the fall.

By the time the Connecticut Yankees settled Northampton in 1654, they probably knew they had to transform the meadows from mostly native to mostly English forage and hay crops such as timothy (herdsgrass) and fescue. Other more modern types of fodder such as alfalfa and European clover were introduced later. To accomplish this, Colonists had to ditch, dike and divert streams to keep the meadows from flooding during the late spring and summer months.

The English then had to replace native plants with ones from Europe. English hayseed had become available by the middle of the 17th century, and William Pynchon’s son John was buying and selling it by the bushel as early as 1655. Within the first two generations of settlement, certainly by 1700, the meadows were no longer recognizable as native wet meadows. In the 18th century, with the importation of new crops, they resembled the meadows of Europe.

The first intentional introduction of non-native plants in the Colonial era transformed the meadowlands of the Northeast. It certainly wouldn’t be the last invasion, but this first one has escaped our notice because succeeding generations of immigrants found the newly planted fields so useful, so “natural.”

We all seem to have adapted to these new meadows, even the grasshopper sparrows and bobolinks. Native Americans, however, paid a steep price for this transformation. Not only were native plants edged out, but the English took Indian lands, and Native Americans themselves dispersed mostly northward, many making their way to Canada. On the other hand, don’t underestimate the resilience of native people or native biota. The Abenaki, Nipmuk and Pequot remain here, part of our fabric and still the foundation of our landscapes. The extirpated beaver, deer and bear have returned, and native plants still dominate the beaver ponds. Look to such Abenaki authors as Marge Bruchac and Lisa Brooks to find out more.

John Sinton is adjunct professor of landscape architecture and regional planning at the University of Massachusetts, Amherst. He is a co-moderator of the citizens’ group the Mill River Greenway Initiative and an honorary board member of the Connecticut River Conservancy. Sinton is also the author of a history of the Mill River, “Devil’s Den to Lickingwater: The Mill River Through Landscape and History,” to be published by Levellers Press in October. This column is dedicated to the memory of Elizabeth Farnsworth, who died last October. Read some appreciations of Elizabeth from her Hitchcock Center friends.