IPM works with the ecosystem — not against it

By Michael Dover for the Gazette

“Integrated” refers both to using a variety of methods to deal with a pest problem, and to considering the pest as part of an ecosystem — an interdependent system of species.

Here’s an example of using IPM to control a single pest, the European red mite. This tiny creature can cause severe losses in apple orchards. It also has a history of rapidly developing resistance to conventional chemical pesticides, so relying solely on those chemicals is a losing proposition. But a mixed approach, involving a predatory mite species, oil sprays and pesticides (if necessary) can effectively protect orchards from this pest.

In some areas, growers can “inoculate” orchards with the predatory mites collected from orchards that have them, strewing small cuttings from trees in those orchards in the receiving orchards, where the predators will multiply and disperse, consuming quantities of red mites. Sometimes an early application of an oil spray will suppress the pest population until the predators take over. If the red mite population outstrips the predators’ ability to control them, a selective pesticide might be called for.

All of this requires knowledge of what’s in the orchard — pests and predators — and how many. Growers themselves or pest management “scouts” need to count mites on samples of tree leaves in order to make the right decision at the right time. 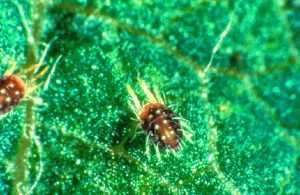 An adult female European red mite, about 0.4 mm in length, on an apple leaf. The mite, a major pest of apple and other fruit trees, can be controlled by predatory mites and, when needed, carefully timed use of pesticides. Purdue University Extension Service

This example demonstrates some of the basic principles of IPM: acceptable or “threshold” pest levels, preventive practices, monitoring, and relying on a range of control options.

Perhaps the biggest challenge in gaining producers’ acceptance of IPM has been the idea that, for many pests, there are tolerable levels that don’t require action. The pest population may not be numerous enough to cause damage, or a beneficial species — such as a predator — may keep the pest population from exploding. It may be that the weather isn’t conducive for the pest to reproduce and spread.

Any of these could be reason enough to wait until the situation warrants taking action, but it takes knowledge and skill to properly assess conditions and decide what, if anything, is needed.

There’s often a range of tactics for preventing pest damage or loss. Apples, for instance, come in many shapes, sizes, taste characteristics, and susceptibility or resistance to certain pests. The popular Red Delicious apple is one of the most pest-susceptible varieties around. Growing a resistant variety instead can reduce or eliminate the need for any other control.

Liberty apples, for instance, are equally tasty while also being resistant to apple scab disease. There are also so-called cultural and mechanical controls, such as fencing, mulching, netting and ways of cultivating that can prevent pests from coming into contact with the crop. At our small farm, we plant tomatoes that are susceptible to late blight in a hoop house. There we can use drip or soak-hose irrigation to prevent water droplets from getting on leaf surfaces, which is where late blight develops and kills the plants. Outside the hoop house we plant resistant varieties.

Monitoring takes many forms in IPM. Scouting involves regularly going out into the field or orchard and looking to see what species are present and in what numbers. It can include using traps such as sticky red balls that mimic ripe apples and attract the destructive apple maggot fly, or pheromones (natural sex attractants) that draw males of various insect species to traps.

Traps can provide estimates of the size of the pest population. For many plant diseases, monitoring takes the form of gathering weather data and using models to predict whether or when certain pathogens will become problematic. These techniques can reduce pesticide use if the producer knows when it’s necessary and when it’s not.

IPM often employs more than one control method, but sometimes the strategy involves timing and monitoring to deploy a single method, such as a pesticide. It can also preclude using chemical pesticides; the IPM approach works in organic operations as well as in conventional ones.

The key is understanding the whole system. Managing a system rather than tweaking its individual parts may be challenging, but the benefits in human health and environmental quality are worth it.

Michael Dover is a retired environmental scientist and a former Hitchcock Center board member.