It’s not easy being evergreen 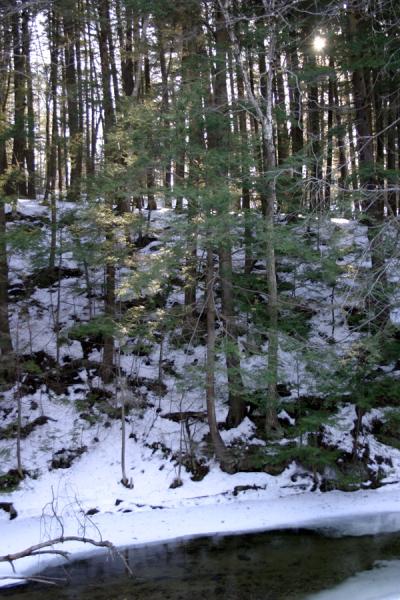 Evergreen trees by a snowy brook PHOTO BY REBECCA REID

As the cold temperatures and snows of winter approach I treasure those of our plants that stay green into December and through the winter: trailing arbutus, maidenhair spleenwort, checkerberry, wolf’s claw clubmoss, marginal wood fern, partridge berry, downy rattlesnake plantain, climbing fern and others. There are quite a number when you go out searching.

Planted in terrariums and gathered for holiday decorations, their appeal seems universal for those who spend time in the forest during these darkening weeks — symbols of our hopes and expectations for returning light, warmth and growth. How I appreciate the myriad grays and browns of winter enlivened by the greens of pine, hemlock, spruce and fir, and the laurel thickets holding their green all through the cold months.

Why do these plants stay green all winter? I once thought they remained green to take advantage of certain winter days, when temperatures are not too cold, to carry out limited photosynthesis. I also assumed that the advantages of doing this outweighed the challenges of maintaining physiological integrity in the face of conditions that drive most of our plants into a four- to five-month dormancy. However, plant ecologists have found that other factors are at work instead.

As Peter Marchand describes in his fascinating book “North Woods,” photosynthesis in our northern conifers generally stops with the end of active growth and the onset of cold weather in the fall. Throughout the winter the chloroplasts, organs that hold the chlorophyll and are responsible for photosynthesis, are clumped together and inactive. No starch grains are present, which would indicate photosynthetic activity. Plant physiologists have found no evidence that these processes can get organized during brief winter thaws.

But they have found signs of photosynthetic activity as early as mid-March, which confers some advantage over deciduous trees that must wait another two months before unfurling their leaves.

Marchand explains that evergreen-ness helps these plants in another important way. In northern forests, soil nutrients are generally less available for plants to take up than in other environments. Cold temperatures significantly slow the rate of decomposition of organic materials. Additionally, soils in these environments are often highly acidic, which means poorer conditions for nutrient absorption. Deciduous trees lose a lot of carefully gathered nutrients each autumn during leaf drop.

Evergreens have leaf life spans of up to four years, thus retaining the nutrients assembled in their leaves for significantly longer periods. Another conservation measure may be seen in the fact that, while they are kept longer, overall nutrient concentrations invested in mature evergreen tree leaves are generally lower than in deciduous leaves. Thus, the evergreens lose less when their needles or leaves eventually drop.

As with all plants, evergreens seek to create growing conditions that favor themselves and their offspring. For instance, evergreen leaves and needles generally have higher carbon-nitrogen ratios than their deciduous counterparts. When these leaves and needles decompose they create highly acidic soil environments with lower nitrogen content, which is advantageous for those species conserve nutrients better. In addition, the winter shelter provided by existing evergreen plants can make it easier for younger evergreen plants to survive the cold.

However, the longer life span of individual leaves entails risks. These species are more susceptible to air pollution, including ash and toxic chemicals. These are more injurious to evergreen plants because the longer life of individual leaves exposes them to greater potential damage over time. Thus when these leaves and needles are exposed to toxins, the effects on the tree’s health can be significant. Longer leaf life spans also mean increased risk to the plant from herbivores and leaf diseases.

This season, get out and search for evergreens. Where do they grow? Do they prefer acid or more neutral soil environments?

How many species can you identify? Practice distinguishing spruce from fir and white pine from red or pitch pine. If you collect any plants for indoor decoration, collect only in areas where it is permitted and take only a small number of individual plants from each stand, leaving the majority to carry on through cold weather to warm again.

Learn to identify the species and please do not collect any that are endangered or rare. Take time to appreciate the resilience and miracle of our hardy evergreen plants during these dark, cold months.

Ted Watt is an environmental educator/naturalist at the Hitchcock Center for the Environment.