Jacks, jills and joeys: A passel of ‘possums aka tick ‘hoovers’

With scraggly fur, a long, rat-like tail, a pointy snout, and a large mouthful of teeth (50 to be precise), opossums are more likely to inspire fear or disgust than praise. However, this unique North American marsupial is a relatively harmless scavenger and a friend to gardeners through its consumption of snails, slugs and beetles. 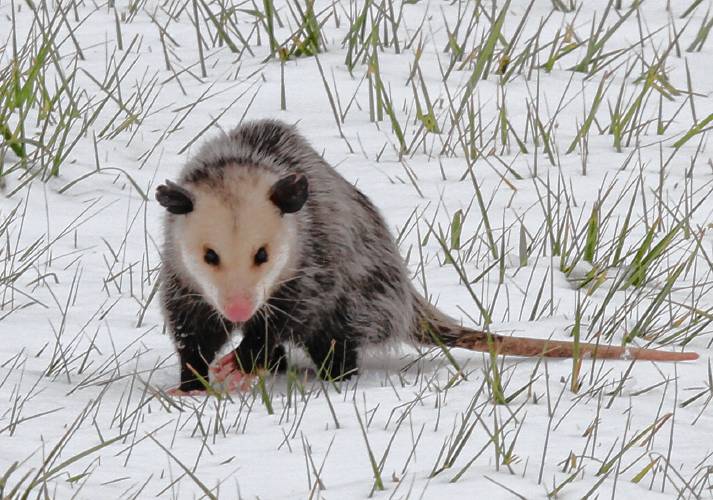 Opossums also are resistant to rabies, rarely transmit diseases to humans, and their excellent grooming habits do an amazingly successful job of killing the ticks that carry Lyme and other diseases. (One researcher described them as the “hoovers” of the tick world.)

Opossums originated in South America. Of the 103 species in the Western Hemisphere (including such intriguingly named species as the bare-tailed woolly opossum, the Olrog’s four-eyed opossum and the white-bellied woolly mouse opossum), only one — the less-excitingly named Virginia opossum — migrated all the way into North America during the Great American Interchange when Panama formed, linking North and South America.

Originally arriving from Central America approximately 3 million years ago, the opossum continues to expand its range northward into Ontario and westward into South Dakota and Nebraska. And, although it is somewhat challenging to most modern palates to consider the opossum a desirable food source, it was most likely intentionally introduced to the western U.S. as such during the Great Depression; its western range has since expanded northward into Canada.

The word “opossum” (also commonly referred to as “possum”) derives from the Algonquian “wapathemwa,” meaning “white animal.” In 1608, John Smith of the Jamestown colony noted that “An Opassom hath an head like a Swine, and a taile like a Rat, and is of the bignes of a Cat. Under her belly she hath a bagge, wherein she lodgeth, carrieth, and sucketh her young.”

The female Virginia opossum (Didelphis virginiana), like all marsupials, has two wombs, or, more precisely, a divided uterus. (Didelphis is from the Ancient Greek “di,” meaning “two” and “delphis” meaning “womb.”) Referred to as a “jill” (the male being a “jack”), the female also has a bifurcated vagina and a pouch called marsupium. The 13 nipples in the pouch are arranged in a circle of 12, like a clock, with one in the middle. 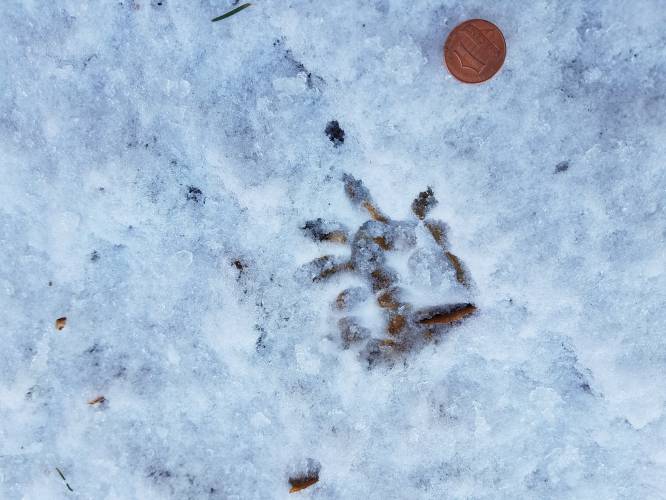 Opossums are among the easiest animals to track, as their opposable “thumbs” on the rear feet leave a distinctive starlike track (shown at left) in mud or snow.

After a gestation of period of less than two weeks, the jelly-bean-sized opossum babies (called joeys, like their distant kangaroo cousins) make their way to the marsupium, where they live for up to three months. The “passel” of young opossums then climb onto the mother’s back, clutching onto her fur, in what appears to be a highly uncomfortable situation all around, and eventually they strike out on their own after a month or two.

The opossum’s bare, prehensile tail is used for balancing, grasping and carrying items such as nest materials. Contrary to popular belief, adult opossums generally do not hang from tree branches by their tails, although juvenile opossums occasionally do. Nocturnal, solitary and nomadic, opossums tend to roam far and wide unless food and water are easily available, generally sleeping in the abandoned dens or burrows of other animals during the day. Although opossums, being excellent climbers, prefer wooded areas, they are also attracted to the scavenging opportunities afforded by more urban environments.

When threatened, opossums will first growl or hiss in defense. Although the long snout and large mouthful of teeth can be intimidating, if the threat continues they will involuntarily “play possum” instead of attacking. In this strange state, the lips pull back in an alarming grimace, revealing bared teeth and foamy saliva. The anal gland emits a green, malodorous liquid, driving away predators, and the heart rate drops in half (although the brain remains fully conscious). In this state, the animal remains unresponsive to most normal stimuli (including being carried away), only returning to normal after the danger has passed.

Opossums consume a wide variety of almost anything they can scavenge or hunt (including trash, pet food, slugs, snails and rodents). Their unusually high need for calcium unfortunately sometimes leads to their own demise, as they often scavenge the skeletons of roadkill by the side of the road, inadvertently becoming roadkill themselves in the process.

Opossums are among the easiest animals to track, as their opposable “thumbs” on the rear feet, which aid in climbing, leave a distinctive starlike track in mud or snow. Opossum tracks can be found not only in woodlands but in farms, fields and in urban areas near trash dumps or other places where food or shelter is easily found. The next time you are out walking in the mud or snow, keep an eye out for signs of these strange and unique creatures, our only native marsupial.

Reeve Gutsell is a volunteer at the Hitchcock Center for the Environment. She has a master’s degree in resource management and conservation from Antioch University, and an master’s of fine arts in Creative Writing from Naropa University. She enjoys spending as much time as possible exploring the Pioneer Valley.