Learning how to listen to what the birds have to say 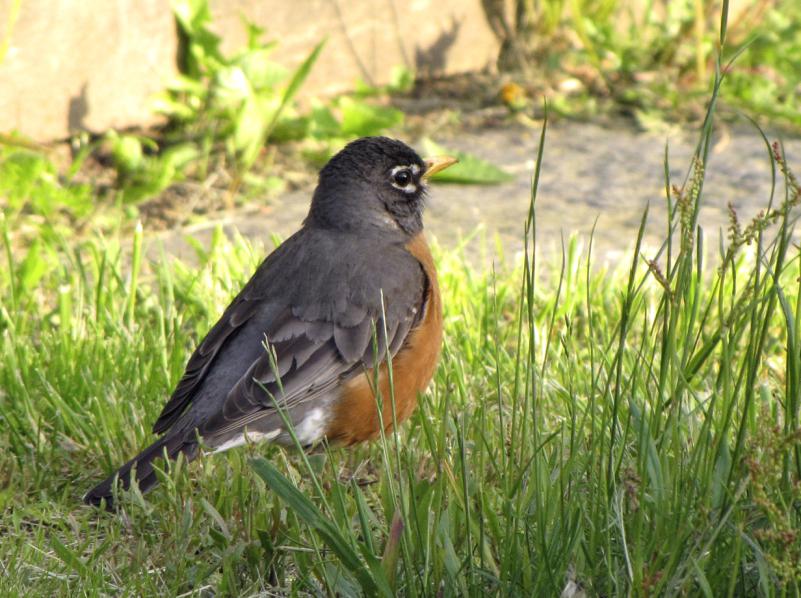 Rebecca Reid Robins are an excellent bird-language bird to watch. They have some of the most complex yet recognizable vocalizations among our backyard birds.

Early in May, I attended the New England Bird Language Intensive, a five-day workshop put on by White Pine Programs in Maine. Birds are a passion of mine and I enjoy birding “by ear,” so it was appealing to learn about bird songs and calls more deeply.

The program took place on a farm in Cape Neddick, where I joined about 30 other self-proclaimed “bird nerds.” Our days began at 5 a.m., before sunup. We gathered and walked out to our “sit spots” — places we had chosen in a field, where we sat quietly and observed the birds around us.

We were listening for the nuances of the bird sounds we were hearing. For example, a chickadee — was it singing its fee-bee song, or was it the alarm call dee-dee-dee? Or the tseet contact call with its neighbors?

We recorded what we heard in our notebooks, as well as the direction from which we heard it. Afterward, at breakfast, we sat with our small “clans” and compared notes. We discussed which vocalizations we were hearing.

These mapping sessions were followed by hikes, games, lectures and stories.

A prime example of bird language happened during the last morning’s sit. The song sparrows, chickadees and nuthatches were singing their hearts out. Then all of a sudden, silence. A northern harrier, also known as a marsh hawk, had flown overhead and started circling. In response, in survival mode, the songbirds immediately stopped singing. Some of them probably dropped lower in the trees to stay safe.

When my friends and family back home have asked me what bird language is, I’ve found it hard to describe. My clan-mate Flavia told me, “Here’s what I say. Imagine every time you open your fridge, or any time you walk out your front door, you’re subject to predation.” Birds are incredibly sensitive indicators of threats in their habitats. They have no choice — there are predators everywhere, hawks from the sky and cats from the ground. Weasels and snakes can climb trees and prey on nestlings or eggs. Accipiters such as Cooper’s hawks can swoop in and catch a bird at a bird feeder. They can’t let their guard down for a moment, whether they’re building a nest, foraging, or flying from place to place. Birds can’t afford to waste a second when a predator is coming. They have to be sharp. Songbirds have complex syrinxes, or voice boxes, and can make many nuanced vocalizations. We can learn what those vocalizations sound like and interpret them.

One of the most powerful demonstrations during the program was when we went out into the forest with some audio recordings. First we were taught that robins have a specific call they make when there is an aerial predator overhead — a very high-pitched, thin-sounding eeeeeeee. Other birds and animals are well aware of this.

The forest all around us was what we call “baseline,” that is, birds were calling and singing, relaxed and going about their business, threat-free. Then, one of the instructors played a recording of the robin’s aerial predator alarm call. All the birds in the forest instantly stopped. As far as they knew, a raptor was overhead. It was bird language in action. We marveled for a moment.

We continued on through the woods, and what should we find but a hermit thrush, perched on a prominent branch right alongside the trail, motionless. Why in the world isn’t it flying away? I asked myself. The hermit thrush is a very secretive bird, hard to spot and very skittish. It’s hard to get close to them, and there’s no way they’d stay there as you approached. Yet here it was, allowing 30 humans to gawk at it!

Either way it was stressful, but one of the choices was life-threatening and one wasn’t. So it stayed put and we all got a close look. We gave our thanks, and apologies to the hermit thrush and moved on.

This is just the tip of the iceberg in bird language. By paying a little more attention, people can know just as much as the birds about what’s going on in the forest. Whether it’s for practical applications such as hunting, or for the sheer appreciation of knowing what it takes to survive as a bird, bird language is a great way to go deeper with your awareness of nature.

Katie Koerten is an environmental educator at the Hitchcock Center for the Environment. The episode described here was the only time the instructors used recordings to demonstrate the effects of bird language, and it was strictly for educational purposes. Instructors and students all understood and respected the energy birds need to survive; recordings like the one used in the course can cause them to use up precious energy responding. None of the participants feels comfortable playing recordings to elicit responses from birds in the wild and do not recommend using them in any other circumstances. For more information about White Pine Programs, visitwww.whitepineprograms.org.