We’ve all seen moths swirling around a light on a warm night, so familiar that we have the saying, “like a moth to a flame.” That sight is less common than it used to be. In many places, insects of all kinds are less common: populations are impacted by habitat destruction, lawn chemicals, traffic, exotic species and climate change. Also, individual lights become less attractive to insects as light pollution weakens their visibility. 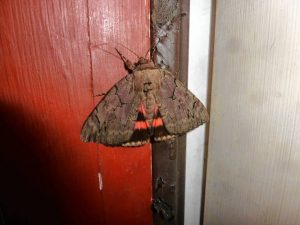 When frightened, an underwing moth will spread its forewings to display their boldly patterned hindwings, thought to startle predators, allowing the moth an extra moment to escape. Most underwings fly in the late summer and early fall. COURTESY OF JOSHUA ROSE

Scientists have never completely explained insects’ attraction to light. Many insects, including moths and also bees, can see wavelengths invisible to our eyes, such as ultraviolet (UV) light. As a result, many flowers have evolved UV-reflecting patterns to attract pollinators’ attention. Hypotheses to explain why moths gather around lights include their mistaking lights for food sources; moths’ navigation, adapted to the moon and stars, being disoriented by unnatural lights; or lights confusing insects’ ability to find mates or avoid predators. Different insects respond especially to different light wavelengths, and some almost never approach lights at all, so the answer may differ among species.

In the early 1900s, entomologist William Herms tested insects’ attraction to different light wavelengths, and found that most were drawn to the blue-to-violet end of the visible spectrum. Subsequent work found that UV light (also called “black” light) was even more effective. That eventually led to bug zappers. These devices were marketed for decades as a means of controlling mosquitoes and other flying pests, until research showed that harmless or even beneficial species were being killed in greater numbers than pests.

But some people go shopping for lights that attract more insects. UV light is gaining popularity among people who study rather than kill insects. “Black-lighting” for moths and other insects, formerly practiced mainly by entomologists and collectors, is becoming increasingly popular among nature lovers and environmental educators. This led in 2012 to the first annual National Moth Week, which now incorporates events in every state in the U.S. and over 80 countries.

One of Massachusetts’ ambassadors to the moth world is Dave Small. In 2009, well before the first National Moth Week, he hosted his first “Moth Ball” in his backyard. He made it an annual event, inviting the Athol Bird & Nature Club and others to spend the night (often the entire night) looking at insects in his yard. Entomologists and enthusiasts come every year like moths to… you know. The list of moth species documented in Small’s yard to date is over 950; he and his friends often identify 100 or more in a single night. Some Moth Ball participants recently founded the New England Entomological Society, which conducts similar insect-lighting events and occasional daytime forays around the region.

The moth species that appear at a light vary by year. When gypsy moth or winter moth populations boom, controlling them with insecticides can also kill off native species. On the other hand, if these invaders are allowed to rampage unchecked, their defoliation of trees and shrubs can leave many native caterpillars without food.

Moth diversity also varies by month. In early spring, the sallow moths are often the first to be noticed; most species are subtly colored, but a few, such as Comstock’s sallow moth, have beautiful green patterns resembling lichens. When nights warm up in May, moth diversity becomes dizzying, including several species of sphinx moths or hawk-moths. The Moth Ball happens in June because that’s peak season for the largest moths, the giant silkworms, including the famous Luna moth and its lesser-known cousins the Cecropia, Promethea and Polyphemus moths. These titans’ numbers dwindle through midsummer, but then the underwing moths emerge, some of whom are also impressively large; their name refers to most of their having hindwings that sport brilliant colors or striking patterns, which are concealed under subtly marked, tree-bark-colored forewings and revealed when the moth is flying or agitated.

Lastly, moth diversity varies by the lure used. A mercury vapor (MV) bulb, emitting intense light across a broad array of wavelengths, can attract the most species. However, MV lights are more expensive, harder to find, hot enough to pose a fire risk, and bright enough to endanger eyesight. UV lights attract nearly as many species, and are safer and more obtainable. While large, stationary UV lights attract flying insects, hand-held UV flashlights can be used to find caterpillars that fluoresce in black-light, like scorpions do farther south. Many moth enthusiasts also use bait that can attract species that rarely appear at lights. Most moth bait recipes include assorted fruit, alcohol (often stale beer), and brown sugar or molasses. More specialized commercial baits involve pheromones; one of these attracts the family Sesiidae, colorful day-flying moths, some of which are shockingly convincing mimics of yellowjackets or other wasps.

National Moth Week takes place during the last week of July, so for this year, it’s over. Nonetheless, colorful and interesting moths of many species will still be flying for months. And there’s plenty of time to shop for lights before next summer.