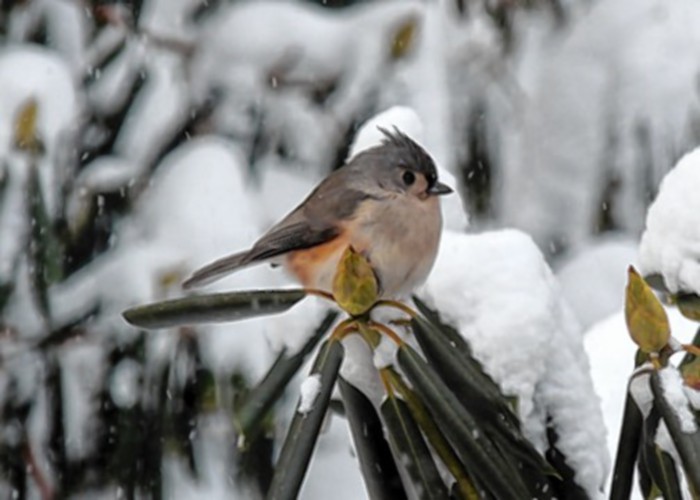 I’ve been birding in Massachusetts for quite a while. I remember in the 1960s noticing more mockingbirds, cardinals and tufted titmice during the winter as one year flowed into the next. “Why are these southern birds coming to New England?” I would occasionally ask myself.

Some people thought it was because more people were feeding birds so the songbirds could survive the winter better with a ready food supply. Others contended that the increase in fruit-bearing shrubs, both planted natives and proliferating non-natives, was the reason. Or perhaps it was regrowth of the native New England forest habitats as formerly cleared land returned to forest. I listened to those explanations and wondered.

I have a distinct memory of a time when climate change became a full media event. I followed the statements, reports and broadcasts, and one day it just hit me: Oh, yeah — these birds know that our climate is warming and that’s why these southern species are staying north during our winters. Now they can cope in our climate, with its warmer temperatures, decreased snowfall and other conditions.

No one ever said in so many words, ”Yes, birds know and they are telling us about the climatic changes in our area.” I just intuitively put these two items of naturalist knowledge together. Birds, perhaps the most mobile of all our natural residents, are sensing environmental changes and adjusting their behaviors accordingly.

Alas, I have not been recording the spring migration arrival dates of neo-tropical migrants over these 40 years. These dates are reputed to be shifting in response to a variety of environmental changes in our area. Nor have I been noting when I last see various migrating species in the fall. Looking back, I wish I had been a more meticulous observer and note-taker.

However, there exists a wonderfully complete data set, providing rich information about December bird sightings in North America: the National Audubon Society’s Christmas Bird Count, or CBC. Since 1900, local groups of birders have joined together to search out and record species seen during a 24-hour period in late December.

In addition to listing the different species they observe, they also record the number of individuals of these species. All the data since the counts began are available online. You can search the database for your chosen species in specific geographical areas over a given set of years and a data table and graph appear almost instantly on your computer screen. These data presentations provide rich opportunities to observe trends and think about the causes.

I have searched the CBC database for Massachusetts records of a number of formerly southern — but now permanent resident — species, including northern cardinal, tufted titmouse, Carolina wren and red-bellied woodpecker.

The graphs of sightings of these four species show a distinct shape in their population curves. They all start out with low population numbers in the early 1900s and remain low through mid-century. Then each species increases its numbers at a surprising rate. The years when the population increase starts vary with the species. And this is correlated in my naturalist mind with the tolerances and food requirements of each individual species.

For instance, perhaps one species has a greater tolerance for winter cold than others whose population spiked later. Maybe certain insect prey species ranged farther north prior to the arrival of their predator songbird. Or maybe seed-bearing plants bore more edible seeds enabling increased seed-eating bird populations in the north? There are so many possible factors that can all interact.

For the sake of comparison, I checked black-capped chickadee, white-throated sparrow and dark-eyed junco population numbers over these same years. These are not southern species — if anything they are more northerly species already adapted to our winter conditions. Unlike the four “southern” species, these graphs show year-to-year variations, but no upward curve.

Of course, there are many factors that affect our wintering songbird populations. But the data show that climate warming is the most likely explanation for the dramatic increase in the numbers of formerly southern bird species here in Massachusetts. The birds knew this long before we figured it out!

Ted Watt is an educator/naturalist at the Hitchcock Center for the Environment. The Christmas Bird Count is conducted every year under the auspices of the National Audubon Society by a great number of volunteers.

If you are curious to see the numbers and graphs described in this column, go to the link above, click on “Access Count Results,” and enter the required fields. Ted leads the Hitchcock Center’s Nature All Year Study Club, which focuses on understanding the diversity of life and the yearly calendar of what biological events happen when. To join this program or for more information, call the Center at 256-6006.