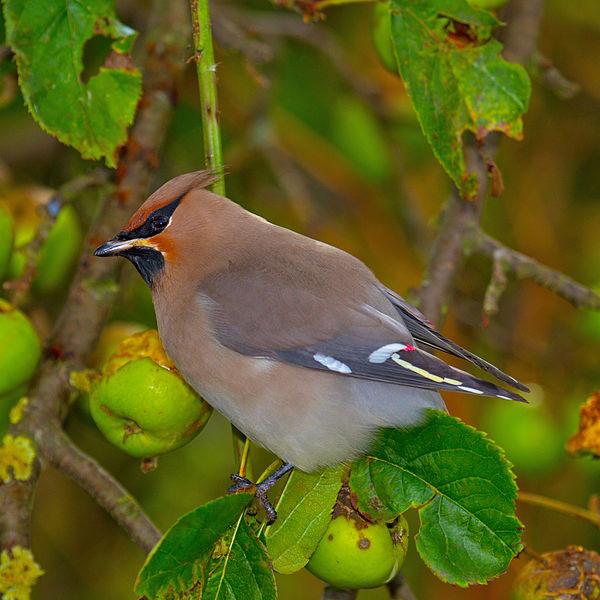 A few winters ago, a drama unfolded outside my door that highlighted the conflict that can happen when migratory species and year-round residents (“settled” species) compete for the same resource. A Northern mockingbird, a settled species, was confronted with a flock of migratory Bohemian waxwings, which occasionally visit our area from the north.

Mockingbirds defend territories that provide enough food to last until spring. They primarily eat fruit and seem to thrive on invasive oriental bittersweet. Search any tangle of these vines filled with bright orange berries and you’ll probably scare up the resident mockingbird. They also love crab apples and each winter one mockingbird guards the trees by my house. Virtually every spot with enough food is taken up by one of these birds.

That winter, thousands of Bohemian waxwings appeared in New England. A flock of 100 or so showed up hungry for the crab apples near my house. Our local mockingbird flew into action, defending its territory. Darting back and forth at every waxwing that dared enter his turf, he kept them at bay for over a month until they either gave up or headed back north. The sad part (for me) was that there happened to be such a huge overabundance of crab apples that year that the darned mockingbird couldn’t even eat a fraction of them! By spring they hung blackening with rot on the trees. Luckily by then, the mocker became busy with thoughts of mating and relaxed his guard a bit allowing our resident waxwings, the cedar waxwings, to clean up the mess.

Both migratory and settled species have evolved over time, offering benefits and presenting difficulties for each, and leading to struggles between them. A nomadic lifestyle enables a species to move around to find new places with new resources and food, and thus avoid droughts, floods, frigid temperature or fire. These animals can take advantage of seasonal food sources and breeding locations in places that are inhospitable at other times of the year. But migration is also risky. The journey can be long and arduous, and the animals arrive in their new locations without prior knowledge of what transpired in their absence. Has the snow melted? Will they find a source of food? Did a fire destroy their habitat? Or are there other beings there — dangerous predators or aggressive competitors? Still, a huge variety of animals continue to migrate, from monarch butterflies to blue whales and, of course, a great many birds.

Staying put can also be difficult. To survive the winter, settled species must have a strategy to ensure their food supply. Every squirrel has its caches of nuts. Each fox marks its territory for hunting. Each beaver family has its pond. Mockingbirds stake out their fruit trees and berry vines.

What happens when these two lifestyles collide? Struggles like the one between my mockingbird and the waxwings have always occurred. Here’s another example: Passenger pigeons used to blanket the sky for days on end as they roamed the forests of eastern North America in search of acorn crops. As oak trees don’t produce nuts every year, the migratory lifestyle proved extremely successful for these birds. When one area was bare, they found another where the trees were producing that year. How did the squirrels cope when the passenger pigeons arrived by the tens of millions? I’m sure some lost their food and starved to death. Others survived through luck or more effective hiding places for their winter’s supply.

Humans present challenges for both nomadic and settled species. In prehistoric times, our ancestors were usually nomadic. They would enter an area teeming with life and would move on after depleting their prey populations. In that scenario, settled animals seriously suffered and nomadic creatures had the advantage. They could move away and repopulate an area more quickly when Homo sapiens left.

In our time, the opposite is the case. Humans are more settled than ever and it’s the migrants who suffer more. If we want to protect a rare or valued settled species, we can set aside for conservation the area where it lives. But migrants need many areas. As human use of the globe expands, the places to stop and refuel during migration become fewer and far between. Conservation requires cooperation among many jurisdictions and competing interests for use of land and water resources.

Migration goes on. Plenty of species still pass through our area each spring and autumn. Their numbers vary year to year based on their populations, the weather and the food supplies. Passenger pigeons are gone, extinct due in part to habitat destruction by humans. But the Bohemian waxwings will return again some year. Will the current resident mockingbird still keep them at bay? And can we leave enough wild places for these waxwings, and all the other migrants, to survive? Time will tell.

Henry Lappen is an environmental educator who performs the show “A Passion for Birds.” More information is available at his website.