Miraculous migrations in the insect world ELIZABETH FARNSWORTH PHOTO
A pair of courting cicadas. These insects emerge by the millions from their underground habitat once every 17 years and migrate 10 feet above ground to reproduce.

Now that summer is behind us, many Valley residents are making plans for trips to warmer climes during the colder months and students are migrating back to college. But we aren’t the only creatures traversing thousands of miles when the seasons change — many insects use migration to their advantage.

For instance, the Guinness world record for a long-distance migration belongs to the desert locust (Schistocerca gregaria), which, during a memorable plague in 1988, made a 2,800 mile trek from Africa to St. Croix in the Caribbean. Another swarming locust species in Europe, with millions of insects flying en masse without bumping into each other, is the inspiration for new car designs that automatically avoid collisions. The Rocky Mountain locust (Melanoplus spretus), which once swarmed in the trillions over 198,000 square miles, is now extinct due to destruction of its habitat. 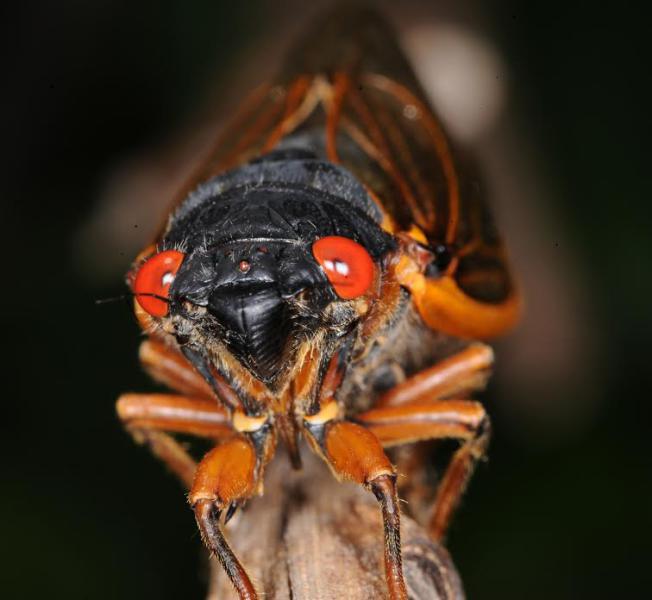 “Long-distance” migration is a relative term. Closer to home, for a tiny insect (1/8 inch long) such as our common black-bean aphid (Aphis fabae), flying a distance of a few miles is a major undertaking.

These insects overwinter in eggs laid on viburnum or euonymus shrubs. The first generation of all-female “stem mothers” emerges in spring and begins to churn out live female babies — birthing up to 30 young in a fleeting 50-day lifespan.

Many members of the new generation have wings, and use them to migrate to new host plants during the height of summer. They travel for many hours over 10 miles or more, at first drifting passively on wind currents. But their choice of a landing spot is anything but passive; cuing in on bright green vegetation (studies have shown that they prefer to land in monocultures of young leafy crops rather than diverse native meadows), they descend and begin to eat.

As summer wanes, the aphids return to their favored winter shrubs and produce a generation of females and males that mate and lay eggs to begin the cycle anew.

Another insect pest that stirs farmers’ ire and entomologists’ admiration has a migratory path rivaling that of the famed monarch butterfly: the fall armyworm (Spodoptera frugiperda).

Armyworms have become more common in our region in recent years, and fluttering nocturnal swarms of the small, tawny moths appear in my headlights like an early fall snowstorm. Recently, biologists have used DNA markers to trace the source populations of fall armyworms in the northeast: all the way to southern Texas and southern Florida.

This time of year brings the inspiring migration of a more charismatic insect in Massachusetts — one I look forward to each late summer. When the first large-scale cold front begins to usher cool, crisp autumn air into the Valley, swarms of the green darner dragonfly (Anax junius) take to the air, heading southward. To find out how far these gorgeous green-and-blue dragonflies can move, inventive entomologists have affixed radio micro-transmitters to them. Radio signals indicate that darners could move up to 85 miles per day, although most — huffing and puffing under the weight of the radio — move an average of eight miles, resting and feeding for two days out of three. Using isotope technology to trace the sources of water used by another group of dragonflies, other researchers determined that the species can actually migrate between 550 and 1,800 miles during their voyage from Ontario, Canada to Veracruz, Mexico.

My favorite example of a “mini-migration” is the miraculous movement of the 17-year cicada (Magicicada species). In June 2013, millions of these astounding insects emerged from their long life-stage underground as juveniles feeding on the sap of tree roots. Nymphs clawed their way through the soil, climbing 10 feet above ground, clutching the rough bark of their host trees. They molted from their shells, took a few deep breaths and began to hum in a rising chorus. On our drive to witness the emergence of the brood in Connecticut, we could hear their urgent, communal buzz from miles away. With brilliant red eyes, these three-inch-long insects looked formidable, but mostly, they were just intent on mating with another cicada. Which they did, with gusto, in the tree canopy, laying eggs in hollowed-out tree twigs until late July, when all the adults died. The larvae then migrated back downward, seeking homes in the soil where they will live and eat for another 17 years to emerge again.

But the story of insect migration isn’t always a happy one. This summer, the eyes of naturalists and lepidoptera-lovers were trained anxiously on the sky, hoping to glimpse our most charismatic local butterfly, the monarch. However, few of these high flyers were seen during their epic annual migration from central Mexico to New England and beyond. Once numbering in the millions where they overwinter, these butterflies are suffering from habitat destruction, wholesale clearing of their milkweed food plants for big agriculture, and many other stressors. Even a creature that flies thousands of miles each year cannot outrun these pressures.

It wasn’t until the late 1800s that people even realized that insects live long enough lives to migrate amazing distances or to wait, for more than a decade, for one joyful emergence. What else do these ancient creatures have to teach us? Let’s listen to their stories and hope that the monarchs don’t go the way of the Rocky Mountain locust.

Elizabeth Farnsworth is Senior Research Ecologist at New England Wild Flower Society in Framingham, a bug enthusiast and a peripatetic traveler of the world whenever possible.