Mission to a vanishing sea-ice landscape, part 3: When your garden melts

Note: This is the third and last installment commemorating the 10th anniversary of the International Polar Year, reflecting on the impact of Arctic climate change during the past decade. The first two installments appeared in December 2018.

After two weeks at sea aboard the U.S. Coast Guard ice breaker Healy examining the effects of climate change on the Bering Sea ecosystem in 2008, I was helicoptered to the Siberian Yupik village of Gambell on St. Lawrence Island. Gambell, or Sivuqaq in Yupik, population 700, is on the very northwest tip of the island at the entrance to the Bering Strait and just a short 36 miles from Russia.

I went to Gambell to learn how local traditional knowledge was being used to gauge the impact of climate change on the villagers’ daily lives and future. Gambell is dependent on the Bering Sea and its ice to provide food for their families and the village community. Their relationship with the Bering Sea is the bedrock of their culture and fundamental to their survival and well-being. 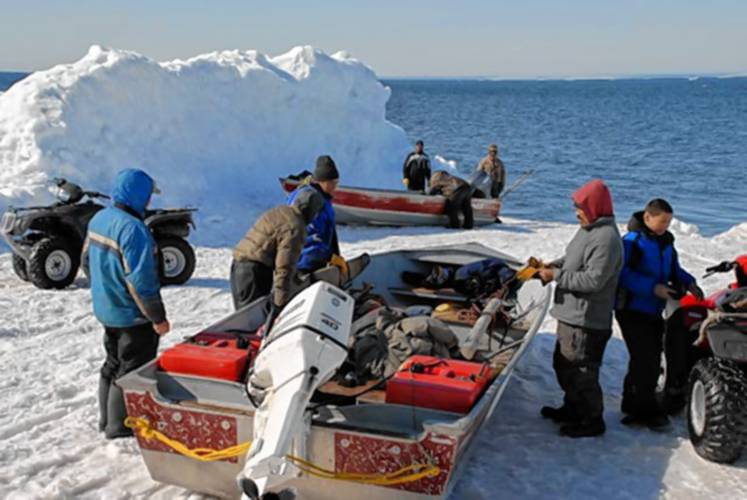 Subsistence hunters from Gamble Village prepare to launch into the Bering Sea off St. Lawrence Island. Reduced ice in the sea around St. Lawrence increases the length of hunting trips and the risks of those trips. Tom Litwin Photo

Following introductions to Gambell’s elders and leadership, I made my way to Leonard Apangalook, a Yupik elder who is a boat captain and subsistence hunter. He told me that the Village’s well-being is inextricably intertwined with the Bering Sea: “The sea is our garden, we live off the ocean — walrus, whales, seals, fish, crabs, birds. Most of our activities throughout the whole year revolve around preparation for the next year’s harvest — a cycle that was consistent all the time and very predictable. That was when things were normal….”

“Normal” was a time before the impacts of climate change became apparent. Elders pointed to their house rooflines to mark the depth of winter snow that used to blanket the village. The caches dug in the permafrost used for storing meat had stayed frozen year round. Shoreline landmarks were above the waterline and the shoreline was stable. Now they get much less snow and more rain, caches are melting in the summer, landmarks are disappearing under rising sea levels and erosion is eating away the shoreline. The thick ice that protected the shoreline from winter storms is disappearing.

Large icebergs of blue ice used to arrive on the shoreline in October. They called this the “mother ice” or “old ice,” since these bergs had broken off the permanent polar ice cap that did not melt from year to year. They don’t see the icebergs anymore. The stable sea ice that formed in late October now forms in late December and melts earlier in March rather than April. Subsistence hunting crews used to walk for miles from shore on thick ice in search of walrus and seals that depend on ice as a feeding platform, and for resting and giving birth. Now the ice and the walrus and seals are farther from shore. Boats exposed to the hazards of open water are needed to reach them. In November the crews would go out on thick ice to hunt walrus for Thanksgiving dinner. Now the ice that brings the walrus doesn’t appear until late December and January. This is the local knowledge that Leonard refers to when he says, “…when things were normal.” 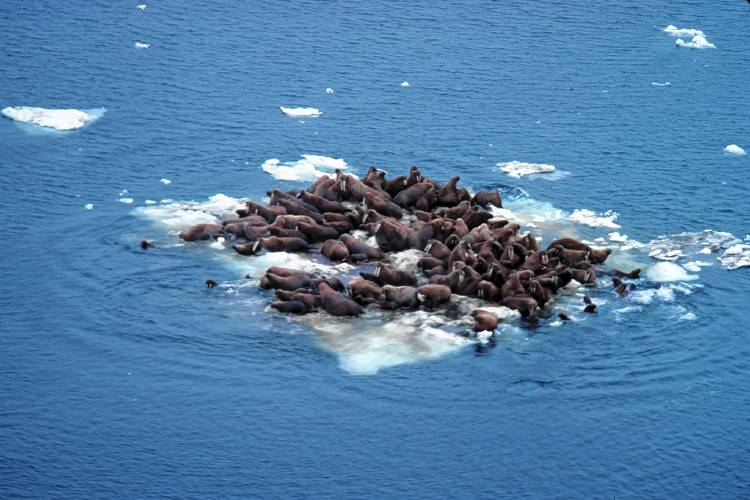 Cornerstones of the Yupik people’s millennia-old subsistence culture are the hunting crews and their boats. The captains of these small 18-foot motor boats surround themselves with trusted, experienced family members or friends. Apprenticeships begin as early as 10 years old. There is much to learn — the Yupik language of St. Lawrence Island has 100 words for sea ice and its many forms. Clearly communicating the ice and weather conditions that the boats are heading into can make the difference between safety and disaster. For example, with an approaching storm, it’s critical to know not to put your boat on the crushing windward side of a large flow, but rather on the protected leeward side where a camp could be set up for the night until the storm blows over. Elders pass local knowledge like this across generations. Elders — and the Sevuokuk Mountain cemetery — recount the trips that went wrong. Prayers are said in church asking for the safety of the boat crews and giving thanks for the food the sea provides. With prayers answered, family members and those community members in need of meat gather on shore to meet the returning boats where the “shares” are distributed.

In the decade since my visit to Gambell, change has accelerated dramatically. Vast areas of Bering Sea ice are thinning, retreating and disappearing altogether. Walrus once spread across large areas of ice are gathering in vulnerable shoreline herds for lack of ice. Water and air temperatures are rising — the Arctic is warming faster than any other area on earth. The villagers of Gambell face significant challenges as the foundations of their culture, traditions and subsistence lifestyle are tested.

Gambell village seems a great distance away from the Connecticut River Valley; what does this story have to do with us? Simply, “what happens in the Arctic doesn’t stay in the Arctic.” In the Valley, farmers have their own version of local traditional knowledge — what to plant, when to plant, how to plant, how one field’s soil differs from another. A regional sustainable agriculture movement reaches into our grocery stores offering everything from maple syrup to asparagus. How will a warming climate and extreme weather events we are experiencing challenge local traditional knowledge, based on what we have come to know as “normal?” Although unexpected, climate change is a unifying force around the world, demonstrating that our diverse societies have more in common than we might have thought.

Tom Litwin is a conservation biologist and former Director of the Clark Science Center at Smith College. He is recently retired from the Jackson Laboratory in Bar Harbor, Maine and Farmington, Conn., where he served as the Vice President for Education and continues as a Visiting Scholar. More on his Arctic and Bering Sea Thin Ice research can be found at pbs.org/wgbh/nova/extremeice/thinice.html. The first two parts of this story are at http://tinyurl.com/earthmatters-43 (Part 1) and http://tinyurl.com/earthmatters-44 (Part 2).