Moose signs in the north woods 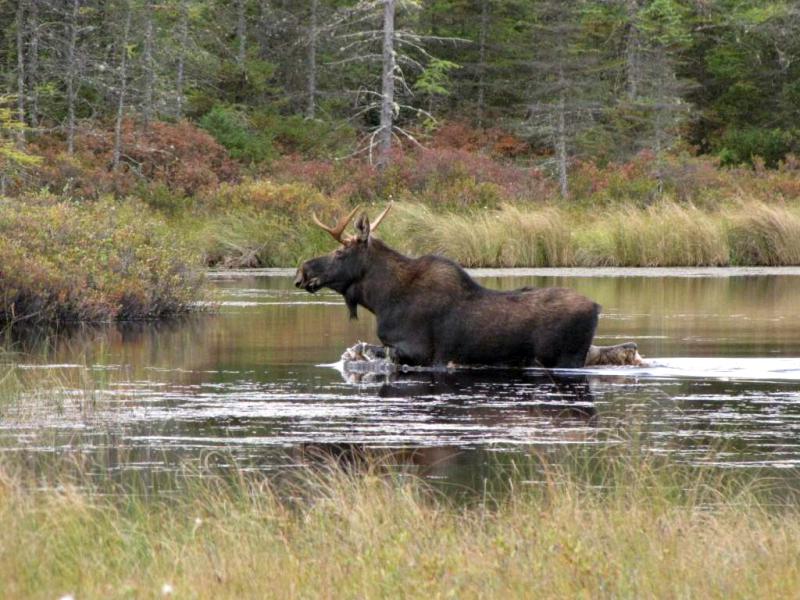 All 20 of us were quiet. We were learning about tracking in moose territory during the rut and were following our instructor Sue’s directions to look and listen in silence.

The sky was overcast with intermittent drizzle and the air was damp. The fall leaves and dense growth made it hard to see more than three feet into the surrounding forest. An extensive wetlands system extended east below the slope where we stood.

We had been walking quietly along a leaf-strewn woods road in a large and remote forest of sugar maples and white pine. Sue indicated for us to stop as she prepared to launch her cow moose’s mating response call into the air. She held both hands around her mouth and let out a groaning squeal that startled all of us with its volume and pitch.

We stared hard into the leaves in the direction of the swamp, half expecting a bull moose to come charging up the hill. Nothing. She tried again. We trained our ears carefully, listening for the low, rhythmic grunts of an approaching male, hoping he would appear — or were we each half hoping he wouldn’t?

We had driven to northern Vermont the night before, in time to meet the rest of our group for a day in the forest. Our leader was Sue Morse, founder of Keeping Track in Huntington, Vermont. Sue’s expertise in learning and teaching about animals by studying their tracks and signs was well known to all of us by now. This was our second day in the field with her, part of a six-day program on tracking the large mammals of New England. As important to us as Sue’s sharing her extensive knowledge about these large charismatic mammals was the training in how to see and where to look. The needle-in-the-haystack feeling — that I’d never learn how to see these signs that are all around — was starting to recede.

Earlier, Sue had taken us up a trail not far from a dirt road, and at the top of a large rise she showed us a muddy depression 10 feet in diameter. To my eye it did seem to be disturbed, but there was a lot more to it than that.

She stuck her hiking stick into the mud, stirred it up a bit, and had each of us smell the muddy tip. What a stench! Bull moose perfume! During the rut, bulls urinate in muddy areas and then use their hooves to splash the stuff up onto their bodies and necks to broadcast their scent far and wide — not too different from “Old Spice” cologne, as Sue was fond of reminding us.

At times bulls will kneel or even roll in the mud. She once watched a cow moose approach one of these bull moose “wallows,” as they are called; the cow sniffed and then rolled in the heady aromatic stuff.

Bull moose become scenting machines during the rut. They also have scent glands on their faces and heads. And they rub these glands on woody vegetation to leave calling cards for eligible females.

We came across a striped maple sapling that was unlucky enough to have attracted the attention of a bull in rut. The tree was thrashed and broken. Sue suggested that we smell the most exposed of the broken branches. I sniffed deeply and what an experience it was, kind of a combination of cow manure, turpentine and fresh ginger. Whatever we might think, it turns a cow moose on.

We spent a large portion of the day observing moose hoof prints and piles of scat groups, and identifying moose wallows and winter browse areas. In winter, moose include small to medium tree trunks in their list of desirables. They scrape off bark with their lower incisors and consume it. They prefer red and striped maple and witch hazel among other species for this winter forage.

At one point around lunch time I saw Sue kneeling down and parting the grasses in a wetland as the group was gathering for another what-do-you-see-here lesson. I didn’t really focus on what she was doing until she called us over to look at a nice deposit of moose scat. She collected a couple of pellets in her hand and began to describe the taste of the scat and then popped a couple of them into her mouth. We couldn’t believe our eyes.

It turned out she had hidden a couple of malted milk chocolates (which look just like moose scat) in the grass.

As much fun as we had, this was serious work. During our time exploring and observing in the woods with Sue, we learned an incredible amount about how to read the tracks and signs left behind by the largest mammals in New England. Our understanding of how these animals use their habitat increased dramatically. Together with other trained observers, we can use these skills to help preserve the ecological diversity, large mammal populations and natural community structures across our region.

Ted Watt is an educator/naturalist at the Hitchcock Center for the Environment. Sue Morse will be presenting a lecture on “Animals of the North: What Will Climate Change Mean for Them?” on Nov. 20 at 7 p.m. at the U.S. Fish and Wildlife Service auditorium at 300 Westgate Center Drive, Hadley. This talk is free and open to the public, sponsored by the Valley Environmental Education Collaborative. She will also lead two local, half-day field explorations Nov. 22. Pre-registration for these field trips is required, as space is limited; please call the Hitchcock Center at 413-256-6006 to register.