Mourning dove, a bird for all seasons 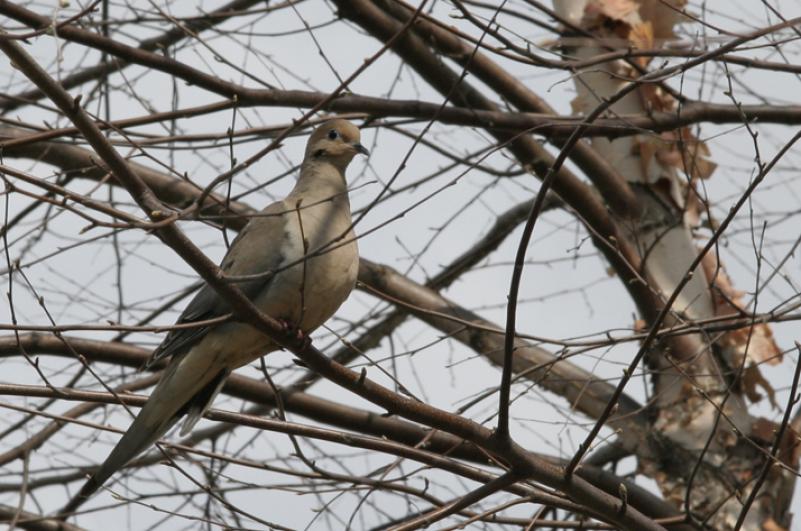 By David Spector for the Gazette

One of the pleasures in observing nature is that repeated encounters with familiar species can evoke ever deeper fascination and appreciation. The mourning dove, one of the most common and widespread birds in North America, is a case in point.

Decades ago I briefly imagined I was hearing an owl near my window, but quickly learned the mourning dove’s call, one of the easiest bird sounds to master. The low “COO-AH, coo, coo, coo,” (or “Hello, who-are-you”) is easily mistaken for an owl’s hooting by people just starting to identify birds by ear.

These coos, mournful to some human ears, provided the name of the species. Although all individuals have similar gray and buffy colors, close observation often allows one to distinguish the slightly fancier male from the female, with more reddish tints on his breast and more blue on his crown.

Its proportionately small head, plump, powerful body, and long tapering tail combine to give the mourning dove its distinctive teardrop shape in flight. The white-tipped pointed tail, with shorter outer tail feathers grading into longer central tail feathers, sometimes goes missing. An encounter with a predator or normal molt results in the occasional tailless mourning dove, a creature that looks strangely off-balance to observers familiar with the typical streamlined teardrop.

Mourning doves are here in the Connecticut Valley all year. Even on the most apparently barren winter day, if you approach a field of corn stubble you may raise a flight of hundreds of mourning doves from the furrows where they were gleaning fallen grain.

On any day you might see a mourning dove drinking at a puddle, using its bill as a straw — a trait shared with other pigeons and doves — unlike most birds, who toss back water one bill-full at a time.

Nesting occurs over most of the year, although winter nests are rare this far north, and easily observable nests are often built near buildings.

One March a pair of mourning doves nested in an ornamental yew bush a yard from my kitchen window.

I watched the male bring twigs to the female who constructed the nest, which was not fancy by avian standards but quite adequate to hold two eggs and an incubating adult. The male incubated in mid-day, and the female incubated for the rest of the 24 hours.

The squabs, typical of the pigeon and dove family, were rather ugly to human eyes; were they beautiful to their parents? I have no way of knowing how the adults viewed their offspring, but the parents provided well enough to allow the young to leave the nest by the end of April.

The parents continued to feed the fledglings after they had left the nest. I watched an adult insert its bill into the open bill of a crouching, begging young bird. As the two moved around the pivot of two touching bills, the younger bird spread its wings. I couldn’t see what substance passed from bill to bill, but I assume it consisted largely of “pigeon milk,” a nutritious substance produced by the stomach lining of male and female pigeons and doves — analogous to mammals’ milk production.

What was probably the same pair nested again later that year, but farther from the house and higher in a tree, which made observing them less convenient.

The flight of a flock of 100 mourning doves, a tiny fraction of the continent-wide population of hundreds of millions, can serve as a faint reminder of the somewhat similar passenger pigeon, which once flocked here by the billions but has been extinct for a century.

Several differences in biology suggest reasons why the more abundant bird is gone while its smaller cousin thrives. The passenger pigeon was much more of a specialist, needing abundant acorns and other tree nuts at nesting time, and it was gregarious in the extreme, nesting in groups of millions or more.

Its food specialization made it vulnerable to the loss of forests while the more versatile mourning dove thrived in open farmland. The passenger pigeon’s nesting behavior gave unregulated market hunters the opportunity to kill thousands of birds in short order.

Despite being the most hunted bird in North America (though not in New England), the mourning dove can withstand millions of well-regulated hunting deaths per year without significant diminution of its numbers. This resiliency is thanks to the mourning dove’s extended breeding season and widely dispersed population.

Mourning doves and other common species present opportunities to learn more about the natural world. Observation and study of familiar animals and plants can be enormously rewarding and enriching for anyone who takes the small effort to watch carefully and keep some notes.