The headlines started in March, from media nationwide. From CNN: “Invasive ‘Murder Hornet’ spotted in United States.” From The Associated Press: “‘Murder Hornets,’ with sting that can kill, land in US.” Here’s The New York Times: “‘Murder Hornets’ in the US: The Rush to Stop the Asian Giant Hornet.” Even in our own Gazette, a recent letter to the editor was headlined “Beware of the ‘murder hornet.’”

Actually, coverage appeared last December, but lacked something. A New York Times headline read “Asian Giant Hornet Invasion Threatens Honey Bees in Pacific Northwest.” From Washington state, “Hunt is on for giant, bee-killing hornet.” The hornets did not go viral then; other than the Times article, they were barely mentioned outside the Pacific Northwest. The word “murder” did not show up anywhere in those articles, much less the title. Add that word, and a story that the media mostly ignored when it happened became a nationwide obsession months later.

The facts: Vespa mandarinia is the world’s largest hornet, an Asian species originally described by scientists in 1852. The nickname “murder hornet” was popularized by a Japanese TV show in 2004. Last September, a hive appeared in Vancouver, B.C., and was immediately destroyed. A single dead hornet was found just across the border in Washington.

A few other sightings are considered reputable, but included no objective evidence. Despite months of searching by entomologists, beekeepers and government agencies, not one live hornet has ever been captured or photographed in the U.S., and since September none in Canada either. 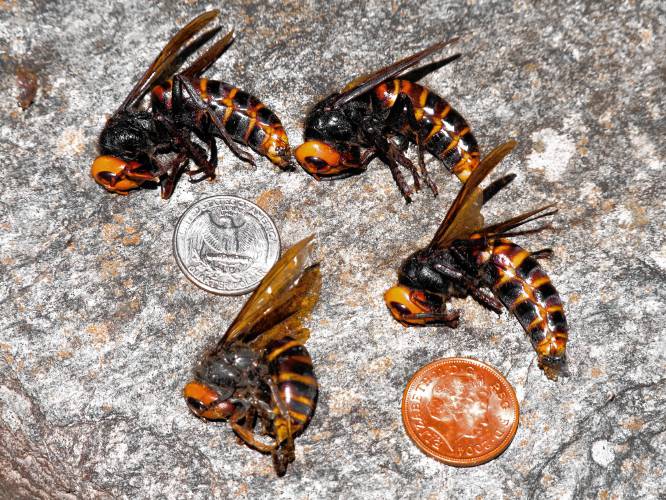 Vespa mandarinia, dubbed the “murder hornet,” is the world’s largest hornet. To date, just one hive has been found — and destroyed — in Vancouver, B.C. Hyakuneko/via Flickr

Many articles cite scary-sounding numbers, that the hornets kill “up to 50” people per year. Most fail to mention that honeybees and wasps already kill more than that in the United States every year. Both here and in Asia, only a tiny percentage of victims die, nearly all highly allergic or otherwise sensitive to bee or wasp venom. Mammals, mostly cows and dogs, kill more people.

In Japan, where most giant hornet deaths take place, roughly 5,000 people per year drown in their bathtubs. Headlines screaming “murder tubs” or “murder cattle” have yet to appear.

The biggest problem with Murder Hornet Hysteria, however, is that it has caused a massacre of innocent American insects. People certain that they’ve killed one in states including Arkansas and North Carolina, nearly as far from Vancouver as possible in the U.S., have flooded experts with calls.

Every single call has been wrong. Many have confused the Asian giant hornet with the European hornet, a smaller but similar relative that arrived here in the 1800s. Others have killed yellowjackets, paper wasps or bald-faced hornets; non-aggressive wasps such as cicada killers or mud daubers; or bumblebees, honeybees — even wasp-mimicking beetles, moths and flies.

When we read and hear these stories about “murder” hornets and “killer” bees, they can trigger a generic fear of stinging insects. Unfortunately, we hear much less about the role this highly diverse group of organisms plays in our local ecosystems.

We need to stop panicking and recognize the many positive aspects of our native wasps. They are among the most common pollinators, a group that many individuals and communities have been working to protect recently.

Wasps are also perhaps the most effective pest control in nature. While many gardeners spread non-native ladybugs and mantises under the misguided impression that they control undesirable insects, various wasps raise their larvae on strict diets of caterpillars, grasshoppers, stinkbugs, aphids and other plant-damaging critters. One burrow-digging species is renowned for hunting the tree-killing emerald ash borer. Bald-faced hornets consume deerflies and horseflies, yellowjackets eliminate huge numbers of garden-eating caterpillars, and Polistes paper wasps have been proven to reduce crop damage.

For anyone who dislikes spiders, there are literally hundreds of arachnid-killing wasp species. And the stingless ensign wasps, family Evaniidae, attack cockroach eggs. We can eat wasps too: Even the “murder hornets” themselves are hunted by some Japanese communities that steam larvae with rice, fry adults on skewers, or drown them in an alcoholic drink called shochu.

Beyond tangible benefits, wasps are inherently astonishing creatures. Some herbivorous wasps inject proteins or RNA molecules into plants, reshaping the plants’ tissue into galls that feed and protect the wasps’ young. Certain parasitoids use viruses to influence the behavior of their victims, including some that even manipulate hosts into guarding the wasps’ pupating offspring!

Many species craft with mud, some creating little clay pots to house caterpillar-eating young, others making long organ-pipe-like tubes which they stuff full of spiders. Our antipathy for bald-faced hornets and Polistes wasps forces many of us to overlook their amazing skill at crafting paper. Add the cricket-hunting, grass-carrying Isodontia wasps, and we have a “three little pigs” parallel: houses built of straw, wood (paper), and bricks (mud). Maybe, instead of killing wasps, we should write children’s books about them!

Joshua Rose is a naturalist who lives in Amherst. He is a Hitchcock Center member, a board member of the Hampshire Bird Club and a contributing editor of the website bugguide.net. He regularly leads programs for local nature-oriented groups.