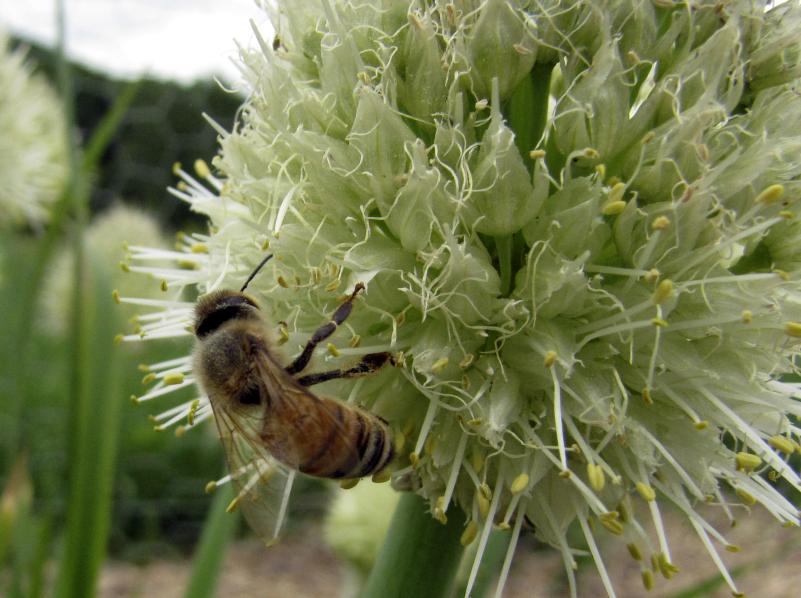 Longtime readers of this column may remember an essay from October 2010 by Annie Woodhull about the disappearance of honeybee colonies, a phenomenon dubbed colony- collapse disorder, or CCD. As she pointed out in that column, we depend on honeybees to pollinate a tremendous number of food crops. “Bees pollinate not only the vegetables and fruits that we eat, but clover for the cows, goats and sheep that make milk and cheese, and cotton plants for the clothes we wear,” she wrote. “[They] are responsible for one out of every three mouthfuls of food we eat.”

At the time that column was written, the cause of CCD was only beginning to be understood.

The prevailing view was that a variety of factors, from pesticides to parasites and pathogens, combined to bring about these collapses. Since then, evidence is emerging that singles out one particular class of insecticides, a widely used group of chemicals known as neonicotinoids, as the prime suspect in the death of bee colonies.

As the name implies, neonicotinoids are chemically related to nicotine, a naturally occurring plant poison. Unlike nicotine, however, these compounds are much less toxic to mammals, while retaining their potency toward insects. And because they are water-soluble, neonicotinoids are readily taken up by plants through their roots. Bugs that suck or chew on plant parts are exposed to the insecticide when they feed. Looking only at these characteristics, this might sound good: The chemicals have low mammalian toxicity, and pests are exposed through feeding, so less pesticide needs to be applied. But bees as well as pests ingest these toxins, since the chemicals also make their way into the flowers, nectar and pollen that bees rely on for their sustenance. Worse, the bees are affected by doses that don’t kill them outright but can affect their behavior; apparently, exposure to sublethal amounts can disrupt the bees’ sense of direction. If they can’t find their way back to the hive, the colony suffers and eventually dies.

The mounting case against the neonicotinoids has led to bans in several countries and, most recently, a two-year suspension of their use throughout the European Union. Italy, which unilaterally banned neonicotinoid use on corn in 2009, saw a dramatic increase in bee colony survival in the same year. As a result, the ban remains in effect there despite industry opposition.

Here in the U.S., the Environmental Protection Agency has not taken any of the neonicotinoids off the market. The agency’s review process for such actions typically takes years, so it’s uncertain as to when or whether these chemicals may be removed from use.

In the absence of EPA action, what can citizens do? The most effective step for homeowners is to look at their own yards. Neonicotinoids are widely available in lawn and garden products to control insects on ornamental plants, and the doses are typically higher than those recommended for food crops. If you want to do something to help the bees, create a refuge for them in your yard. Stop using chemicals that contribute to the problem and start creating environments that support bees.

Here’s a simple guiding principle for creating such refuges around your home: If you can’t grow something without resorting to a toxic chemical, you probably shouldn’t be growing it.

There is a wealth of information to help the gardener grow food, flowers and shrubs without poisons; take the time to learn what you need to create the kind of yard and garden you like while keeping it free of chemicals. If you don’t feel you can subscribe to this advice yet, at least keep the neonicotinoids out. Read the labels on pesticide products before you buy: Look out for imidacloprid, acetamiprid, dinotedfuran, clothianidin, thiacloprid and thiamethoxam; they are all members of this group. If you’re buying nursery stock, ask the nursery staff if the plants have been treated with any of these chemicals. Buy seed from sources that don’t chemically treat them, since neonicotinoids are also used to coat seeds.

At home, you can plant flowers and flowering shrubs and trees that attract and feed bees. Ask at your local garden center or contact UMass Extension for information on what will work best.

Of course, these actions alone won’t save the bees and other essential pollinators. For that we need a comprehensive strategy of crop production that is far more sensitive to the deleterious effects of many of the agricultural chemicals used so widely. But it is possible to create a broad network of refuges where pollinators can safely feed and do their essential work. Such refuges may be important sources from which other environments can be recolonized once our agricultural areas are made safe for them.

Michael Dover is a retired environmental scientist and member of the board of the Hitchcock Center for the Environment in Amherst.