New parents discover the swap economy for baby stuff and beyond

In 2012, I attended a conference at which Oberlin College professor David Orr spoke of “life in a greenhouse world.” One thing we’ll need to do, he said, was to “neighbor as a verb.”

The concept of neighborliness as a response to climate change has stuck with me ever since. It made a lot of sense to me that being good neighbors will strengthen us and make us more resilient in an uncertain future. 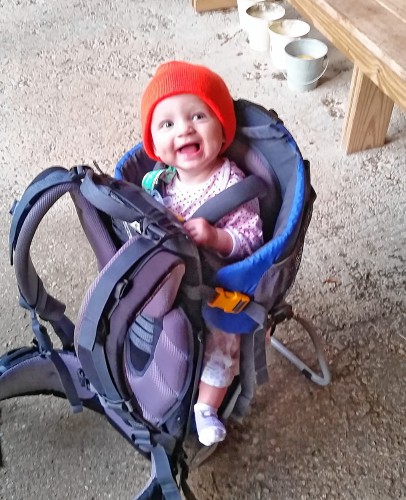 I got a glimpse of just how amazing neighborliness can be earlier this year when I was pregnant, and became the unexpected recipient of armloads of used baby items from my community, and even some strangers! I observed what the world could be like when there is a community of people exchanging resources and love. It gives me a lot of hope.

As we prepared for our baby’s arrival, my partner and I made the conscious choice to buy as few new items as possible. That was a more radical choice than I realized. When you’re a expecting a baby, everywhere you look you’re being marketed to. Search for a crib online once, and suddenly advertisements for cribs appear on your Facebook, Gmail and even weather websites. Well-intentioned friends and family make suggestions about what you really should have on your baby registry. Everyone wants you to buy stuff — there’s even a store called Buy Buy Baby!

Expectant parents are easy prey to this marketing, because who wouldn’t wish to provide their new baby with the best possible start to life? It can be hard to sort out what you actually need from what you can do without. Forget morning sickness, it’s nauseating to contemplate how much you can spend on baby stuff and, worse, to imagine the environmental impact of manufacturing all that stuff that gets used so briefly before being thrown out.

We’re actively encouraged to discard certain baby items, such as car seats and cribs, after a few years to keep up with the current safety requirements. In spite of myself, I almost bought a new crib rather than finding a used one, just for peace of mind. But then my partner came home with a perfectly serviceable used crib he found on the free page of Craigslist! And my peace of mind was still intact, maybe even improved.

My overwhelming sense in all this has been that there is way too much stuff in the world and as surely as there is something I need for my baby, there is another parent somewhere who is done with the same item and is ready to give it to someone else.

We put out word that we were looking for baby and maternity clothes to our coworkers and community. To our delight, we received more stuff than we could ever even use. It was thrilling to save money on these things, but something else happened. It was a feeling of deep contentment that came with this kind of win-win-win situation. In this case: 1) Someone passes on something they don’t need, which frees space in their home — WIN; 2) The recipient doesn’t have to buy this item — WIN; and 3) Something was saved from a landfill, or at least was used heavily and loved more than once — a WIN for the environment.

The satisfying and contented feeling you get when you exchange resources with neighbors is key for Orr’s “greenhouse world.” In a future where acquiring basic resources may be more difficult, it will be important to be grateful for what we have and not always depend on buying brand new things.

It makes so much sense. Children outgrow their clothing faster than we can replace it. Why should we buy new when someone nearby has just what we need? Pondering the connections that were made during this experience, I picture other ways that neighborliness can (and does) strengthen our lives: sharing excess tomatoes with the neighbors instead of having them go bad on your counter, hosting clothing swaps to simultaneously get “new” clothes and get rid of the old, a neighborhood sharing expensive household equipment like lawn mowers and power tools instead of everyone buying their own.

The thought of reducing landfill waste and energy usage is such a no-brainer, and there is a certain beauty and joyfulness when this sharing is possible.

I feel incredibly privileged to be the recipient of so many hand-me-downs because I know in our case we were particularly lucky. We’ve already passed on a lot of what we couldn’t use, and it makes me giddy to keep the exchange flowing.

I hope that as our child grows, we become better and better neighbors and remain strong players in our community’s swap economy.

Katie Koerten is an environmental educator at the Hitchcock Center for the Environment. Find a Buy Nothing group near you.