Nothing could be finer than a wren called Carolina 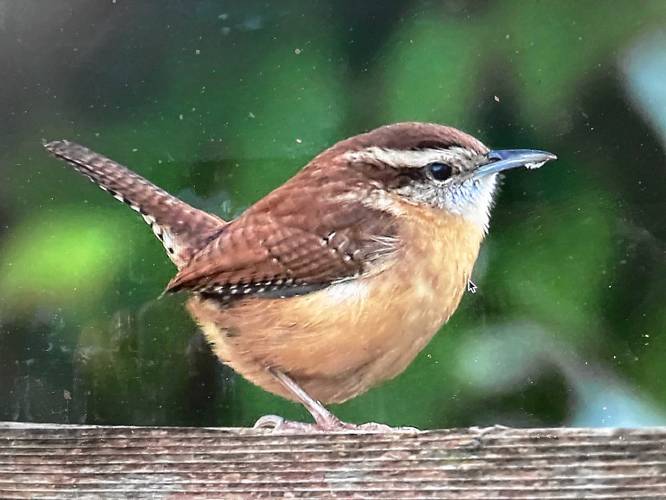 Like other wrens, the Carolina wren has finely barred wing and tail feathers, a gently decurved bill, and the habit of cocking its tail. The species is larger and more boldly marked on the face than other eastern wrens. JOHN VAN DE GRAAFF

Each male has about 30 different songs, similar in general structure but not all necessarily interpreted as drink-related. Poet Charles Weld hears this wren quoting suffragist Susan B. Anthony’s “failure is impossible” or, in a Buddhist version, with the wren as Zen teacher, “failure is impermanent.”

The Carolina wren builds its nest in partially enclosed spaces, or cavities. For cavity nesters that don’t dig their own holes, availability of nest sites often limits their population size. The Carolina wren, however, is more flexible in its nest site choice than are many other cavity nesters. It uses hollow trees, but also tangles of vines or roots, heavy ground vegetation, old paper-wasp nests, and artificial sites such as flowerpots, mailboxes, tin cans, and even the glove compartment of an abandoned car.

The Carolina wren, which is closely related to a group of tropical wren species, can be considered a tropical representative in North America. Like many tropical species, this wren is a non-migratory permanent resident that maintains a year-round pair bond between a female and a male on the same territory.

Unlike its tropical relatives, though, and similar to many temperate zone species, only the male Carolina wren sings.

In New England, Carolina wrens encounter weather that their tropical cousins don’t face. Calculations based on the energy acquired from food and the metabolic rate of this species indicate that a Carolina wren needs to eat about two-thirds of its body weight in insects, its primary food, to maintain itself on a cold day. For a bird that feeds on and near the ground, heavy snow and ice present challenges, and in severe winter weather many Carolina wrens don’t survive.

As a result, populations of this species crash after a bad winter and gradually recover over several years of milder weather (perhaps the poet who put “impermanent” in the song of this wren had this precariousness in mind). The fluctuation in abundance has long been a feature of the Carolina wren at its northern limits. In recent decades the population numbers have varied around an increasing average, and the species’ range has been moving north.

Especially in more open sites, Carolina wrens often construct domed nests for fuller enclosure. Throughout the year these birds roost at night in nests or similar hollows, with the two members of a pair often roosting together.

As with other southern species expanding their ranges northward, global warming and human habitat changes probably are factors for the Carolina wren. The exact features of the environment that allow more of this species to survive in the north, though, are not clear. It seems likely that less frequent heavy snows and less frequent extreme low temperatures play a role.

A study in central Michigan suggests that feeders, especially feeders supplying food accessible to this wren such as suet and peanuts, might be more important than temperature for wren survival. (The role of snow cover was not addressed in that study.) Because it uses artificial nest sites, the presence of bird boxes, sheds, flowerpots, etc., found around human houses may also allow range expansion.

Climate change and suburbanization produce too many wild losers, but some species that are well adapted to live with people, like this one, benefit.

In her poem “The Singing Wren,” Dora Read Goodale describes a bird that lives in “a little stay-place back o’ the shutter,” an appropriate nest site for a Carolina wren. The poet interprets the bird’s song as indicating that “He’s so full of happiness.”

Maybe. The wren’s life suggests that happiness is not the full story. If the bird sings when happy, we might guess that he is happiest in the morning, happier in summer (when he averages about five phrase repetitions per song versus about four in the winter), happy when carrying food to a nestling or fledgling, and happy when confronting a territorial intruder.

In this North American species, unlike its tropical relatives, are females never happy? (A poor situation for a bird that Charles Weld versified as the “Susan B. Anthony wren”!) As ornithologist David Lack pointed out with this biology-based argument, there is little to indicate that singing birds express human-like happiness.

Although a singing Carolina wren might not be happy, we can be happy to hear him. Even as we deepen our understanding of the bird’s biology, we, poets, poetry readers and birdwatchers can enjoy listening — whether we project the bird as singing of breakfast beverages, political confidence, Buddhist teachings, or happiness.