O, say can you see an eagle? 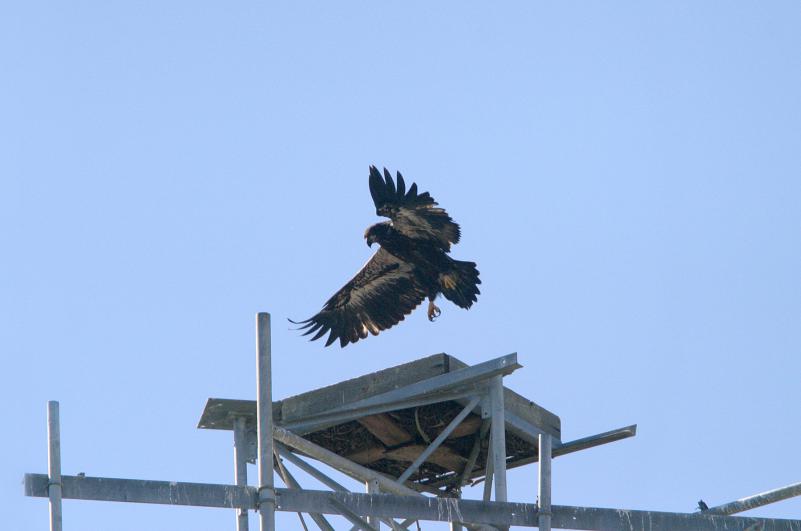 Photograph by John Van de Graaff. A nestling bald eagle, still several years away from a white head and tail, stretches and jumps as it prepares for fledging.

When a bald eagle flies, it lifts more than its roughly 10 pounds.

The weight of nations has been carried for thousands of years by various eagles serving as symbols for Armenia, Mexico, Poland, ancient Rome and many other nations.

For more than two centuries, the bald eagle, native only to North America, has flown for the United States and, over the last half century this eagle has come to symbolize even more than a country. As one of the species most threatened by the insecticide DDT, which caused thinning of eggshells leading to the death of embryos, the bald eagle became a prominent representative of the inadvertent damage done by human chemicals.

More recently, the recovery of its populations (DDT was banned in the United States for all but a few limited uses in 1972) stands as an example of what can be done when people work together to limit pesticide use and to invest resources in correcting past mistakes.

When I see a bald eagle, however, my own experiences resonate more deeply with me than all its history and symbolism. My memories of the bird go back to even before I first saw one. When I started recording bird sightings, this species was high on my wish list of birds to see, and, to increase my chances, I read about its shoreline habitat and distribution.

I finally crossed paths with a bald eagle at a national wildlife refuge in the Chesapeake Bay region, where the species was still relatively easy to find, even at the depth of its DDT-induced rarity. Since then, I have been privileged not just to see bald eagles at many locations across North America, but to witness details of this bird’s life.

I have watched bald eagles as they hunt low over water, drop their legs and sharp talons, and grab fish that venture too close to the surface. Like other predators, these birds are not successful with every attempt at prey, and I have seen many misses. On one such miss, rather than just wetting its feet, the bird hit the water with much of its body and had difficulty lifting off with its wet feathers; it then used its massive wings to row clumsily back to land where it took some time to dry off before flying again.

Eagles fish for a living, but for them the term “fish” applies to any appropriately sized animal swimming near the water’s surface. A group of friends and I once witnessed a muskrat being carried to a bald eagle nest above the Connecticut River.

Bald eagles scavenge as well as hunt; I have watched them feed on the carcasses of coyote-killed deer and rummage through garbage dumps. Indeed, the largest concentration of bald eagles I have seen — several dozen birds — was at a dump.

I enjoy observing birds vocalizing, cleaning and nesting — behaviors found across all sizes of birds. Where bald eagles gather, one can hear their chirpy call, a call that elicits more laughter than awe from human observers.

A bald eagle wading into water and splashing about, bathing like a sparrow at a backyard birdbath, is a fun sight. I have seen these eagles at their bulky nests along the Atlantic and Pacific shores and along various waterways in between.

A nest is used year after year, often lasting longer than the pair of birds that builds it, as members of the pair die and are replaced by younger eagles that continue to add sticks to it. Such a nest is a form of material culture, similar to a human house lived in and modified by generations beyond the one that originally built it.

I now live between the Connecticut River and the Quabbin Reservoir, two bodies of water where bald eagles are common, and I sometimes see eagles over my house and from my commute parallel to the river.

When I see an eagle I am aware of the layers of symbolism associated with the bird, and I remember enjoying my many experiences with the species, many shared with friends and students. As a biologist, I try to remember that an eagle is just a bird. A bald eagle does not concern itself with its symbolism or with the humans who might be awestruck or amused by it. The eagle simply tries to survive and to reproduce.

One of Hartford poet Wallace Stevens’s most famous poems enumerates “Thirteen Ways of Looking at a Blackbird,” and there are at least as many ways of looking at bald eagles.

David Spector is a former board president of the Hitchcock Center for the Environment and teaches biology and English at Central Connecticut State University. He thanks the members of his writing and bird classes for editorial input on a draft of this essay.