When I think of oaks, images of statuesque trees arise — standing alone in a pasture or reaching strongly for the sun in a deciduous forest. I’m sure many of us carry similar pictures either from here in New England or from almost any other place on the continent. Botanists classify oaks in their own genus — Quercus, the ancient Roman name for oak.

There are 80 oak species in North America. Depending on whom you ask,  the Valley hosts nine or ten native species. Several are named for colors: northern red, black, scarlet, white and swamp white. Pin oak and chestnut oak bring us to seven species of oak trees. Two smaller oaks — the bear or scrub oak and the dwarf chestnut oak — are considered shrubs, neither one larger than 15 feet at maturity. Bur oak, primarily a Midwestern species, is reputed to grow in the south of our valley, but I haven’t seen it.

In our area, the various oaks grow in specific habitats, some more limited in their requirements than others. Red, black, scarlet and white oaks are generalists, usually growing in mesic (moist, not too dry and not too wet) forested environments. They can also grow standing alone in old pastures or on campuses. They grow to great size and age and, to my eye, bring an elegance and established calm to these settings. Swamp white and pin oaks are found in wetlands in many locations — we have them in the forest around the new Hitchcock Center. Chestnut oak grows primarily on ridge-tops and other drier environments. Bur oak can be found either in upland or wetland habitats. The two shrubby species prefer drier terrain, either sandy soil or exposed ridge-tops. They’re found in abundance in the Montague Plains State Wildlife Management Area. 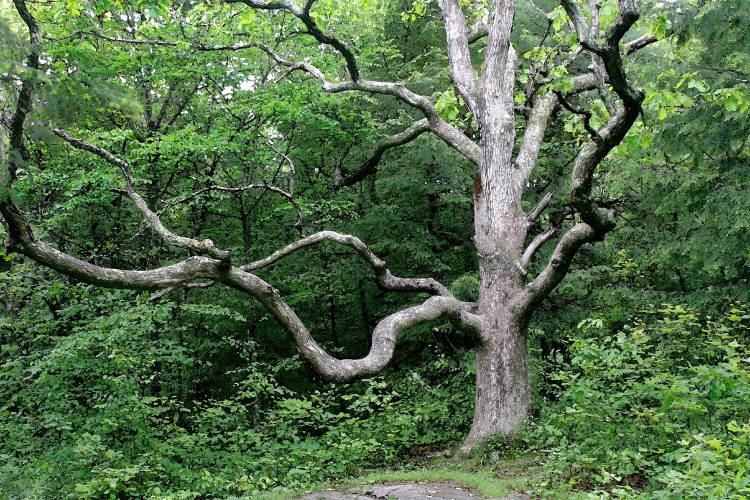 A white oak near the entrance to High Ledges Wildlife Sanctuary in Shelburne, Mass. Photo by Rebecca Reid

The diversity of oak species is matched by the diversity of animals they support. Doug Tallamy, a University of Delaware ecologist, has studied oaks as hosts to butterflies and moths. So far, he has found that North American oaks support at least 534 species in this group. This is the highest number of these insects feeding on any North American plant genus. And this doesn’t include the wasps, beetles, flies and other insects — plus the numerous other invertebrates and vertebrates — that are also associated with oaks.

All oaks reproduce via acorns, which look quite different from species to species. Bear and dwarf chestnut oaks have cute little acorns, around a half-inch in length. Chestnut oak acorns are among the largest — more than two inches. Oaks are divided into two closely related groups that have evolved different reproduction strategies.

The white oak group includes the white, swamp white, chestnut, bur and dwarf chestnut. The acorns of these species are formed from flowers that open in the spring, then the acorns grow through the summer, mature in the early fall, and tumble to earth to germinate immediately. These are highly prized by wildlife, including squirrels, chipmunks, rabbits, opossums, raccoons, deer, bears, wild turkeys, crows, ruffed grouse, wood ducks, blue jays and more.

The red oak group includes northern red, black, scarlet, pin and scrub. The acorns in this group begin their growth as flowers in the spring but don’t mature until autumn of the following year, a year and a half after fertilization. The resulting acorns then drop to the ground, germinating the next spring — a full two years after they were fertilized. So they are exposed to acorn-eaters for a much longer period and have to protect themselves. They do this by incorporating tannins and other bitter and repellent compounds into their acorns. Acorns in the white oak group disappear quickly, while those in the red oak group remain on the forest floor for much longer, evidence that these protective strategies work.

You may be familiar with the term “mast year.” This refers to a season when trees and shrubs almost simultaneously produce an abundance of mast (nuts and fruits). Mast years occur irregularly. Oaks produce large crops of acorns one year, sometimes several years in a row. The following year they will produce almost none. Biologists have come up with a variety of explanations for this phenomenon. The one that makes the most sense to me is that oaks produce a glut of nuts one year — so many that there are more than the squirrels, acorn weevils and other nut consumers can eat. So there are enough for some to germinate and start their journey toward becoming a tree. If they produced bushels of nuts every year the populations of nut consumers would rise to the point that all the nuts are eaten. Instead, the trees alternate mast years with low-acorn years so that the populations of nut predators will boom in the former but then crash during the latter. This strategy helps provide enough so that some acorns will sprout and grow.

Despite all we know about oaks, the myriad ways they interact with each other and with other organisms continue to raise intriguing questions. For instance, how do oaks know when it’s a mast year and how do they “collaborate”? Oak trees and their ecosystems are intricate, complex systems, and we still have a lot to learn about how they function.

Ted Watt is a naturalist & environmental educator at the Hitchcock Center for the Environment.