Of beech bark, bumps and bears

The smooth silvery gray bark of beech trees seems to call out, “Write on me!” Or at least those with handy pocket knives may think so (not a good or polite idea, by the way). Some of the thinnest bark of our New England trees, not fire-adapted like thick oak or pine, nor flaky like the shagbark hickory, beech bark does readily record past wounds and impacts as obvious scars eventually overgrown with callus. 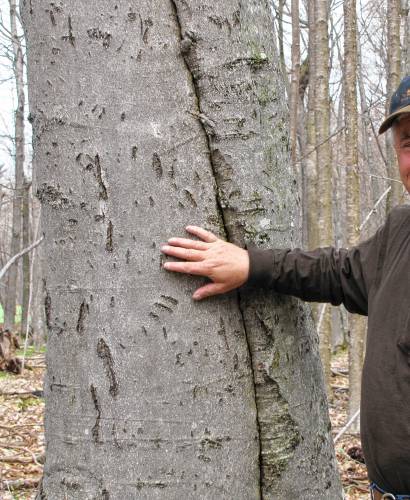 Bear claw marks at Seney National Wildlife Refuge in Michigan. In the fall, the bears climb the trees to feast on nutritious beech nuts and leave their claw marks in the smooth bark. Mandy Salminen/US Fish & Wildlife Service

Beeches are relatively common in our area, part of the northern hardwoods group that also includes sugar maple, yellow birch and white ash. And beech trees seem to be increasing in number, especially in Maine, New Hampshire and Vermont, perhaps due to higher temperatures and rainfall brought on by climate change. On many of the larger beeches in our region, you can find a series of four parallel thin slices, each about 3 to 5 inches long, reaching diagonally up into the crown — a bear has climbed this tree! Are the scratches fresh? Perhaps you should carefully and quietly look upwards? More often one finds a genealogy of marks, some more healed than others, chronicling years of mother bears and cubs climbing to reach nutritious, fatty beech nuts on higher branches. Larger bears will reach out and pull the branches in towards the crotch where they perch, creating what looks like a nest but is in fact just a safe and important snack bar.

While you are looking for bear scratches you will probably notice a few other patterns. Some beeches are covered with small, waxy white tufts, and others occasionally have what looks like reddish warts. These are signs of an invasive disease complex called, aptly enough, beech bark disease. Non-native beech scale insects have piercing mouth parts called stylets, which they insert into the phloem tissue just below the surface of the thin beech bark and suck up the nutritious sap while covering themselves in a protective white fuzz.

The insects aren’t the main problem, however. As they pierce the bark, they introduce one of several kinds of fungal parasite that infect the tree and causes cell death. Another feature of beech bark — numerous bizarrely shaped lumps and eventually open cankers (dead sections of bark) — is the result of this fungal infection. As these cankers accumulate around the tree, they girdle it, killing the canopy. And here is where the bear and bark disease stories come together. The combination of insects and fungi takes a while to kill the tree, and in fact, even really grotesquely cankered beeches can continue to produce beech nuts in abundance. But as the tree is dying, dozens, even hundreds of sprouts come up from the tree’s roots, creating a thicket of young stems that eventually take over the place where large trees, more susceptible to the disease, once stood. No more beech nut snack bars!

Wildlife biologists have been concerned that the loss of beechnuts as a food source, and in particular the reduced chance for bear families to climb up together and harvest food, could have an impact on bear survival. Might this be another case where an introduced disease caused complex and interconnected changes to multiple organisms? It turns out that in this case, it is hard to tell. New England bears seem to have found another ready source of fatty nutritious seeds — in our back yards!

While it is probably an exaggeration to claim that an introduced European disease of beeches is the reason your bird feeder was destroyed last night, there are a few lessons here. The living creatures that surround us form an intricate and dynamic web. Some changes in the web of life are slow and some are fast. While many are not obvious to us in our human-centric lives, some are locally and historically devastating, like the disappearance of chestnuts due to blight and the widespread destruction of American elms, also caused by an imported disease.

Beech bark disease will probably not wipe out the beeches in our region, but it has changed the forest. Ironically, even as climate change may be leading to more beeches and increased dominance of beech species in our forests, beech bark disease is spreading too and shortening the lifespan of the new trees. Perhaps resistance to the fungus will evolve and over decades or even millennia, a new equilibrium will come about — unless other changes, such as climate change, overwhelm our beeches.