Peace, love and bonobos: How a great ape can lead us to a better world 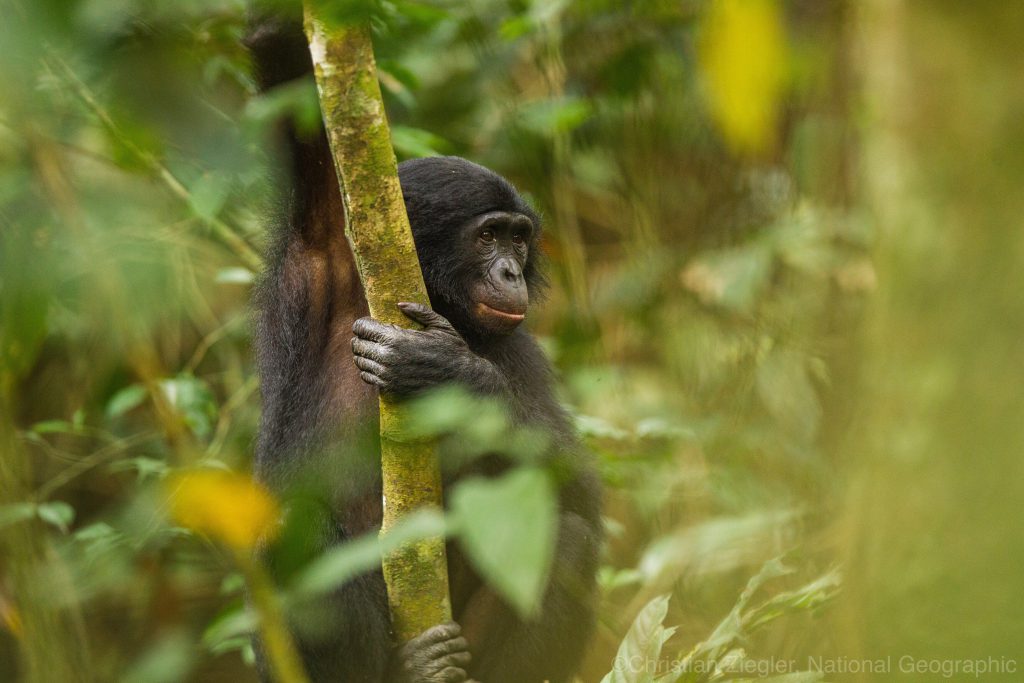 By Sally Jewell Coxe For the Gazette

Do you know what a bonobo is? Have you ever seen one? If you answered “yes” to either of these questions, you are an exception.

Bonobos, closely related to chimpanzees, were the last great apes discovered by Western science, and still remain largely unknown to most of the world. Found only in the Democratic Republic of the Congo, bonobos inhabit the heart of the world’s second largest rainforest.

Bonobos are humankind’s closest great ape relatives, sharing almost 99 percent of our DNA. Distinguished by their peaceful, cooperative, matriarchal society, their sexuality and their remarkable intelligence, bonobos stand apart from the other great apes in fascinating and important ways.

They elucidate the roots of human nature, helping us to better understand ourselves. Bonobos are an endangered species, threatened by hunting and habitat destruction. Their populations are small and fragmented. Today, as few as 15,000 bonobos remain in the wild.

The Bonobo Conservation Initiative (BCI), an international organization dedicated to the conservation of bonobos and their habitat, is taking on this challenge. Working with indigenous Congolese people through cooperative conservation and community development programs, BCI is establishing new protected areas and leading efforts to safeguard bonobos wherever they are found.

The Bonobo Peace Forest is the guiding vision of BCI: an integrated network of community-based reserves and conservation concessions, supported by sustainable development. Conceived by BCI and Congolese partners in the wake of one of the world’s most enduring and violent conflicts, the Peace Forest promotes cooperation and conservation, providing hope, inspiration and opportunity to local communities throughout the Congo Basin. To date, BCI and its partners have achieved official protection for almost 9 million acres of rainforest within the Kokolopori Bonobo Reserve and Sankuru Nature Reserve, as well as working with several other communities in key sites throughout the bonobo habitat.

Tensions between conservation and economic development are found everywhere but are especially acute in the Congo, which for years has been rife with conflict, natural resource exploitation and extreme poverty. A recent study by the Rainforest Foundation UK found that the common “guns and guards” approach to conservation in the Congo Basin is largely ineffective, failing to protect wildlife and often causing great harm to indigenous communities.

By creating large-scale community-managed reserves in pristine rainforests, BCI’s approach can reduce these conflicts by aligning the goals of conservationists and indigenous people. In doing so, the Bonobo Peace Forest helps alleviate poverty via sustainable economic development while addressing such global issues as species loss, biodiversity and genetic diversity in ecosystems; climate change exacerbated by deforestation; and the loss of indigenous cultures, languages and traditional knowledge.

Respect for indigenous wisdom is one of BCI’s founding principles. Its programs and methods are grounded in and emerge from traditional knowledge and governance systems. Local communities and BCI share expertise and develop solutions together, adapting to current realities. BCI’s partnerships are therefore sustainable, weathering inevitable fluctuations in external support. Congolese leaders and communities choose to work with BCI, and are growing an organically expanding, self-organized and firmly rooted network known as the Coalition for Community Conservation of Bonobos.

The aim of these efforts is to promote peace, well-being of communities, and protection of bonobos and overall biodiversity. The focus on community-managed reserves honors local people’s desire to have control over their rainforest home. Their enthusiastic engagement is assured by linking conservation to support for agriculture, healthcare, education and micro-enterprise programs. BCI also prioritizes building local capacity through training and hiring of locals, instead of bringing in outside experts.

The Peace Forest is taking hold, and most important, it is self-replicating. New communities, inspired by the example of the Kokolopori Bonobo Reserve, have initiated their own forest conservation programs. In addition to the two nature reserves already established, other active sites now ready for official protection encompass 2 million acres — nearly 11 million in total. This is creating a large area of locally grounded protection for bonobos, covering almost 10 percent of their range.

The effects of the Peace Forest extend far beyond the borders of the rainforest itself. While protecting wildlife and creating opportunities for Congolese communities, the Peace Forest also preserves vast tracts of rainforest, sequesters carbon and helps mitigate climate change. This is not only a benefit, it is a necessity for all life on Earth — helping the bonobos helps us all. Although bonobos and their rainforest habitat may seem worlds away from the Pioneer Valley, BCI’s conservation model can inform grassroots, local efforts here and globally.

Sally Jewell Coxe is president and co-founder of the Bonobo Conservation Initiative. She will be presenting a multimedia talk at the Hitchcock Center for the Environment June 7 at 7 p.m. Click for more information or to register, or call 256-6006. Learn more about BCI or to support their work.