Pioneers or invaders? Let’s be less judgmental of traveling plants 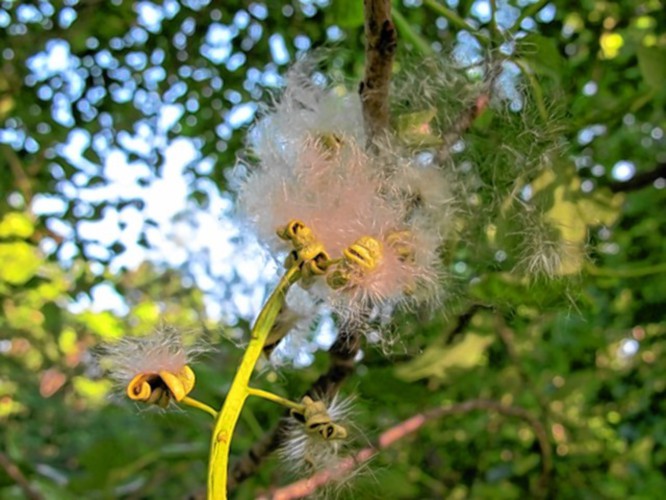 Cottonwoods spread their millions of seeds on the wind, allowing a few of them to land in newly opened or disturbed habitat, where they can establish new stands. Kristine Paulus/Wikimedia Commons.

Pioneer, fugitive, invasive, colonist, weed. Each of these words evokes images and emotions in a reader, and each has a meaning, indeed broadly overlapping meanings, for ecologists.

When a new area of a habitat forms, for example, as the result of fire, landslide, flooding, bulldozing, etc., certain species are usually the first to arrive. These species can be thought of as “colonists” or “pioneers,” the first of a new suite of organisms to be established in such locations.

What allows these plants and animals to be the first to arrive and become established?

Typically these opportunists produce many small, mobile offspring, well-adapted to travel to unpredictable new patches of habitat. This approach to reproduction and dispersal contrasts with that of species that put more resources into each of fewer, larger, less mobile young.

In early summer a mature cottonwood releases huge numbers of small seeds that are carried far by their wind-catching fine filaments. Locations miles downwind from a stand of large cottonwoods may receive a snow-like coating of these seeds.

Each seed has little chance of survival, especially if it lands where other plants have taken hold, but a seed that lands on a recently flooded mud flat or other disturbed land has a chance to set root and become a tree.

Later in the year an oak, by contrast, produces relatively few acorns (hundreds to thousands per tree, rather than hundred of thousands to millions per tree). Each acorn contains considerable nutrients to help a new plant to grow.

These large seeds fall straight down and have little chance of finding new habitat unassisted. Squirrels and jays move many acorns, but the distance covered is usually just a few hundred feet. Thus, cottonwoods typically arrive on newly cleared land long before oaks do.

A pioneer, or colonist, may pave the way for the slower species to follow. The first plants on bare land may erode rocks, establish soil, fix nitrogen or alter habitat in ways that make an area more amenable to other species that eventually arrive. Early arriving plants and animals can establish a food source for later-arriving species.

The language we use to describe the movements of humans and other organisms often depends on our own cultural perspective. One person’s pioneer or colonist might be another person’s invader.

However, not all early-successional or weedy species are invasive — that is, exotic species capable of out competing and squeezing out native species. The species that might be called a colonist or pioneer in a natural setting in its own range may be called an invasive species if it dominates numerous habitats in a different setting.

Species that make many mobile young are well-adapted to disperse to new habitats but are often not well-adapted to compete with other species in more complex settings. Such a species might consist largely of ephemeral populations, established for a few years as patches open up and then disappearing as better competitors eventually arrive. The ecologist G. Evelyn Hutchinson called these organisms “fugitive species.”

Although Hutchinson was writing about minuscule copepods in new lakes and ponds, the term “fugitive” has been applied to many other groups, including some birds and mammals that specialize in newly opened habitats.

For example, the golden-winged warbler inhabits land with very young trees (typically aspens about 10 years old) but gives way to its close relative the blue-winged warbler as the saplings grow older.

The blue-winged warbler, in turn, disappears well before the area becomes mature forest. Such birds, unlike the pioneering plants, are not more fecund than other birds but apparently have an eye for appropriately young habitat.

With much of the land in New England either in maturing forest or developed for human use, many species that specialize in inhabiting intermediate stages of plant growth have declined in recent decades.

To help species like the blue-winged and golden-winged warblers and the New England cottontail rabbit, the U.S. Fish and Wildlife Service is proposing to create a new national wildlife refuge spread over locations in several states. The “Great Thicket” refuge would maintain habitat in stages suitable for pioneers and fugitives.

Following the words of poet John Keats, perhaps we’ll use the word “weed” not judgmentally, but to celebrate all plants, including the fast-growing plants that create new habitats for all:

My herald thought into a wilderness:

There let its trumpet blow, and quickly dress

My uncertain path with green, that I may speed

David Spector is a former board president of the Hitchcock Center for the Environment in Amherst and teaches biology at Central Connecticut State University in New Britain, Connecticut. Information about the proposed Great Thicket refuge is available.