Plant changes brought by climate changes will force us to change, too 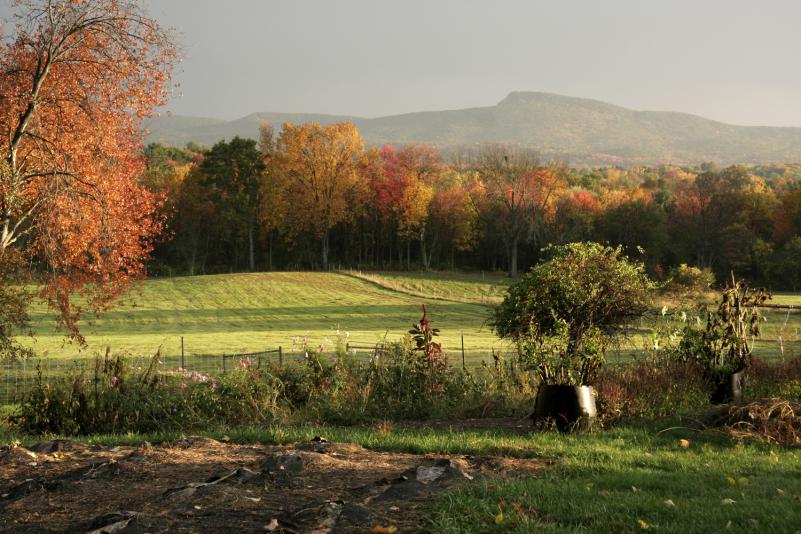 Rebecca Reid Maples and other hardwoods, as seen from Bramble Hill Farm in Amherst. Some dense stands of maple may disappear from New England due to climate change.

From the Vatican to the White House we are hearing increased acceptance of and concern about climate change.

Even the U. S. military has finally acknowledged that sea level rise is a threat to national security, such as causing the flooding of Norfolk Naval Base.

We find our attention grabbed by dramatic events such as storms, drought and sea-level rise. Yet more subtle changes may be even more significant for long-term prospects of the world as we know it.

As a botanist, I’m particularly concerned about what effects climate change will have on plants. We depend on Earth’s photosynthetic denizens for food, fiber, medicines and important ecosystem services. What will happen to plants — and hence to us — as the planet continues to warm?

Some answers are emerging and, as often happens with living systems, the story is complicated.

For example, one Canadian study showed that the time of first flower bloom for 19 plant species moved up an average of nine days in 12 years. Most of this change could be explained by an increase in the average annual temperature. Yet some species showed large changes, while others changed little if at all. Why such differences?

In May, I attended a symposium sponsored by Harvard University’s Plant Biology Initiative titled “Plants in a Changing World: From Leaves to Ecosystems,” which highlighted what scientists have been discovering about the relationship between plants and global climate change. Historically, plant scientists have looked at the effects of carbon dioxide (CO2) concentrations and temperature on plant growth, often concluding that both will cause an increase in growth. This has led some to forecast higher crop yields and faster growth as the Earth warms.

But the story is not that simple. For instance, a 12-year study reported by Carol Augsburger of the University of Illinois found a complex interaction between understory plants and the mature trees that can shade them out. Although plants use both day length and temperature to determine growth rates, Augsburger found that saplings were responding more to warmth than day length in order to keep ahead of the larger trees that were leafing out earlier due to temperature changes. Faster growth earlier in the season costs the saplings energy, but becomes necessary to ensure survival.

In another long-term study, scientists at Oak Ridge Laboratory in Tennessee artificially increased the CO2 concentration around a natural stand of sweet gum trees and found markedly increased growth in the first year. Increased growth was not sustained over time. Living leaves and litter had lower nitrogen concentrations in the second year, so perhaps soil nutrients quickly became limiting for tree growth. Clearly, we need to look to more than just increased CO2 concentration to understand climate change.

Swiss botanist Christian Körner also made a convincing case that focusing so closely on carbon dioxide is a mistake. He pointed out that the effects of climate change, in particular changes in rainfall, evaporation and water in the soil, have a much larger impact. Plants respond to dry situations by closing their stomata (leaf “pores”), but by this time leaf cells have already become water-stressed. We can’t count on increased CO2 to offset the loss of crop productivity brought on by water stress resulting from changes in rainfall and temperature patterns.

Furthermore, he said, we have to continue to look at the effects of climate change on ecosystems rather than on individual species.

So what is likely to happen to plants in the face of climate change and what should we do in response?

James Ehleringer of the University of Utah had a simple and provocative answer: They will be fine! Plants have been adapting to climate change, he said, particularly in the desert ecosystems that he studies, for millennia. The abundance of some plants will increase, some will decrease. Local extinctions might occur, but global extinctions should be rare as long as conditions are suitable somewhere; plants with long-distance dispersal methods (e.g., wind, birds) will have a better chance of landing in favorable habitat.

Here in New England, we can expect changes in the composition of our woods, over decades. Our dense sugar maple stands may disappear, as more southerly species fill the habitat left open by less vigorous maples. But there will be forests as long as there is rain — unless we tear them up in our efforts to feed and house ourselves.

Perhaps the most important message from the symposium was that, although plants will survive, they may not be available to us in the same ways and the same places that we have been accustomed to. As they adapt, so will we humans need to adapt if we expect to continue to live as we do now in the warmer world to come.

Lawrence J. Winship, a former member of the Hitchcock Center board, is a professor of botany in the School of Natural Science and director of the Southwest Studies Program at Hampshire College in Amherst.