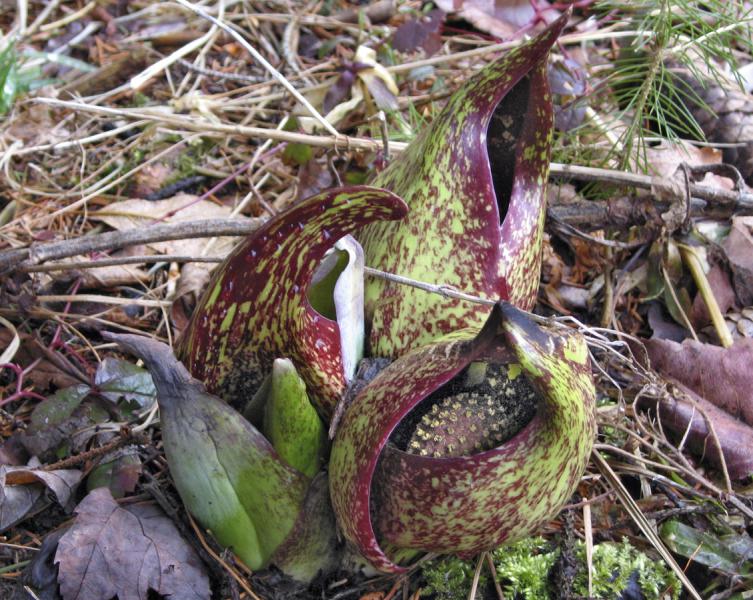 Especially in low, wet areas and along streams under trees, you can find dozens poking up through the snow. Not really visitors from another planet, each fleshy sheath, called a spathe, hides the hundred or so flowers of the skunk cabbage Symplocarpus foetidus, the most northerly species of the diverse and very ancient arum family. (Arums show up in the fossil record in rocks formed before the breakup of the continents, and before the demise of the dinosaurs.)

Later in the spring, after these spathes have finished their work and some have become seed pods, the plants will unfurl large light green leaves that look something like cabbage leaves but don’t try to eat them! At least, that is, not until you have boiled the leaves in several changes of water to extract the large quantities of oxalic acid. And, all parts of the skunk cabbage give off a skunk-like odor when crushed, hence the name, so even boiled skunk cabbage is not likely to smell appetizing. Moreover, skunk cabbage leaves resemble those of false hellebore, Veratrum viride, which is quite deadly so be careful what you pick.

Mainly a tropical family, arums include huge climbing philodendrons, the enormous titan arum and taro. “Skunkies” grow luxuriantly in swamps and fens all the way up into Labrador.

They share many characteristics with their southern cousins. The flowers inside the spathe are spirally arranged around a central column, forming an egg-shaped organ called a spadix. The female parts of flowers mature first, over about seven days, then the male parts begin releasing pollen from the top down over 18 days with a short, two-day overlap. Later in the spring, look for a similar arrangement in another northern arum, the Jack-in -the-pulpit.

Most arums produce noxious odor and have a striking ability to generate heat, which accounts for melted snow around the plants. At certain times of day, skunk cabbages cells burn sugars at a high rate without extracting chemical energy for growth, simply generating enough heat to raise the temperature inside the spathe to well above the surrounding air. Moreover, heat production sometimes shows a periodic cycle of about 60 minutes, and is regulated such that temperature inside the spathe stays between 72 to 81 degrees Fahrenheit even when the outside air temperature is well below freezing. No wonder they melt the snow around them.

Because the pollen and seed-producing parts of the flowers on the spadix inside the spathe mature at different times, the pollen in one skunkie cannot pollinate the female flowers in the same spathe they must get pollen from another plant. With such early flowering, it’s worth asking what kind of insect pollinates them. Some scientists have speculated that the heat generation and the noxious smell might go together to waft enticing smells to flies or attract carrion beetles.

A reward for carrying pollen between skunkies might be warmth or protein-rich pollen or both. One Mediterranean relative, the dead-horse arum, releases an overpowering stench that brings blowflies from miles around. The flies, trapped inside the flower by recurved hairs, buzz around depositing pollen until they are released as the hairs wilt the next day. But what do our local arums do?

As yet, there are no definitive answers.

Close observation of skunk cabbage flowers has turned up a diverse array of possible pollinators, including a number of flies, which might deposit eggs as they would on carrion. Mosquitos and other insects may follow a plume of carbon dioxide generated by the high rate of respiration in the spadix.

Odor may be important, too, though the intact flowers of skunk cabbage are not always as pungent as they are when crushed. Interestingly, one study reported numerous visits by honeybees, but only to skunkie flowers giving off an odor as detected by the author’s own nose! (This suggests that bees and people have similar detection thresholds for skunkie emanations, though they differ as to their reactions.)

Pigmentation might also play a role in attracting insects, especially bees. All of these are possible. Overall, though, one gets the impression of a pollination system on the edge; most studies show that only about 10 percent of flowers set seed.

So, it may be that we really have a lot more to learn about “skunkie secrets.” Perhaps heat generation, which is essential for spreading smell and bringing in pollinators in warm climates, has taken on an additional significance in the North, actually warming the flowers and speeding up flower and seed development. Could a mechanism that evolved for one purpose in the tropics have allowed the spread of other arums up into snow country?

The next time you find a stand of skunkies, hang around for a while and watch. What insects are coming and going? Can you smell anything coming from the flowers rotten meat or just fine aged cheese? The human nose is remarkably sensitive, but you still might have to get your knees muddy, to learn the secrets of the skunkie.

Lawrence J. Winship, a former member of the Hitchcock Center board, is a professor of botany in the School of Natural Science.