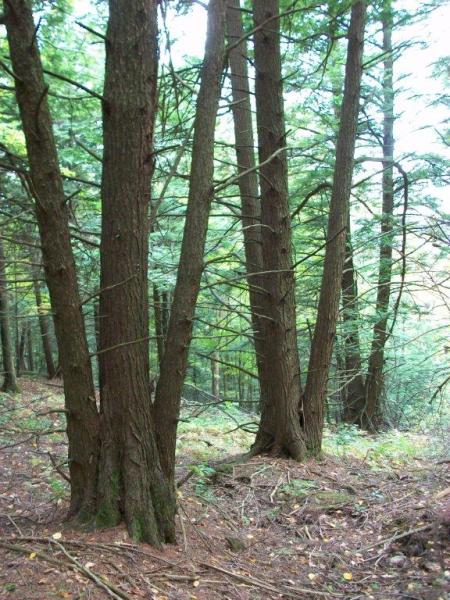 What makes a particular spot a great place to hike and explore? Diversity, ecology and topography are what grab me, and Putney Mountain in Putney, Vt., with its long ridgeline and forested slopes, has them all. The entire reserve comprises some 1,800 acres and 14 miles of trails, so I can only give you a glimpse here of the pleasures in store for the visitor.

The mountain’s north-south orientation provides for at least two diverse habitats for plants: The west side is generally warmer than the east. This arrangement allows for a potentially wide variety of plant species. Topography — the lay of the land — is another factor promoting Putney Mountain’s ecological diversity. This is clear even on the short stroll along the Ridge Line Trail, the main trail from the parking lot that travels to the beautiful summit. About halfway up the trail, near its edge, a flat area has created an opportunity for water to collect, allowing a “perched wetland” to form. Here you can see moisture-loving plants like jewelweed, monkey flower, tear thumb (ouch), turtlehead, cinnamon fern and even cattails.

Directly opposite this spot is the thinly soiled ridgeline with its exposed bedrock of schist, creating a much drier habitat that supports its own interesting mixture of plants as well as animals. Here you might find the perfect dome-shaped nests of the ovenbird built right on the ground from leaves, twigs and plant fibers, in among an assortment of red maple, hemlock and birch, which are slowly being over-topped by white pine and oak. Also in this habitat you can see a fascinating and fragile plant association that I call a condensation garden. The bare, relatively cool rock, when exposed to the humid mid-summer air of July and August, sweats like an ice-cold drinking glass on a hot day.

This condensation offers a perfect, albeit ephemeral, source of water that supports the growth of a variety of lichens. In turn, the abundant, though highly localized growth of lichen supports a diversity of other species, such as the painted lichen moth that feeds on lichens during its caterpillar phase.

One September years ago, I decided to go on a hawk watch and took the Ridge Line Trail to the summit. I was rewarded with an abundance of migrating hawks — about 600 birds per hour flew past! Needless to say, I returned the next day and for several days afterward. On one of those days, though, I decided to take an alternate route to the summit: the West Cliff Trail. The trail itself was so spectacular, as it traversed the western slope of the mountain, that it stopped me in my tracks. Each day I returned, I took more time on the trail, walking slower and slower, and spending less and less time watching hawks on the summit. Finally, I took the trail, walked about halfway, stopped and just leaned against a tree. I forgot the hawks as the trees caught me in their spell: I marveled at their density, species mix, age and growth patterns.

One phenomenon in particular stood out — a dozen or so “coppiced,” or multiple-trunked, hemlocks. I have traveled all over and seen a great many trees, but these really caught my eye. (The slope got my attention as well. There is no cliff on the West Cliff Trail per se, but the ground slopes down steeply and dramatically nonetheless. It really is mesmerizing to see such a steep slope fully forested.) Sometimes when a deciduous tree is cut down it will grow multiple sprouts from the stump in response, thus the term “stump sprouts.” Occasionally, a few of the dozens of sprouts will grow into mature trees, replacing the one cut down. However, very rarely do conifers such as hemlocks do this. Yet here they were, on Putney Mountain. And finally, to add to my delight, the mountainside also offered ancient oaks, hop hornbeam and several venerable sugar maples — a real treat.

I’ve touched on just a few of the wonders of Putney Mountain, describing what you might see within only about 35 acres of this large reserve. I hope I’ve enticed you to go there and experience it for yourself.

John Foster is founder and executive director of the New England Naturalist Training Center in Northfield. He has conducted wildlife research for the U.S. Fish and Wildlife and the Massachusetts Natural Heritage and Endangered Species Program, and has trained staff for numerous organizations. He is a Commonwealth Award nominee for excellence and leadership as a naturalist.